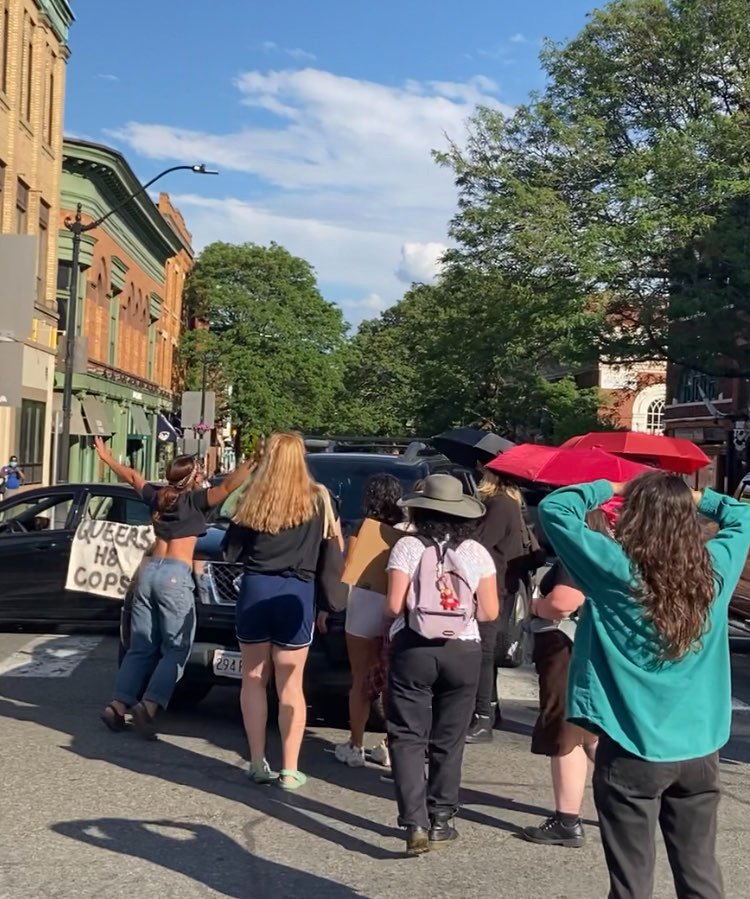 One driver drove slowly through the crowd, no one was seriously injured.

Protesters urging Northampton city councilors to vote “no” on Mayor David Narkewicz’s proposed FY2022 budget blocked traffic downtown on Tuesday afternoon. They said the budget gives too much money to the police department and underfunds the newly established Department of Community Care.

The group marched from the Northampton Skate Park to the Police station, where six NPD officers stood in the parking lot behind metal barriers. Protesters held umbrellas to block the view of the police drone flying above the street. After chanting in the street across from the station, the group moved to the intersection of Main and King Streets around 5:30pm. They lined up to block cars from entering the intersection. Angry drivers honked and yelled at protesters, and one drove slowly through the crowd, pushing two protesters who attempted to block its path. No one was seriously injured.

Near the end of the group’s occupation of the intersection, NPD officers parked at some distance from the intersection on both King and Main Streets and got out of their cars. They did not interact directly with protesters, one of the organizers who wished to remain anonymous, described their presence as threatening. After about half an hour, the group left the intersection and marched back up Main Street.

Police Chief Jody Kasper was not available for comment Tuesday.

The protesters called for the rejection of the budget because it increases NPD funding by 3% and allocates only $424,000 to the Department of Community Care, far less than the $882,000 cut from the police budget last year and recommended by the Northampton Police Review Commission.

City councilors will vote on the second reading of the proposed budget on Thursday. The budget passed during its first reading on June 3rd. Only one councilor, Rachel Maiore of Ward 7, voted against it. The aforementioned organizer expressed concern that the Council will pass the budget on the second reading. “It’s become apparent over the course of a lot of citizen lobbying efforts towards the Northampton City Council that they are not going to follow through on any promises that they might have made last year, as far as being serious about moving in the direction of moving funds away from police and towards something new, something non-violent, and ideally peer-led.”

Another organizer of the protest, who also wished to remain anonymous, is a local activist who has called for increased funding for the Department of Community Care and decreased police funding at City Council meetings. They believe that fully funding the new department will fill an important need in Northampton. “Everyone deserves to have resources invested in a department that actually cares about them,” they said, “that is going in and asking, ‘What do you need? How is your health? What’s your mental health look like? Are you having too much trouble with the kids? Do you need a stimulus? Are you lacking healthcare? What do you need that we can help you with? What’s going on that you can’t handle?’ or, ‘You’re in crisis, how can we be a good neighbor? I’m here.’” They continued, “We need to invest an exorbitant amount of money in our community, to take care of us, so no one ends up on the street, and no one’s kids end up being taken from their homes.”

The protest was organized by a group of anonymous individuals who have connections to activist groups. “It’s just anonymous, well-meaning community members that are working hard to make sure no one falls through the cracks – and those types don’t usually like the police,” the second organizer said.

Protesters said the action went well. “Judging by the gathering of pedestrians all around us and enthusiastic waving from bus riders, we had a lot of public support,” the first organizer said. The second agreed. “Everything was handled peacefully,” they said, “and I’m always very happy when it goes down like that.”