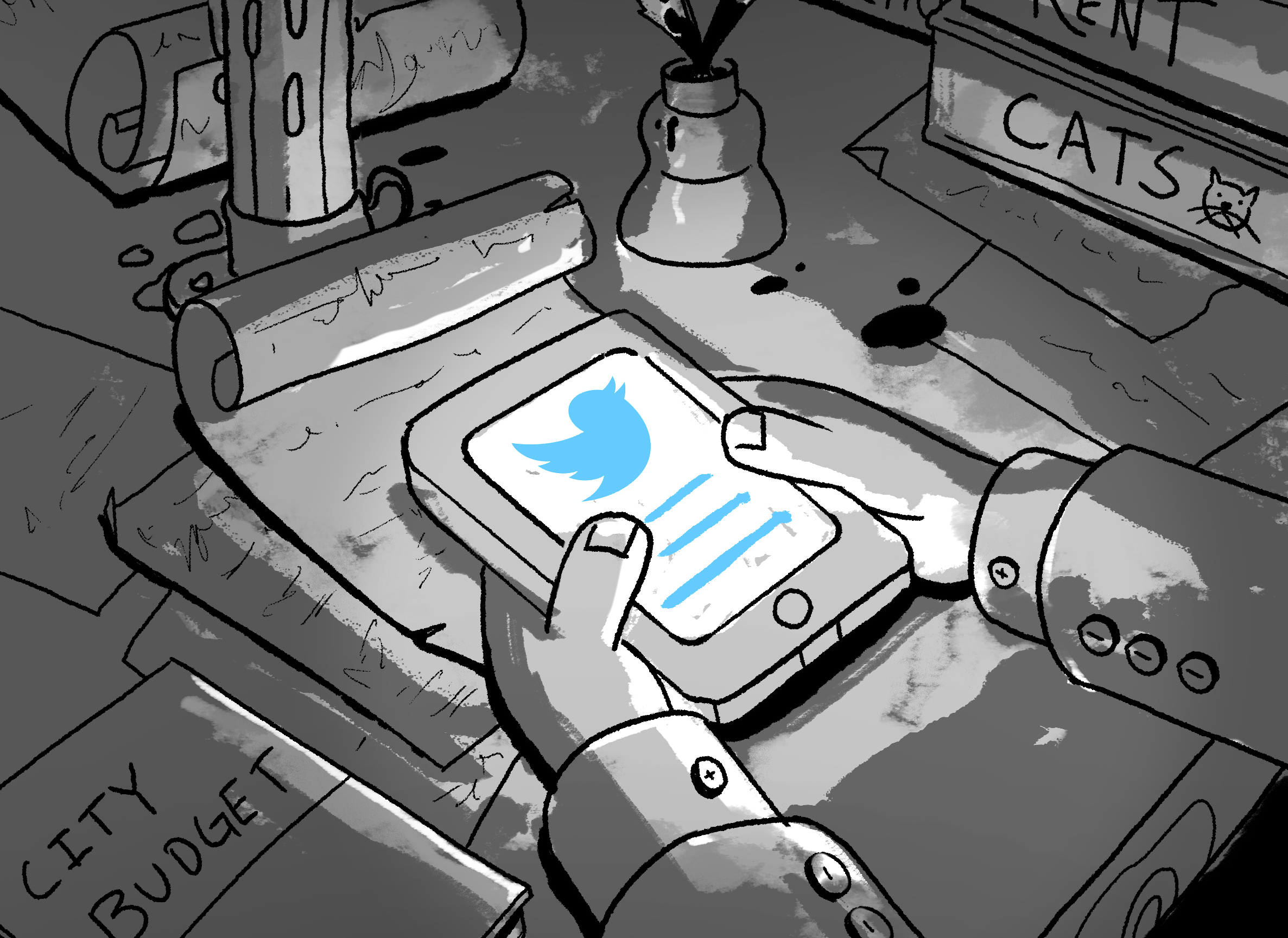 When we applied for our grant from the Northampton Arts Council, we promised cultural reporting. In that spirit, here is a review of David Narkewicz’s new play.

Background Setting: Two Fridays ago, the Mayor of Northampton tweeted a string of angry comments at The Shoestring. To our knowledge, and despite its relevance to the people of Northampton, no news outlet has reported on our Mayor’s unusual behavior.

It was a cold, blustery winter night and unbeknownst to us we would soon be treated to some pop-up theatre. Somewhere, Mayor David Narkewicz sat with his phone and began to write. Every writer needs their inspiration and he found his in a tweet that criticized his city budget. You could simply say, we were his muse. His play was here and there and nowhere at the same time, masterfully blurring it’s true inspiration; at one point abandoning an attack on our tweet and passionately, blindly stumbling into a critique of a non-specified article we published; and finally barrelling into a passive aggressive showdown with our local city Arts’ Council.

The police are requesting funding for ' riot helmets', 'shields,' and what euphemistically known as 'less-lethal weapons' while we slash funding for public transit and hike the fares. The people in power call this 'routine' and 'business as usual'. They're right: It is! https://t.co/Q3p7K8MB5e

In its essence, this play is pure contempt; its motive conjured up by a lust for power hidden behind a veil of budgetary technical jargon; its necessity predicated on the naked ambitions of a politician; its mere existence a sobering artifact of Northampton politics; it is a rare glimpse into the heart of Northampton’s executive, the heart of Narkness. We at The Shoestring just hope it doesn’t end like the last episode of House of Cards during Season 1 did.

The Shoestring crew found ourselves plopped on Blairs’ bed, alternating between two seltzer flavors. We took a break from finishing our pieces to instead read the Mayor’s response to our Twitter comment advocating for less riot gear and more funding for public buses.

Are you seriously implying that state cuts to regional transit authorities are tied to municipal capital spending? Feel free to criticize me all you want, but please don't use serious issues you know or care nothing about as props for your performance art.

In his prelude to his first act, the Mayor chose the genre of ‘non-fiction fiction’. In implying that we, frequent PVTA riders and active campaigners against riot gear, “don’t know or care” about the PVTA and riot gear, he broke through the walls of reality and catapulted us and all of his readers into a hypereal vortex of a land filled with resentment and brimming with mechanisms of revenge. This is where the entire play would take place.

We never expected to collaborate on a script with the Mayor, but there we were, indulging in the creative process together. He took it upon himself to play the villain — an interesting choice for a small town politician, but we went with it. The first thing any acting coach will tell you is, listen to your fellow actor. So we did and compared his smear of ‘performance art’ to President Trump’s infamous taunt of ‘fake news’, as Narkewicz was angrily tweeting at the local press for raising questions he didn’t like. In a bold move for an elected official of a liberal progressive town, he maintained his character and kept tweeting like Trump, this time delivering his lines in third person in what he dubbed a ‘A play in 3 acts.’

When we pointed out that his play was a ripoff of 45’s tweets, he called us “thin skinned bloggers.” We prefer to be called faggots (footnote: we understand that this word has a history. We hope it is clear that, as a publication run in part by queers, we are seeking to reclaim this word.) but this was not our play to write. The Mayor continued with the accusation that we “don journalist costumes.” We were confused because as far as costumes go, we are going for “hipster” all the way and had no idea people mistook us for journalists. He claimed that our reporting is “performance art.” It is difficult to describe the feeling of irony that sets in when a politician calls you a performance artist.

In “Act 4,” the Mayor continued to refer to himself in the third person and again attempted to explain how the PVTA works.

Like Shakespeare, his words require translation for the average reader to hang on. Here is our translation: The PVTA is funded by two sources. The first is the state of Massachusetts which allocates money to the PVTA in its state budget. The PVTA also receives money from cities and towns. It assesses the amount Northampton pays for its services based on the amount of fixed route miles and paratransit passengers served. This money is then deducted from the aid that the state provides to Northampton. This information is important to know. But we feel that the Mayor missed our more holistic point that as a community member, it feels like something is wrong when riot gear is being funded and bus fares are going up. By excluding the public from the elitist conversation and then attacking local bloggers for daring to ask “WTF?” the Mayor is complicit in hiding behind the semantics and jargon of a system that continually attacks the most vulnerable.

After the first and second rounds of insults were hurled back and forth into the digital void, and the mayor fairly called out that we didn’t speak to a city official for our riot gear piece (to be clear our piece was based on city documents and work published by city officials), we tried to be humble, and tweeted the following: “We’d love to learn more about the budget and do a follow up piece with you on the record before the next vote. How about a sit down interview?”

We'd love to learn more about the budget and do a follow up piece with you on the record before the next vote. How about a sit down interview? https://t.co/evg4IysASC

The mayor proceeded to not respond to that tweet. Instead, his final act sought to further discredit our work as he referred to himself as a ‘helpful mayor’, and issued a stage cue: “(lights dim)” to sign off. The lights are certainly dimming in Northampton if this is how local bloggers are to be treated.

Although we sent him an interview request and a follow up, we have not gotten a response at the time of publication. We are not quite sure how we are supposed to talk directly to the Mayor about the budget, if the Mayor refused to talk to us directly about it. We sent an email before we published this piece asking, “Do you have any further comment on your Tweets from last Friday regarding ‘bloggers’?” He responded, simply: “No.”

We can assume he won’t be getting any funding from the Northampton Arts Council for the production of his play. It’s funding may have to be incorporated into the Capital Improvement Plan. While we appreciate the creative risks the Mayor took by writing and publishing an unannounced play in the course of a few hours, we think he hid far too much behind the ego of his villain. A piece of advice we would give is to trade in the ego for some emo, Mr. Mayor. Michael Stipe put it best when he sang, “Everybody hurts…sometimes.” Perhaps the power that the new city charter affords you has added weight to your heavy crown. We urge you to take it off, set it down, and walk toward the people of Northampton and ask for a hug.

The Shoestring is a publication from western Massachusetts. If you appreciate our work, please consider supporting us on Patreon.