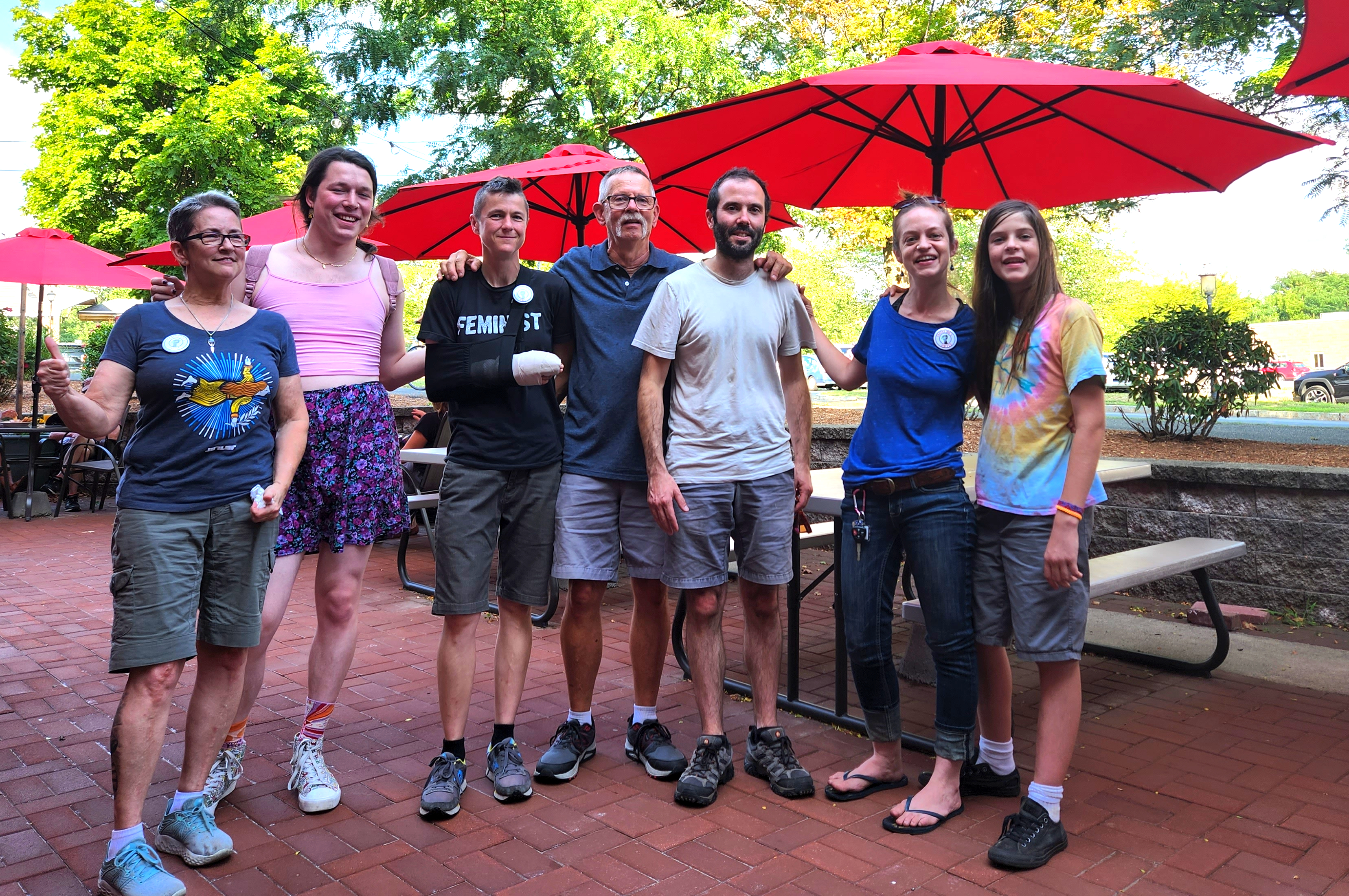 On Thursday July 28th, Trader Joe’s United (TJU), an independent union organized by the Trader Joe’s store in Hadley, won its union election. The results were 45 in favor, 31 opposed, and one voided ballot, with 81 employees eligible to vote. The NLRB election was the culmination of an organizing drive that TJ crew members began during the pandemic and went public with in May. The Hadley store is the first Trader Joe’s to go union in the chain’s history.

The Shoestring met up with TJU after their historic victory on Thursday evening at Progression Brewery in Northampton, where over beer, pizza, and nachos, workers were celebrating their win with friends and family.

Throughout their public campaign TJ crew members were confident they had the votes to win. We spoke with Maeg Yosef,  who said, looking back on the organizing effort, “It was very hard, in a way it seemed impossible, but in another way it was easy because so many of us wanted a union.”

Among TJU’s priorities for their union contract is pay, safety, and retirement benefits. According to Yosef, retirement benefits have consistently been cut over the last decade. As of last year, Trader Joe’s no longer offers any assured retirement benefits. “When I started 18 years ago, 15% of what we made the previous year would go into our 401K. Eight years ago, that dropped to 10%. Last year, Trader Joe’s quietly withdrew any certain percentage and changed its policy to a discretionary percentage that would be decided by corporate year to year.” Yosef continued, “We did get a contribution this year, but it was half of what crew members expected. We are unable to plan for our future with this kind of policy.”

Like the recently formed Starbucks Workers United (SWU) and Amazon Labor Union (ALU), TJU is also an independent union not affiliated with established food workers unions like SEIU or UFCW. Yosef shared that TJU went independent because TJ workers wanted a union that met their specific conditions. “Trader Joe’s has a unique culture, the way it does business, we enjoy that about our jobs. By having an independent union, we can address that unique environment the best by just having it focused on Trader Joe’s.”

Yosef contextualized this victory in the wider frame of the unionization wave of making its way across the country. “For some people things might be going back to normal, but after the pandemic, we as workers see how valuable we are. These companies can’t function or turn a profit without us. We deserve a seat at the table where the decisions that affect our lives are made.”

There are over 530 Trader Joe’s stores across the U.S. Since the Hadley store filed its petition to unionize, a Minneapolis store has filed to join TJU, with an upcoming election scheduled for August 11 and August 12. Additionally, a store in Boulder, Colorado, has filed a petition for a union, not as an independent union, but to join UFCW Local 7.

At the gathering, crew members learned that Trader Joe’s had recognized their union, but had also suggested that negotiations start by using template contracts from existing unions. “We are willing to use any current union contract for a multi-state grocery company with stores in the area, selected by the union representatives, as a template to negotiate a new structure for the employees in this store,” said a statement issued by a Trader Joe’s spokesperson.

Yosef responded, “We will not be moving forward with a boilerplate contract, we will be negotiating our own contract and we will determine our priorities as a group.” She added, “We are going to take a beat, celebrate, and then get down to the nitty gritty.”