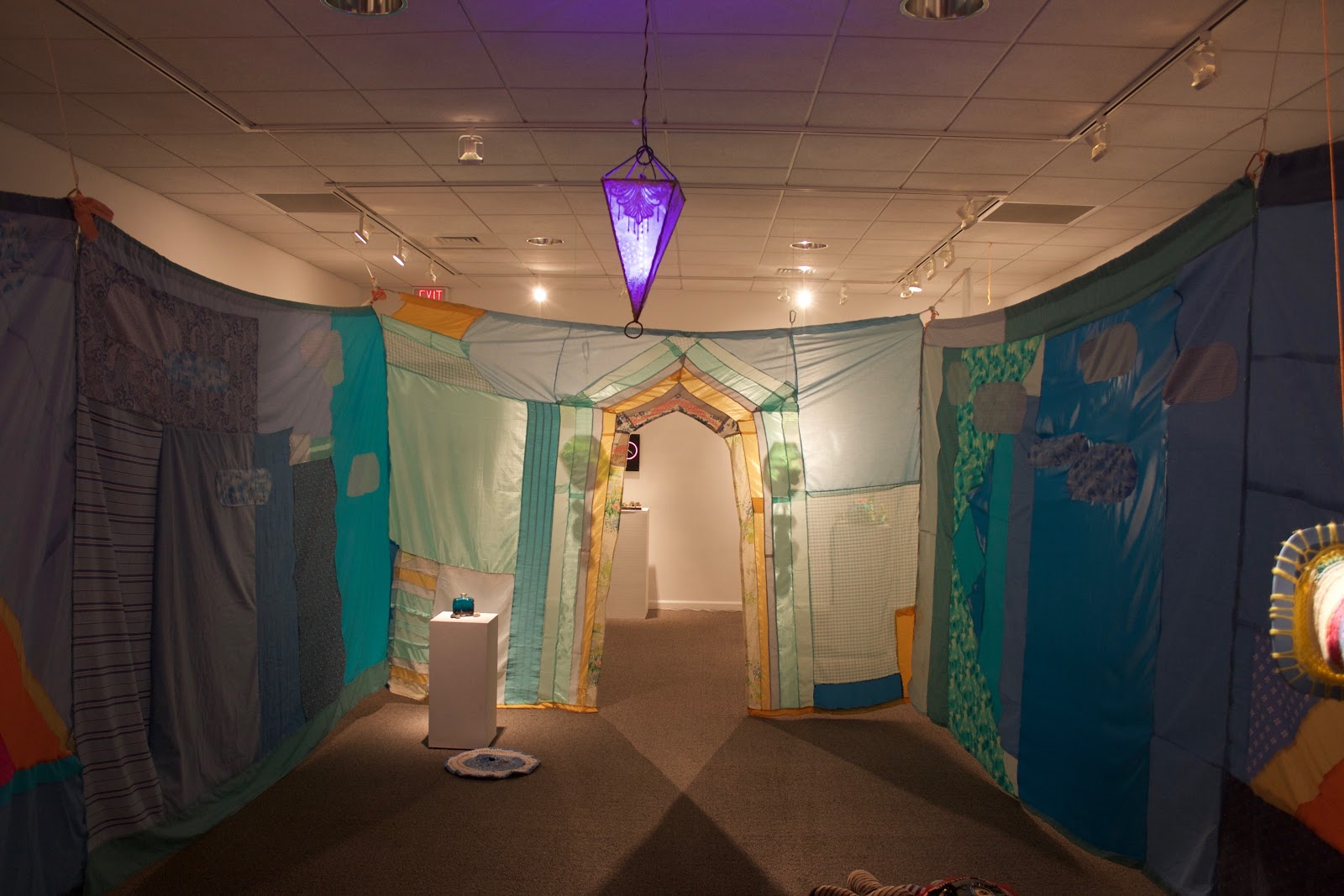 Anya Klepacki’s debut solo show at the Taber Art Gallery, located in the library of Holyoke Community College, is a space for participants to escape from the mundane. While the gallery itself is an escape from the outside world, Klepacki asks us to intentionally engage with the ways we choose to escape from reality – from fantastical television shows to organizing DIY music, what roles do imagination and escape play in our lives?

Within the walls of the gallery is a fort-like fabric construction of four walls, two entrances, no ceiling. Viewers are invited into this fabric structure to lounge, play, discuss, look, listen, and touch. Inside are plush objects shaped like fantastical creatures for laying on or playing with. One of these figures, titled “Unknown figure: collective baby monster” is a bizarre stuffed figure of four stuffed cloth appendages all attached to a central circular pillow. The pillow has three fabric eyes, and could be the baby monster, or a toy for a baby monster. Other works within the tent are a hanging knitted tube to peer into, and a stand with a small glass bottle that contains little objects like a treasure chest containing a human tooth, little plastic plants that would go in an aquarium, and is covered with blue resin to resemble water — a tiny world in a bottle. Hanging from the ceiling is an oblong triangular lamp, where each side is made out of fabrics of varying textures and colors, and the color of the bulb gradually changes. What Klepacki has created in the middle of this show is like nowhere you’ve been before, an intentional respite to be in your own imagined places.

Outside of the tent there are illustrations in detailed painted frames, dioramas of miniature worlds and nature scenes, altered and expressive clothing, and mixed media sculptures. Most of the back wall of the exhibition is filled with hanging articles of clothing – jackets, dresses, jumpsuits. Each piece has been altered or made by hand, many of which are painted with “values” like “see through the bologna” and “no flakes,” intended to shout and declare. Everything we wear says something about us —  what does it say about the worldview of the wearer of jackets? According to Klepacki, the clothing is “meant to be something that you could wear, that is shouting this value that you want to live by.”

The dioramas moved me most. “Unknown land 7: Techtopia” is less than a square foot in size and reflects the light from the holographic plexiglass, glitter, and mirrors used — contrasting others that have no human presence. Looking down on a mini dream world, the viewer sees a trippy little utopia. This piece is very fun to look at, and more fun to imagine yourself existing within. A fake bird sits atop a green motherboard. Small plastic orange cars sit atop a road made of glitter and silver stars. There are six other dioramas in this show, two of which mirror each other as flanking the front entrance to the tent. Another diorama is an open pit mine of death, where little figurines peer into the dark expanse of a painted bucket — perhaps contemplating the dying environment us life-size figurines have willed into existence.

If the Future of the World Can’t be Depended on, I’ll Make My Own is more than a collection of interesting, whimsical art objects. It is a testament to using the depths of our imagination as a tool for creation, of envisioning and building a future that we want. It is also a space for questioning how, why, and when we escape from the pain and mundanity of reality. It asks us, when we re-enter the “real world,” what have we learned from our time away. In an interview with the Shoestring, Klepacki stated that the concept of the show was to create a space for viewers “to reflect and consider how each individual person, or group of people use escapism and ideals to make their own space, reshape their own space, or fill the gap in some way outside of general institutions and state structures.”

In addition to the show, Klepacki compiled a research companion, an open-sourced Wiki page, that is intended to provide examples of individuals and organizations participating in fantasy, imagination, and escapism to “fill the gaps” of what reality is unable to provide. From SpaceX and Standing Rock to BDSM and the Black Panther Party, the research companion offers real examples of turning fantastical ideas, running the gamut from dystopia to utopia, into a reality. It is available to browse through in the gallery, and is also available as a community compiled resource that can be continuously added to after the show is over.

In addition to being a practicing artist, Klepacki co-founded the Rust Temple in Easthampton, which offers “semi-autonomous zones”—10×10 ft. plots—for rent. Described by Klepacki as a “Micro-metropolis,” which attracts scientists, journalists (The Shoestring office is in the Rust Temple), and artists among others, Rust Temple is “more than a studio space, it’s the idea of bringing people together who wouldn’t necessarily share space in their daily life.” Rust Temple itself is an example of bringing a fantasy to life.

For Klepacki, creating the show was, in their own words, “my own example of this fantasy world that I’ve been making all along and didn’t realize it.” The idea of the fantasy space was the thread that tied much of their previous work, theory, and political beliefs together. “The show came to be a reflection on my visual work and where I’m coming from, but also what I’ve been thinking about for the past ten years. Really since I saw an Inconvenient Truth when I was 13.” Klepacki continued, “I’m trying to direct people to this train of thought I’ve been on for awhile by asking, what do you want, how are you going to make it happen.”

The urgency for imagination has never been greater than now. “If we don’t take this moment to listen and imagine and really play with and massage our own imaginations about what we want, we’re going to be so limited by what’s around and what’s already not serving us.” Rather than building toward a collectively imagined and beneficial future, we often operate in a framework that dulls our imaginations. Klepacki’s show asks us to grapple with these contradictions, and to ask ourselves how our imaginations can materially change the world we rely on.

If the Future of This World Can’t Be Depended On, I’ll Make My Own is on view at the Taber Art Gallery until March 21st, 2019. A gallery talk with the artist will take place on March 21st from 5-6pm.

Kate Nadel is a political activist and community member in the Pioneer Valley.