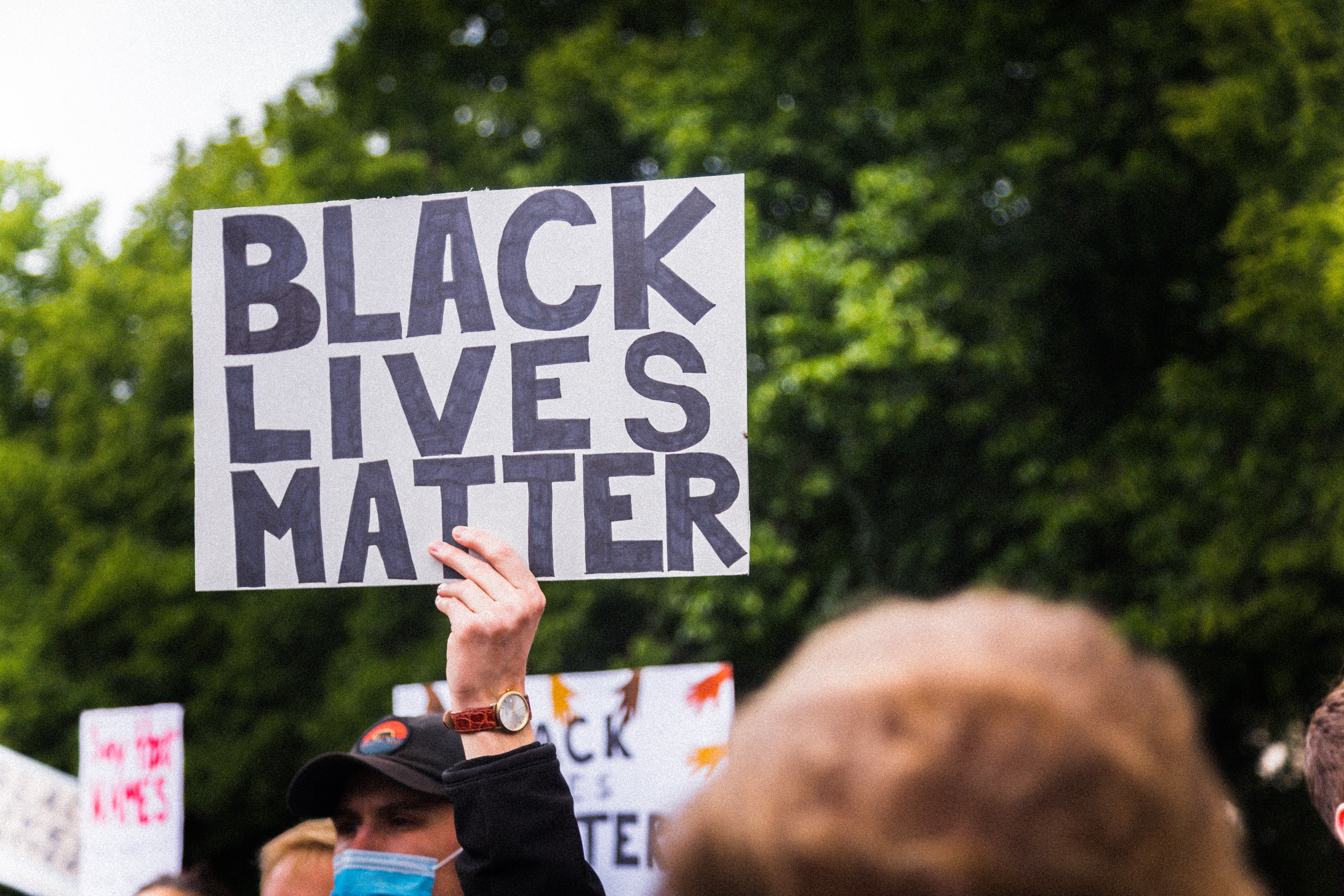 It wasn’t dramatic. I didn’t go out into my nice front yard, yank my Black Lives Matter sign out of the ground, give a self-righteous speech to my neighbors about how signs weren’t enough, and then lead the growing crowd carrying handcrafted artisanal pitchforks down to City Hall.

The truth is that one day after mowing the Iawn, I just didn’t put the sign back up. I had done nothing to act on my “belief” that Black Lives Matter other than put up a sign that said  “Black Lives Matter.” It was  progressivism by proxy. With its fade-resistant bold text, and the way it stood up to the hostile honks and bird flipping of passing motorists, that spunky square of corrugated plastic was working harder than I was.

What if my grandkids ever asked what I did about racism? Well, I could say, “I read several books about the concept of whiteness.” Or “My Facebook posts were fearless.” And then I’d make them go down to the basement and dig up that old sign and tell them, “Ah there it is, the hardest thing I’ve ever done, putting that Black Lives Matter sign right in my front yard.”  Wiping away a tear, I’d look at them hard and say, “I don’t regret it one bit.”

My sign had become less a rallying cry and more of a sedative. I had grown “high on my own supply.” And why not? I am a white middle-class boomer citizen of Northampton. We are comfortable, connected, and supremely confident that we are Very Good People. We volunteer. We’re kind. We practice precision recycling. We love the music of all people! So isn’t it possible that the signs popping up like magic mushrooms could just ”vibe” black lives into mattering?

I know I wasn’t the only one who believed those three words were incantatory. During public comment at a City Council’s meeting on police budgets in 2020, a former longtime Northampton journalist, who now works in law enforcement, suggested that instead of reducing police funding, we should paint the words “Black Lives Matter” on Main St. She cited the BLM road murals in DC and other cities as models. Like so many others across the country she thought the message might be heard if only the font was large enough. Sadly though, as Charles Blow’s recent NYT piece the Great Erasure chronicles, Black Lives Matter street art, “the largest proliferation of street art around one idea or issue or event in history,” has been removed or disappeared in many cities since the 2020 uprisings. (As The Shoestring previously reported, the city of Northampton swiftly removed a memorial to George Floyd commemorating the one year anniversary of his murder by police after then Mayor Narkewicz described it “vandalism.”)

The City Council did not take the former journalist’s advice and in June 2020, apparently moved (at least temporarily) by hours of testimony about the harm policing does in Northampton, did vote to make a slight reduction to the police budget. The Council also initiated the Police Review Commission and then approved its proposal to fund the Department of Community Care. (I’m grateful to the Councilors!) These actions made the lawn signs meaningful because they were an endorsement of the real change taking place. At the time we still connected the assertion “Black Lives Matter” to its origins as a response to police murdering black people. Eventually, at least on my lawn, it devolved into a bloodless beacon of my own theoretical wokeness.

And just as the sign’s meaning changed, elected officials soon began to show remorse after their momentary indiscretion of hearing and acting on the demands of hundreds of people. What followed that 2020 budget cut was the now familiar municipal “kiss and makeup” ritual between some on city council toward police. You could almost hear the “Honey, I don’t know what got into me!” tone from some councilors.

Two years later, and that atonement continues. At the most recent budget hearings (6/2/23), Chief Kasper decried the “damage” to morale and staffing levels caused by the slight budget reduction of 2020. Several councilors said they found the Chief’s words “sobering.” I don’t recall the description “sobering” used by Councilors to describe the many first-hand accounts of NPD misconduct by speakers at the public comment section of the City Council budget meetings in 2020. The words most often associated with the 550 people who attended those meetings is “Small loud group.”

But aren’t we all a little bit like the City Councilors? We want to believe what Chief Kasper says. (Even when we get so little data from the NPD to answer key questions). As one local journalist advised during the Northampton City Council public comment in 2020, “People in Northampton should protest in Minneapolis or Ferguson, not here in Northampton. We don’t have those kinds of problems.”

But do we really believe that policing in “paradise” is somehow better than it is in those other places? We seem to believe that we’re about 14% better than other towns in the area, so I guess our police benefit from that grade inflation too? But are we so unlike our neighbors in Greenfield, where blatant racism exists within the police leadership, or in Springfield or Pittsfield where police murdered men of color, each having a mental health crisis? The Shoestring has reported on the NPD’s misdeeds, which include assault, vile racism from top brass, falsifying police reports, and much more.

Which brings us back to the Black Lives Matter signs. Those signs allow me (and maybe some others too?) to have it both ways. I can “brand” myself as someone who cares a lot, but I don’t actually have to do anything to show it. My brand says “I’m edgy,” “I put my beliefs right out there!” but my actions say “Yeah, it’s complicated, plus you know, my godfather was a policeman, and also, police once did a nice thing for my mom, and also, the most important thing is to be civil. Right? And also, I don’t want the City Council and all my fellow middle class boomers not to like me!”

But change isn’t going to happen in a paradise of chummy conformity. City officials are not going to act on police harms unless we get them to do so by our actions. Signs won’t do it. Signs are “team players” for a team that never wins.  Actions, the kind that pressure elected officials to do something, are by nature loud, disruptive, and, worst of all—if you pay attention to Gazette op-eds on the subject—“uncivil.” But there is no “civil” way to get some elected officials to acknowledge the true cost of policing in Northampton when they absolutely do not want to know.

If you want to live up to your sign, I urge you to consider some small ways to do it. Learn more about the issues by reading the The Northampton Policing Review Commission Report, and visiting Northampton Abolition Now. Read Shoestring articles on policing and watch this video. Listen to the videos of City Council discussions and public comments when police issues are being discussed. You don’t have to be an abolitionist to want to reduce police harms, you just have to be willing, at least sometimes, to follow the signs.

Cathy McNally is a communications consultant and lives in Northampton.