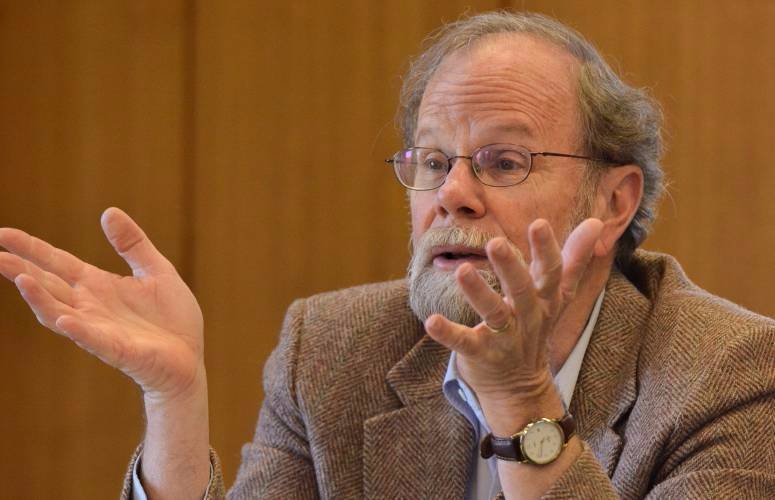 Recently, The Shoestring published an in depth history of Mayor Narkewicz’s so called Work Group on Panhandling. Shoestring co-editor Blair Gimma dug through countless Youtube clips and minutes that documented obscure city council committee meetings in order to piece together what public knowledge is available about the secretive group. The work group — which includes members of the police department, service organizations, and the chamber of commerce, but not people who panhandle — will likely recommend policy that will affect Northampton’s poorest and most vulnerable residents.

One of the quotes from Ward 2 city councilor Dennis Bidwell, unearthed in Gimma’s research, is quite disturbing. When discussing those who engage in panhandling (or ask for money on the street), Bidwell went to great lengths to distinguish between those who are deserving and those who are undeserving. In a May 15th, 2017, Committee on Community Resources meeting [see video clip here], when Bidwell was reporting to the city council sub-committee on the work group’s progress, he claimed that certain panhandlers are “gaming the system.” Here is the quote in full:

One common ingredient in what everyone [members of the Work Group on Panhandling] has had to say is that there is a desire to distinguish between folks who are in need of services and who are worthy of the community’s compassion and assistance in the variety of forms in which we express it, and there are folks who, totally legally within their rights, are nevertheless kind of gaming the system by coming into town representing themselves as either a veteran when they are not, or as homeless when they are not, or expecting a child when they are not. They are totally within their rights to do so, but there is a sense that they are kind of gaming the system and are here just to take advantage of the good will of people who really want to support the folks who are in need. So figuring that out, if there is a way to really focus the community’s compassion and services and dollars on truly needy and at risk populations as opposed to the folks who are kinda gaming the system. I think there is a desire to figure out a way to do that.

As soon as Bidwell finished, Councilor Alisa Klein quickly interjected that rich white men and corporations are gaming the system a lot more than anyone who may be misrepresenting them-self on Main St., and said that she took offense to his comments.

When I watched the clip and read the quote, I couldn’t help but think of Bidwell’s career as a consultant in the obscure field known as real estate philanthropy. “What is a real estate philanthropy consultant?”, you may ask. Bidwell’s job is to help individuals and institutions donate surplus real-estate to charities or other entities with tax-exempt status. Councilor Bidwell runs a firm called Bidwell Advisors that assists often wealthy donors in gifting property.

In a blog post titled  “What Is the Profile of a Likely Real Estate Donor?”, Bidwell eludes to research but leans on hunches—“I venture to say that at least 80% of real estate donors fit this pattern.” He describes the type of person who might fit the demographic profile of a potential real estate donor: 65 or older; the donor owns multiple properties, typically as vacation or investment real estate; they’re tired of the burden of maintaining multiple properties; perhaps most of all, though, the potential donor is hoping to receive the tax and financial benefits of charitable real estate giving. As the post notes, as much as 40% of (wealthy) people’s assets are tied up in real estate, and charitable giving is a good way to unlock substantial economic benefits. In another blog post on Bidwell’s website, titled “Ethics of Engaging Seniors about Possible Real Estate Gifts,” Bidwell urges real estate philanthropy practitioners to exercise restraint and conduct due diligence before making asks of potential donors, heeding to their best interests.

Of course Bidwell’s consulting hustle — where he has worked with numerous top-tier colleges, universities, hospitals, and the like — is merely a symptom, certainly not a cause of how philanthropy, often and systemically, enriches already wealthy institutions while shelling out benefits to the already rich. Take Harvard, one of Bidwell’s clients. Peter Kimball, Director of Gift Planning at Harvard, offered a testimonial on Bidwell’s website, saying “There has never been a better time for charities to pursue real estate gifts.”

But to call an institution like Harvard a charity is a stretch. As a 2015 New York Times opinion piece describes, Harvard spent more of its 37 billion dollar endowment on fees to the hedge fund managers who help oversee the university’s glut of money than it does on student aid. Harvard along with other universities — particularly Yale — received ire for its spending priorities, leaving the high-profile New Yorker writer Malcolm Gladwell to question whether any institution should have that much surplus capital at all. The same piece points out how hedge fund overseers donate tax-exempt “gifts” to Harvard and Yale and then those same institutions pay their salaries. It’s kinda like they’re gaming the system.

That said, wealthy philanthropists and the consultants who enable them are absolutely legally within their rights to receive tax exemptions for donating to “billion dollar hedge funds with schools attached,” as The Nation quipped. But such grift does cause lasting consequences. In a Jacobin expose of how charitable foundations are now able to donate directly to corporations, philanthropy scholar Linsey McGoey describes that the government lost $246 billion dollars in revenue between 2010-2014 due to the charity exemption. For perspective, the federal government spent $70 billion on education — six percent of the federal budget — in 2015, according to the National Priorities Project (where Bidwell used to sit on the board). Assuming that number remained relatively constant, the federal government — which, of course, isn’t the primary funder of public education (though that’s another story) — lost, on average, $61.5 billion per year from charitable exemptions.

All this said, it is of course very much up for debate whether or not corporations and wealthy individuals should be able to hoard wealth and give it away to their charity (or corporation) of choice in exchange for a tax break. Likewise, just as contested is whether or not private property or inherited wealth should exist at all. But before we engage those debates in earnest, we can at least correct the record of who is gaming the system.