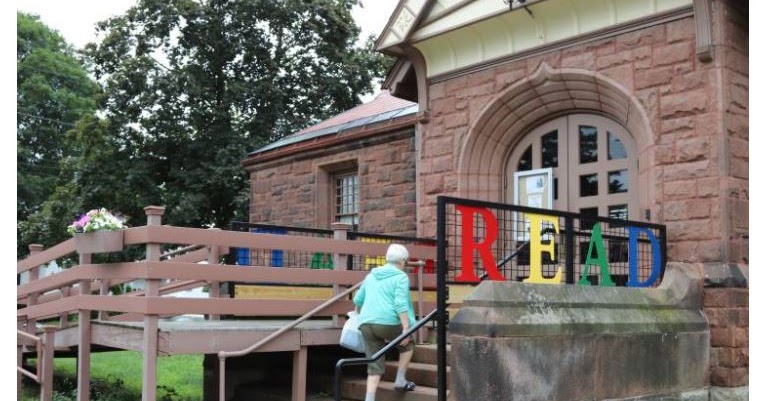 During a lively City Council meeting, the public spoke in favor of library funding

By Ben Parra and Shelby Lee

[Full Disclosure: Ben Parra works as a part-time cataloger at the Easthampton Library]

EASTHAMPTON — During a full City Council meeting last Wednesday, members of the public, as well as members of the Emily Williston Library Staff and board members, gave public comment on the urgent financial needs of the library. Chuck McCullough, the CFO at the Williston Northampton School who has been working with the board of the Emily Williston Library, provided the full Council with a dossier outlining the library’s finances. McCullough had previously provided this information to members of the finance committee during an earlier meeting this month.

As the Shoestring reported last week, in the face of a substantial budget deficit, the Easthampton Public Library will be forced to draw heavily from its endowment over the next several years, and faces insolvency. The Library Board’s proposal asks for greater investment from the city of Easthampton, which has historically funded the library below state averages. In 2021, city funds covered only 49% of the library’s operating budget. The average level of municipal funding for libraries in Massachusetts is 86.3%.

As such, the Library, like the city’s school system, must receive municipal funding to a state required minimum, which the city typically does each year. In September of 2021, the Council had to hold a vote to transfer exactly $1.00 to the Library as a budget correction, because the original approved budget miscalculated the minimum required amount by the Massachusetts Board of Library Commissioners. Multiple councilors joked about the proceeding.

This state-required funding level exists because the Libraries and resources of the Libraries are part of a state-wide interconnected network. If the Library closes and the city is no longer paying the state minimum contribution, the library becomes “decertified” within the state and all Easthampton residents become ineligible to borrow from neighboring libraries. With the Library’s endowment predicted to reach a critical point within the next five years, there is a very real urgency for the city to find funding solutions with the library.

Other members of the Library’s staff and planning members echoed McCullough’s hope for a collaborative approach. Katya Schapiro, the Library director, noted that the Library’s budgetary needs are “dire”. “We are already doing a great deal with very little, and we want to do more, and to spend this time to reevaluate the relationship of Easthampton to its public library.”

Public comment was unanimous in its support of the Library, as citizens of Easthampton spoke of the library’s importance to the community.

“a city without a library isn’t one that I want to live in,” said resident Gwynne Morrissey. “A library has books…but it’s also a social and cultural repository, a dispenser of all kinds of information, an emblem of literacy, a source of early, middle, and late-life learning, and one of the few free places you can go for a couple hours with your kids on a Saturday morning in Winter and know for sure that it will be warm and have a bathroom.”

Several residents spoke up about the current building’s accessibility issues, and how these shortcomings limit programming at the library. Resident Carolyn Cushing noted that, “[In] seeking funding from the Easthampton Cultural Council, or anything funded by the Massachusetts Cultural Council, we cannot hold programs in the library, because it is not ADA compliant…I would welcome having a building that is accessible, so it can be used for programming with state grants.”

Incoming Youth Services Coordinator Emily Prabhaker shared similar sentiments: “I am dreaming of the levels of programming we would be able to provide in a space that would be accessible to all and hospitable to bigger groups…when a child grows up with a library that is physically accessible to all, that has the space and the resources to surround them with all different kinds of members of their community, with books that reflect a rich variety of lived experience, and with programming in a space that is ample enough to connect them with their community members, the library within their own hearts and minds will also be inclusive and rich.”

Public comment was followed by remarks by Councilor Daniel Rist [Precinct-5], who is also the chair of the finance committee. “I encourage all of us to listen, but to remember that there are many departments in this government… The majority of our citizens, yes they want the schools and the library funded, but they are very concerned about our roads, our sewer and water infrastructure that’s a hundred years old” he said. “The City Council must balance all the needs of the city to prioritize one department over others only leads to acrimony and citizen despair.”

The Easthampton City Council has a history of mixed budget priorities. Rist, for example, voted to provide $89,864 for Tesla vehicles for the police department in May of 2022, and approved large supplemental appropriations of cannabis revenue (upwards of 86% of the total of FY21 cannabis revenue) to the police department at various points during 2021 and 2022. On January 19, 2022, the City Council voted unanimously to appropriate a sum of $42,500 for a skatepark design that has yet to have a determined location. The Library, as well as the Water and Sewer Department, have repeatedly made requests for budget increases to remain operational during the same years.

“A town’s public services reflect the town’s values,” said Easthampton resident Sam Virzi. “I would like to see Easthampton embody the kind of progressive and inclusive values that a well-funded public library can really be a haven for.”

Shelby Lee is a caretaker of pets and gardens, with a background in environmental science.

Ben Parra is a librarian living in Easthampton.