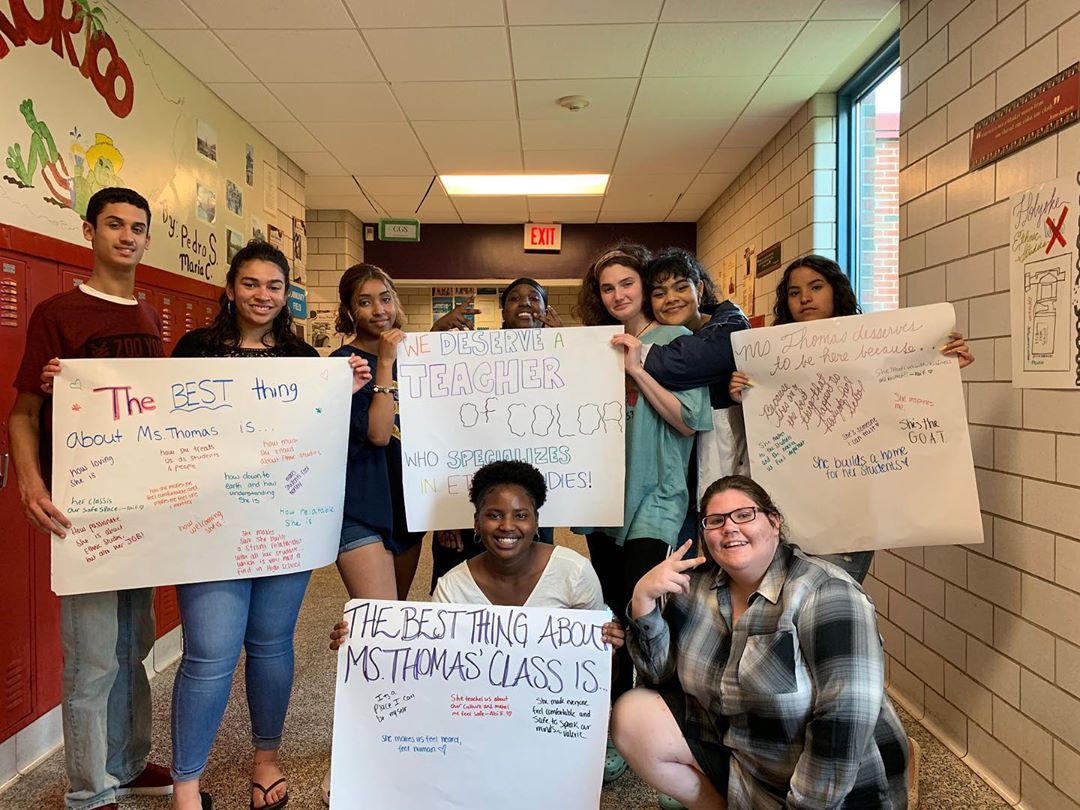 On the last day of school, June 19th, dozens of students and teachers gathered outside of Holyoke High School’s North Campus to protest the firing of Alicia Thomas, a beloved teacher in the school’s ethnic studies department. Ms. Thomas is one of only two teachers of color of the seven teachers in the department, which teaches history from a culturally relevant perspective that incorporates race, ethnicity, and people’s history.

When asked about the reason for her dismissal, Ms. Thomas pointed to an earlier disagreement with the school’s new principal, Dr. Stephen Mahoney. Though Ms. Thomas was not given a reason for her contract not being renewed, she did receive a verbal warning in January for refusing to discipline students for wearing du-rags – even though the school policy only bans “hats, bandanas, and sweatpants.” In their conversation, Ms. Thomas, who has a master’s degree in comparative education with a specialization in race and ethnic studies as well as a master’s in secondary history education and five years of teaching experience, pointed to a large body of research that shows that disciplining students for wearing culturally-specific attire harms students, especially students of color: “I’ll tell kids to take their hoods off and their hats off, but if it’s a du-rag specifically, that targets kids of color,” Ms. Thomas said. “It’s banning something that only one community uses, so obviously that one community is going to get more suspensions.”

Even though Ms. Thomas was eventually forced to make students aware of the policy not to wear du-rags, the issue stuck. It both opened the students’ eyes to the school’s discriminatory practices and identified Ms. Thomas as a “troublemaker” for the new principal.

In response to questions about Ms. Thomas and the student protests, Director of Communications for Holyoke Schools Judy Taylor told The Shoestring, “we are not able to discuss personnel issues” and that “we strive to support all our students, faculty and staff to adhere to all of our schoolwide rules and expectations and believe that we do so in as fair and equitable a manner as is possible.”

Since students learned that Ms. Thomas’ contract would not be renewed, they have been organizing to make their voices heard, using the student and community relationships built and the skills learned through their ethnic studies coursework—from organizing surveys to direct actions to meetings with Holyoke Mayor Alex Morse and Principal Mahoney. According to a survey circulated by students, “73% of students agreed that school policies target their racial or ethnic group, and 85% reported that they see a racial pattern in the ways that students are disciplined at Holyoke High.”

At the rally, students pointed to how, within Holyoke schools, students of color are disproportionately reprimanded for wearing du-rags, while white students wearing hats are less likely to be reprimanded. To protest the discriminatory policy, the students recently called for the student body to wear du-rags for a day. The event met with success – at least for now. Shortly afterwards, on June 7, the policy was suspended for the remainder of the school year.

Standing outside of Holyoke High School, bullhorn in hand, another ninth-grade student told the group why she was protesting Ms. Thomas’ dismissal: “I was born in the hood and all the way up to this very moment, I still reside in the hood. I am no less due to my native language and gender. I am to graduate high school, I am to beat the system. I am to become who I want to be, who I was born to be.” To students like this, Ms. Thomas is a leader and mentor in navigating a system that, in the words of this student, “have pushed all of my family down to the dirt.”

Through the ethnic studies program, students have learned not only that their voices matter, but also that change has only come because people before us have organized to fight for it. In the words of one eleventh-grade student, “A major thing that they teach in ethnic studies is that your voice is your most powerful weapon. We as students decided to use our voices as weapons and decided to fight back and resist against things that we feel are wrong. We’re here because they are trying to fire one of the only teachers that actually looks like us and cares about us at the same time.”

The question remains if the school administration will listen.

Celina della Croce is a coordinator at Tricontinental: Institute for Social Research as well as an organizer, activist, and advocate for social justice.