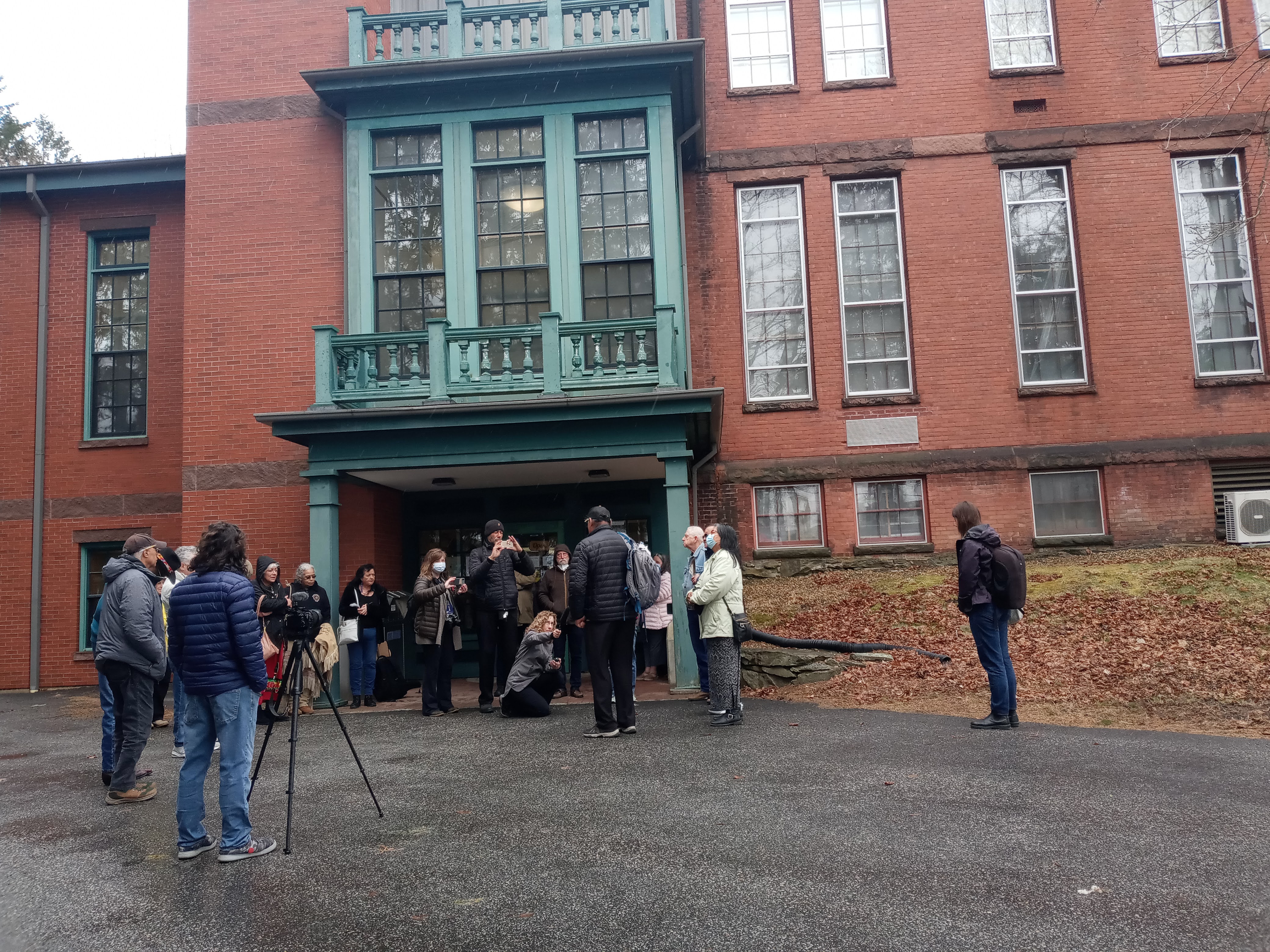 The Barre Museum’s board voted to begin the repatriation process during the visit.

In a chilling drizzle on April 6th, Chief Henry Red Cloud of Oglala Tribe and ally Jason Mackie from Westminster, Massachusetts, stood in the parking lot of the Public Library and Museum located in the Worcester County town of Barre. Chief Red Cloud and Mackie were awaiting other Lakota Elders. The party was seeking to repatriate indigenous artifacts and remains taken from the killing fields at Wounded Knee that were housed in the museum’s collection.

On December 29th, 1890, 300 Native women, children, and men were murdered by the Seventh Cavalry formerly led by U.S. Army Lt. Col George Armstrong Custer. The massacre occurred as a group of various Lakota tribal bands sought new food sources after theirs had been destroyed by the creation of reservations in the Black Hills of South Dakota. Upon meeting, the travelers performed a Ghost Dance to call upon their ancestors for protection. The manager of the reservations witnessing the ceremony misconstrued it as a war rally and a call was made for U.S. troops.

Upon the soldier’s arrival, the Natives decided to travel towards Pine Ridge, SD. Forty-five miles into a 200-mile journey, the group, led by Minneconjou Chief Big Foot, was cut off by the  Army and forced to camp at Wounded Knee Creek where 470 soldiers lay in waiting. Early the next morning the group was commanded to unarm themselves. A gunshot followed and within five minutes most of the travelers were killed. Not long after that, the bloody field was looted by the soldiers and nearby settlers.

As a small crowd of mostly White supporters from across Massachusetts began to gather outside the Barre Museum, Chief Red Cloud and Mackie shared about the earlier efforts of repatriating items, including the bonnet of Chief Red Cloud, Henry’s great-great-grandfather. “That’s where we found [the bonnet], at an auction. And it’s illegal to sell eagle feathers in the United States so they might as well return it to the Lakota people,” exclaimed Chief Red Cloud.

The Barre museum isn’t the only site where the tribe has sought to repatriate items stolen at Wounded Knee. Negotiations between the Lakota Tribe and Washington College in Chestertown, Maryland, which stored a headdress that belonged to the tribe, began in 2008. Two years ago, the college and the headdress’s private owner agreed to return the bonnet to the Lakota people.

After the settlement, Mackie, who lived closest to the headdress, drove well over a thousand miles to pick up the item and return it to Henry Red Cloud. Starting from Massachusetts to Maryland to pick up the bonnet, he then trekked west to Illinois where he met Henry Red Cloud midway to South Dakota. Red Cloud then drove the bonnet the rest of the way to its final home on the Pine Ridge Reservation.

Since 1901, the Wounded Knee Survivors Association, made of descendants like Chief Red Cloud, has discovered, identified, and repatriated cultural items—often funerary objects, items, or remains taken directly from the graves. “As they were peeling their frozen bodies off the ground, they were thieving from them,” Red Cloud told the crowd.

Whether stealing a gruesome souvenir or looking for something exotic to sell, artifacts from Wounded Knee would be found in museums and marketplaces as far away as France. Headdresses, moccasins, and even body parts have been found and repatriated.

The Wounded Knee descendants would gain support from the Native American Graves Protection and Repatriation Act (NAGPRA), which was passed in 1990, and works to “protect burial sites” and provide an outline of Indigenous people’s rights to cultural and funerary objects. Though NAGPRA and other federal laws often support the Lakota people’s claims, it’s up to small teams of allies and descendants to do much of the groundwork.

Elder Leonard Little Finger was one of the first Lakota descendants to become aware of items tucked away in the Barre Museum back in 1993. He would later ask a delegation of Lakota youth and a photographer to view the items. Fortunate enough to take pictures, those images became proof that the museum was hoarding objects. Since then, the Lakota and tribes found throughout the Black Hills have visited the town of Barre, demanding the repatriation of the items.

As the crowd began to break up to head inside, sheltering themselves in the children’s library on the first floor, Mia Fereleto, organizer and ally of Chief Red Cloud, rushed from the library towards the little group standing in the rain.

“The board has voted to return the items,” she calmly told the group.

Joyously, Red Cloud and Mackie hugged and shook hands with everyone in sight. After more than 25 years of back and forth, these items will finally be received by their rightful owners.

After sage smoke was spread over the Indigenous elders, a small group of 10 went up to the second floor to view the glass cases filled with locked away memories of significance to their people. The next steps are to go through the necessary paperwork, which could take years, and organize the elders who will perform the ceremonies of removing the items and returning them home.

Barre Museum Association board president Ann Melius says if there is anything the board can do to help the items make their way to the rightful owners, they are willing to assist. Melius also mentioned the Museum would like to replace the returned items with replicas.

Terry Gibson is an artist and activist living in Holyoke. Image courtesy of the author.