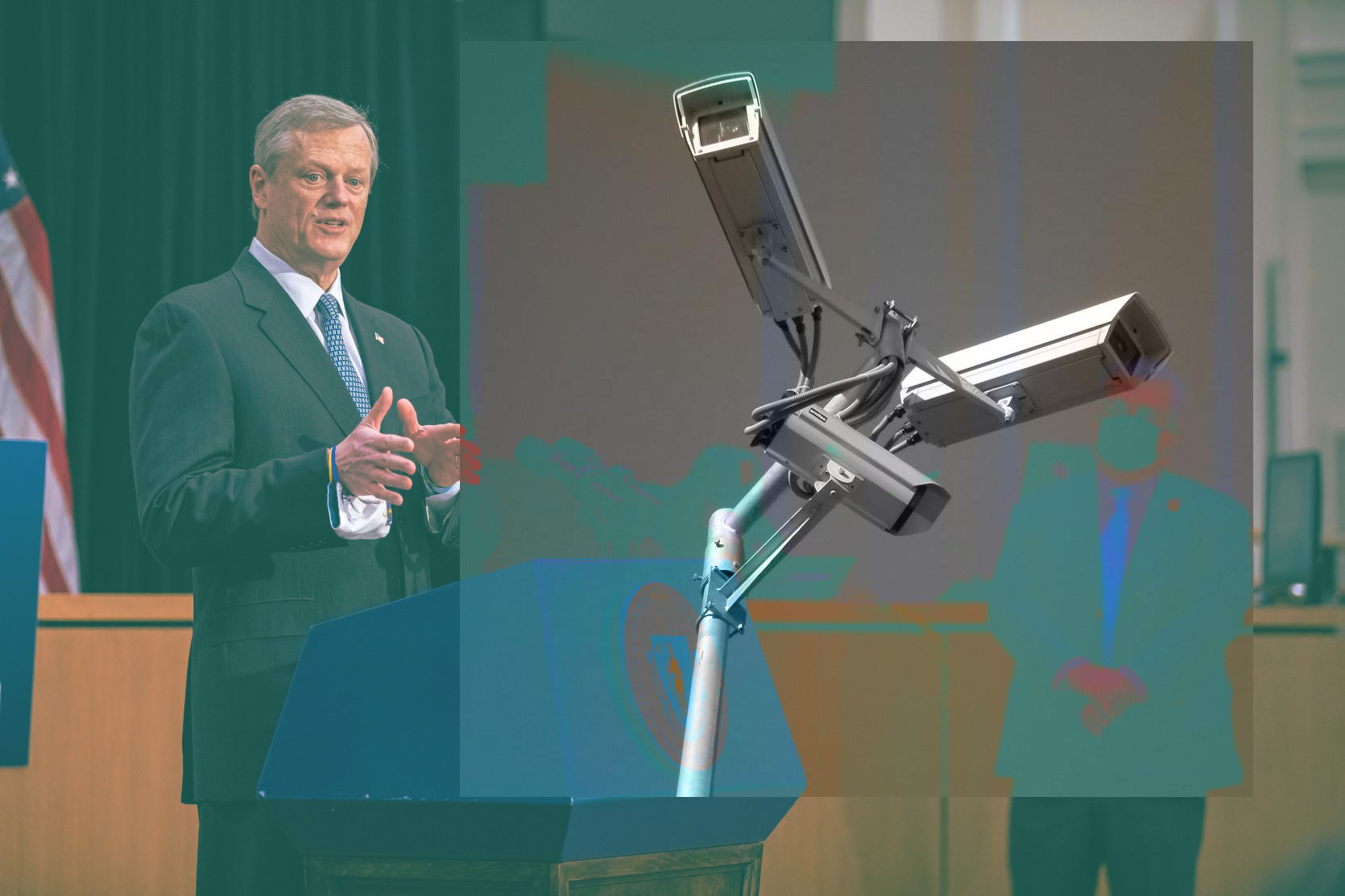 On December 31st, 2020, Massachusetts Governor Charlie Baker signed the highly anticipated Police Reform Bill into state law. The process included months of deliberation and debate, with input from community groups, activists, legislators, police unions, and an initial veto of the bill by the governor.

One part of the bill concerned facial recognition technology, a factor which led to Baker’s veto. While towns and cities like Easthampton, Northampton, Springfield, Cambridge, Brookline, Boston, and Somerville have all passed ordinances banning or restricting the use of this technology, a statewide ban of the use of facial recognition technology by the police is noticeably missing from the bill.

In early December 2020, a version of the police reform bill passed by both the State Senate and House was presented to Baker. The bill included bans on the use of chokeholds, rubber bullets, and tear gas; restrictions on the use of no-knock warrants; limits on the use of deadly force; and introduced a duty calling on officers to intervene when witnessing excessive force by another officer.

Notably, the bill proposed the creation of a civilian led commission, the Peace Officer Standards and Training Commission (POST), which would serve to standardize the certification, training and decertification of police officers. POST would be independent from the Executive Office of Public Safety which currently reports directly to Baker. The bill also proposed a limit on qualified immunity for officers who are decertified by POST. Additionally, the bill  proposed moving oversight of the Municipal Police Training Committee—essentially the training process for police officers—from the Executive Office of Public Safety to the POST commission.

Baker returned the bill in early December citing issues with both the facial recognition technology (FRT) ban and the shift of oversight of the current Municipal Police Training Commission to the newly created POST commission. While he agreed to an independent commission and its jurisdiction to certify and decertify officers and oversee misconduct investigations, he objected to the oversight of the police training process. Baker wrote in a letter to the state legislature, “I do not accept the premise that civilians know best how to train police.”

Ultimately, the bill that was signed into Massachusetts law on December 31st, 2020, includes much of what was included in the earlier versions. However, due to the Governor’s veto, the Municipal Police Training Commission will remain under the jurisdiction of the Executive Office of Public Safety. And, while the moratorium on FRT is absent in the bill, the bill does include limits and specifications as to how police departments can request access to the technology: “Any law enforcement agency performing or requesting a facial recognition search using facial recognition technology shall only do so through a written request submitted to the Registrar of Motor Vehicles, the Department of State Police or the Federal Bureau of Investigation.”

Police unions have consistently pushed back against this bill arguing that it will produce increased levels of bureaucracy, costly commissions, and the appointment of people with no experience of “the dangers officers face every day.” Police officers and their unions generally support the use of  FRT, claiming that it aids their investigations and is necessary to collect evidence.

Contention over bias and racism inherent in FRT has entered the mainstream dialogue about surveillance, with scholars, activists, lawyers, and even the Boston Celtics expressing concern. The Editorial Board of the Washington Post, on the same day that Governor Baker ultimately signed the police bill, wrote a collective Opinion piece on the dangers of unregulated FRT. The piece cites wrongful arrests of black men due to the failures of the unregulated technology, such as the arrest of Nijeer Parks in 2019.

Over the past two years, various townships and cities in Massachusetts have banned the use of FRT through local city ordinances passed by respective city councils. Cambridge, Somerville, Brookline, Northampton, Easthampton, and Springfield have all approved local city ordinances banning its use by city departments. The most recent being Easthampton, where The Resistance Center and local activists joined the ACLU’s Press Pause Campaign to support and pressure City Council members to vote for an ordinance which would ban police use of FRT. The ordinance passed with unanimous support from the City Council, as well as Easthampton’s mayor and police chief.

Kade Crockford of the ACLU of Massachusetts spoke with The Shoestring about the relationship between the state law and local ordinances. The ordinances and bans across local municipalities will stay in effect, but Crockford notes that, “The only difference is that the state law authorizes police to, subject to a court order, ask the Registry of Motor Vehicles for the Massachusetts State Police to perform facial recognition searches using their technologies in criminal investigations.” Adding that, “Yes, the state law impacts the municipal bans in a narrow sense, but the vast majority of the municipal laws impact remain in effect.”

Many scholars, data scientists, and technology ethicists have criticized FRT on the grounds that the technology itself is flawed, performing better on lighter skinned faces and terribly if not at all on darker skinned faces; and that the use of FRT is an invasion of privacy and an infringement on rights. Gender Shades, an 2018 evaluation project and research paper conducted by Joy Buolamwini of the MIT Media Lab and Timnit Gebru of Microsoft Research, found that of the three companies (IBM, Microsoft, and Face++) used in the study due to their use of artificial intelligence for computer vision, all three companies’ software performed better on male than female faces, and all three performed better on lighter skin than darker skin. According to their study, “Error analysis reveals 93.6% of faces misgendered by Microsoft were those of darker subjects,” and that “95.9% of the faces misgendered by Face++ were those of female subjects.”

One notable failure of the technology was after the Boston Marathon Bombings in 2013, when facial recognition software failed to identify the two men responsible for the bombings, despite the fact that both of their images were already in the official databases, and one of the men’s photographs was in the FBI’s own database as a result of a previous charge. In the case of identifying the Boston Marathon Bombers, it was not facial surveillance technology, but interviewing survivors and bystanders of the attacks that led to arrests. After the 9/11 attacks, the FBI poured billions of dollars into biometric surveillance technology, including facial recognition software. Local police departments now have pared down versions of these databases, such as CopLink which the Shoestring has previously reported on.

Following the January 6th riots in Washington D.C., where an armed group of protestors broke into the U.S. Capitol building with the support of Capitol police, there have been calls for using more surveillance technology for the purpose of finding and presumably arresting those responsible for the attack. Baker made this same argument at a recent press conference. But as Albert Fox Cahn, Executive Director of the Surveillance Technology Oversight Project (S.T.O.P.) in New York City, notes, “If we give into the narrative that we need new invasive measures to solve this case, we will only further accelerate the growth of the national security state that failed to keep us secure from white extremists.“

Crockford pointed to a study done by the ACLUM in 2019 that showed that 91% of Massachusetts voters think the Commonwealth should regulate the government’s use of facial surveillance technology and that 79% of voters support a moratorium on the technology altogether. When asked whether the lack of a statewide ban on FRT would present challenges to passing local ordinances, Crockford responded that this is a common sense issue that Massachusetts residents support regulation on, and that if anything this lack of a statewide ban provides even more momentum for passing local ordinances. “We are not going to give up until we have protected every person in Massachusetts from the scourge of this type of surveillance.”

Kate Nadel is a grad student living in western Mass, who also did the art for the piece.