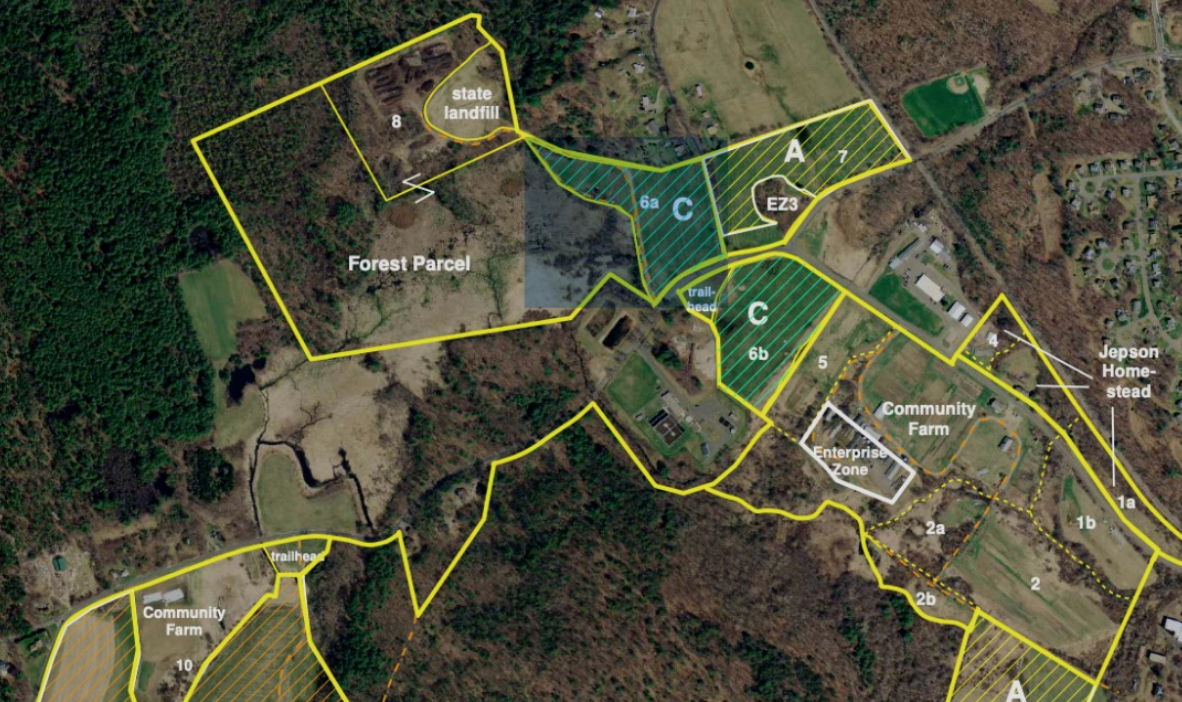 The rematriation of Lampson Brook Farm would significantly increase the tribe’s access to their ancestral lands.

Long before European settlers arrived to establish colonies that would eventually become the Commonwealth of Massachusetts, Nipmuc territory encompassed hundreds of thousands of acres spanning the majority of state and parts of Connecticut and Rhode Island.

Now, the tribe controls just a few acres across the entire state.

For more than a year, Nipmuc leaders have advocated for Massachusetts to give back land that once belonged to their ancestors. With growing public support and an expiring lease on more than 400 acres of state property, the effort could lead to the first such return of state-owned land to an Indigenious group in state history.

Alongside a quiet road in Belchertown lies Lampson Brook Farm, an idyllic piece of farmland tucked amongst rolling hills. A winding dirt driveway with accompanying crop fields, several barns, and a trio of towering silos mark the site of a nonprofit farming collective that has been home to aspiring farmers, hoping to hone their skills, for more than four decades.

But in 2023, the New England Small Farm Institute’s (NESFI) lease expires, leaving the state—which granted the organization a long-term lease on the land—with a choice: sell or transfer the land to another owner.

“If the state has land they want to give away, then they really should give it back to the people who were here originally—the ones they took it from,” said Cheryll Toney Holley, chief of the Hassanamisco Nipmuc Band, in an interview with The Shoestring.

A bill passed in January 2021 outlines the future of Lampson Brook Farm. The law states that a board of directors would oversee the land’s transfer of ownership, making sure that conservation efforts are followed and that the “many public values” that make the property “a unique natural and cultural resource” are adhered to, according to the state’s website. The land would be split into five parcels depending on their intended purposes, such as farming, recreation, protection, and sold off.

Nowhere in the bill were the Nipmuc people mentioned. Ever since the legislation was proposed, however, advocates have been outspoken about changing that.

“Return, or rematriation, of stolen Indigenous land is a critical step in healing from our violent and shameful past here in the commonwealth,” wrote Kelly Silliman and Molly Merrett, organizers with the local chapter of Showing Up for Racial Justice (SURJ), in a letter to the Daily Hampshire Gazette.

Narratives about Indigenous erasure are especially dominant in the Northeast, according to Kiara Vigil, an associate professor of American Studies at Amherst College and author of a book on Indigenous sovereignty and citizenship.

“This particular instance, I think, is an opportunity for a re-stitching of relations between the town residents and government of Belchertown with the Nipmuc, who have both historically and currently used, known, and occupied the lands that have been under state ownership,” Vigil said in a statement to The Shoestring.

Returning land to the Nipmuc would enable citizens to “reckon with those narratives” and better understand the importance of Indigenous sovereignty, she said.

Recently, Nipmuc members have been in talks with the board of directors and community members, who Holley said have been supportive of the group’s efforts.

“Rematraiting land to the Hassanamisco Nipmuc Band is no doubt a worthy effort and I am looking forward to seeing [the board’s] process unfold on the disposition of the land parcels,” said State Sen. Eric Lesser, who worked to pass the aforementioned bill, in a statement to The Shoestring.

From Holley’s perspective, the solution would be simple: convince officials to write an amendment to the law, or rewrite it entirely, giving the land to the tribe at no cost.

“Land back is a big deal right now across the country, and it would be the first land back deal in Massachusetts” with state-owned property, she said, referring to the growing national movement for states to return land to Indigenous people. Three years ago, the Nipmuc purchased about 18 acres in Athol from a private owner.

“It would definitely set a precedent here,” Holley said.

With few acres under Nipmuc control across the state, retrieving Lampson Brook Farm—which boasts an expansive forest, streams, wetlands and farmland—would be monumental for the group, whose ancestors lived throughout the central part of the state before colonizers arrived.

If given the land, Nipmuc leaders plan on creating an “agrihood,” a type of planned community that centers agriculture around a residential neighborhood.

A handful of low-income families or single parents would live on the land, whether they’re Nipmuc or not, and grow produce to eat or sell, Holley said. One of the barns would be converted into a commercial kitchen, and the forest parcel would remain preserved and used for indigienous education activities and trails. Money collected from farming and lease payments would be used to fund the agrihood and other parts of the project.

Though there’s been an outpouring of support from the public, Massachusetts doesn’t have the most promising history of following Nipmuc requests.

As settlers encroached on Nipmuc land throughout the 17th and 18th centuries, they forcibly removed and murdered Indigenous people who refused to leave and sold others into slavery. To survive, many Nipmuc people moved out of reservations and adapted to English customs. It wasn’t until 1976 that the commonwealth officially recognized the Hassanamisco Band of Nipmucs.

Around the same time, the tribe’s leadership petitioned the governor and legislature to create “New Town,” which would have been a 500-acre plot designated for the tribe in Grafton. The Hassanamisco Reservation, the tribe’s ancestral home, is located in that town today, encompassing less than four acres.

Rather than approve New Town, state officials had another idea: give the land to Tufts University to build its Cummings School of Veterinary Medicine.

“We haven’t been able to get the land back from the state,” Holley said. “So, when Lampson Brook became available we were surprised and pleased, and now we’re hopeful the state will do the right thing and give it back to us.”

Native nations have made progress in other parts of the country with land back efforts in recent years. In 2020, the Chippewa National Forest in Minnesota was directed to transfer 11,760 acres of forest service land to the Department of the Interior, which will hold the land in a trust for the Leech Lake Band of Ojibwe. The Esselen tribe in California also got land back that year, purchasing about two square miles of their land for just under $4.5 million. In 2021, the Passamaquoddy tribe in Maine purchased Pine Island for $355,000, a piece of land they had inhabited for at least 10,000 years.

Because of the Nipmuc’s long history with the land, going back thousands of years, advocates say returning the land to the tribe would be a crucial step toward acknowledging a brutal past.

“This history and relationship needs to be recognized and honored,” reads the SURJ sample letter the group urged advocates to email to the board of directors, which explains why the land should be given back to the Nipmuc.

In recent weeks, Western Mass SURJ has helped bring awareness to the issue. The group alerted more than a thousand people on their email list, garnered hundreds of likes on an Instagram post and encouraged fellow advocates to email the sample letter to the board. One person on the board, Merrett told The Shoestring, received more than 150 letters in a two-week period.

The advocacy group has also set up a reparations campaign to raise money for the Nipmuc, with 100 percent of funds going toward the group.