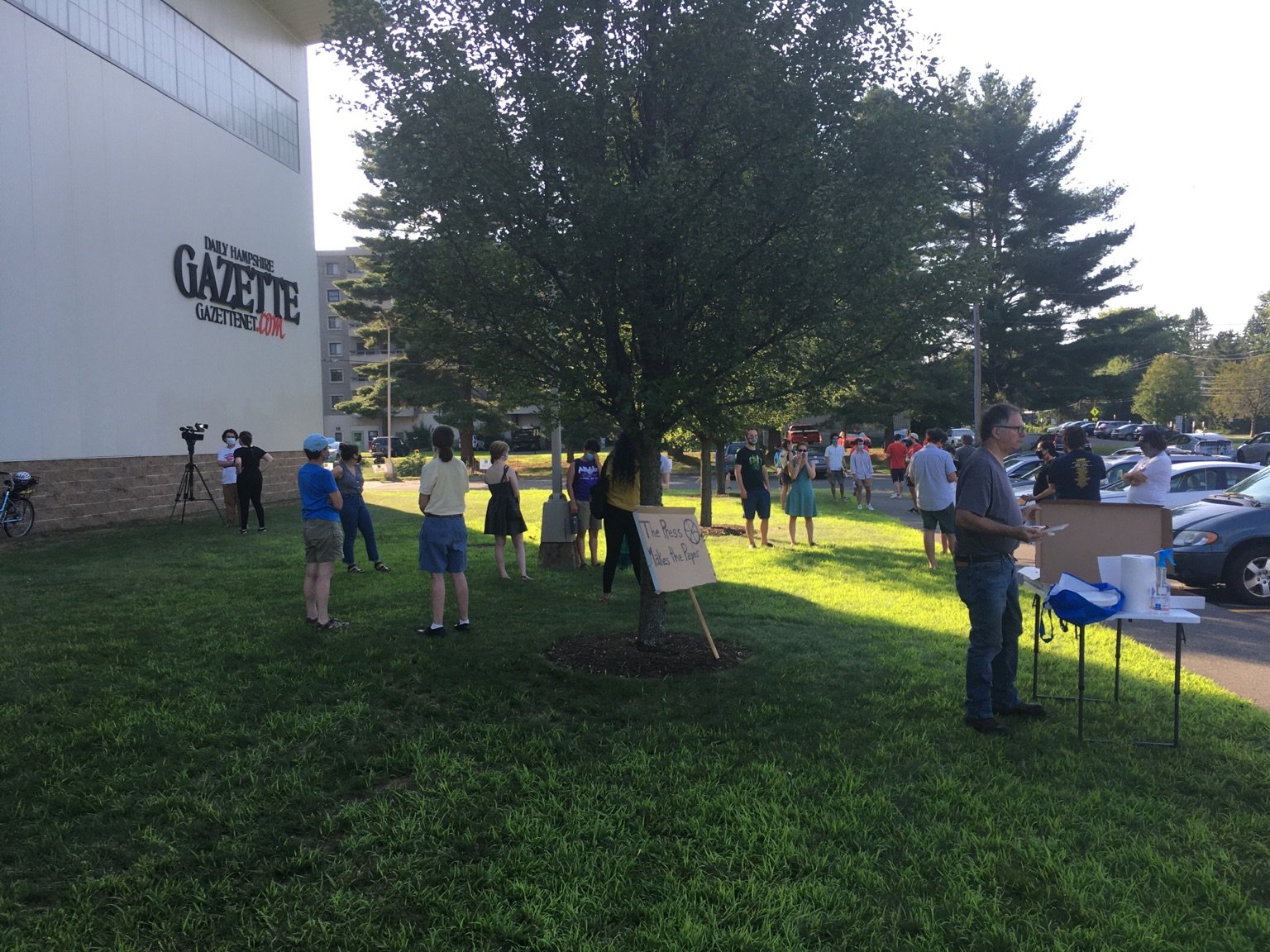 Several reporters and photographers at the Daily Hampshire Gazette demanded that their names be taken off articles and photos until the newspaper’s management agree to contract negotiations with the Pioneer Valley NewsGuild, the union representing the Gazette’s workers.

The byline strike is the latest – and most drastic – measure taken by the union in a series of tactics aimed at pressuring Newspapers of New England, the Gazette’s parent company, to agree to a set of contract requests. NewsGuild leaders announced the new demand in a statement to the press and supporters Tuesday morning.

“For years, we have worked harder and harder to put out a newspaper as NNE slashes staffing and expects us to pick up the slack,” the statement wrote. “And we have risen to that task, despite a global pandemic, low pay and increasing attacks on the free press.”

But it seems unlikely that the union’s demand will be met. Shawn Palmer, the Gazette’s publisher, said the newspaper has an “obligation to our readers” to disclose who wrote an article or took a photo, according to New England Public Media. For the sake of transparency, “we will continue to publish reporter and photographer names where appropriate.”

Though the owners claim they want to keep bylines for ethical purposes, Bera Dunau, a Gazette reporter and NewsGuild unit council chair, told The Shoestring “it would be good to provide an ethically fair contract to the people who prepare our newspaper.”

Contract negotiations between the Gazette’s union, which represents non-managerial workers, and NNE have been ongoing for more than two years. Requests include job security, protections against the outsourcing of jobs and wage increases to cover rising living costs. NNE proposed granting workers a 1.75 percent pay raise in the next three years, which does not cover the costs associated with inflation, union leaders wrote.

“With inflation, that amounts to a pay cut for our hard-working members, most of whom are paid less than $40,000 a year,” the statement said.

The NewsGuild and NNE plan on negotiating again on November 18th. If there are few signs of progress, “then we will look at other options on the table,” aside from a byline strike, Dunau said.

Gazette workers have used numerous tactics to garner attention and support for their cause. In late October, members announced that they would be going “work to rule,” meaning that they would not perform duties outside of those explicitly mentioned in their job descriptions.

For at least three years, NNE has been outsourcing parts of the Gazette’s production to Gannett, the largest publisher of daily newspapers in the country. In June 2018, four workers in the graphics and layout departments lost their jobs and their duties were taken over by the conglomerate. Another 29 workers were laid off in July 2020 when the newspaper’s printing press was shuttered, with print operations being handed over to Gannett. Twenty four of those jobs were unionized with the NewsGuild.

Last summer, union members and supporters could be seen outside the newspaper building — which was put up for sale after being occupied by the Gazette for more than four decades — showing solidarity with laid off workers or mourning the closure of the printing press.

The newspaper’s leadership and editorial staff have undergone drastic changes as well. Last year, the editor-in-chief position, which oversaw editorial operations and had been held by Brooke Hauser since 2018, was eliminated and combined into a regional editor position. According to Dunau, there are 20 members of the union, including most of the reporters and other non-editorial workers. Overall, eight writers and a photographer compose the editorial staff.

Though the editorial staff hasn’t returned to the size it was prior to the pandemic – caused by numerous layoffs – Dunau said that the newspaper’s owners have made an honest effort to rehire those laid off or seek out new workers.

At newspapers across the country, unions have sprung up to combat low pay and job insecurity among other industry-wide issues, sometimes taking drastic measures to fight for fair contracts.

In November 2018, the Pittsburgh Post-Gazette’s union initiated a byline strike that lasted nearly a month and resulted in more than 1,400 bylines withheld, leading to a flurry of media coverage that brought the workers’ demands to a larger audience. The Boston Globe’s union reached a tentative collective-bargaining agreement with its owners after two years of negotiations, during which members held walkouts and garnered support from prominent celebrities and politicians.

“As a unified group, we are ready to take further action to stand up to NNE’s bullying,” NewsGuild leaders wrote. “We work every day to hold the powerful accountable, and that work doesn’t stop when we walk out of the office door.”

Matt Berg is a journalism student at UMass Amherst, his work has appeared in The New York Times, The Boston Globe, The Daily Beast, MassLive, and other publications. Photo by Mike Jackson.