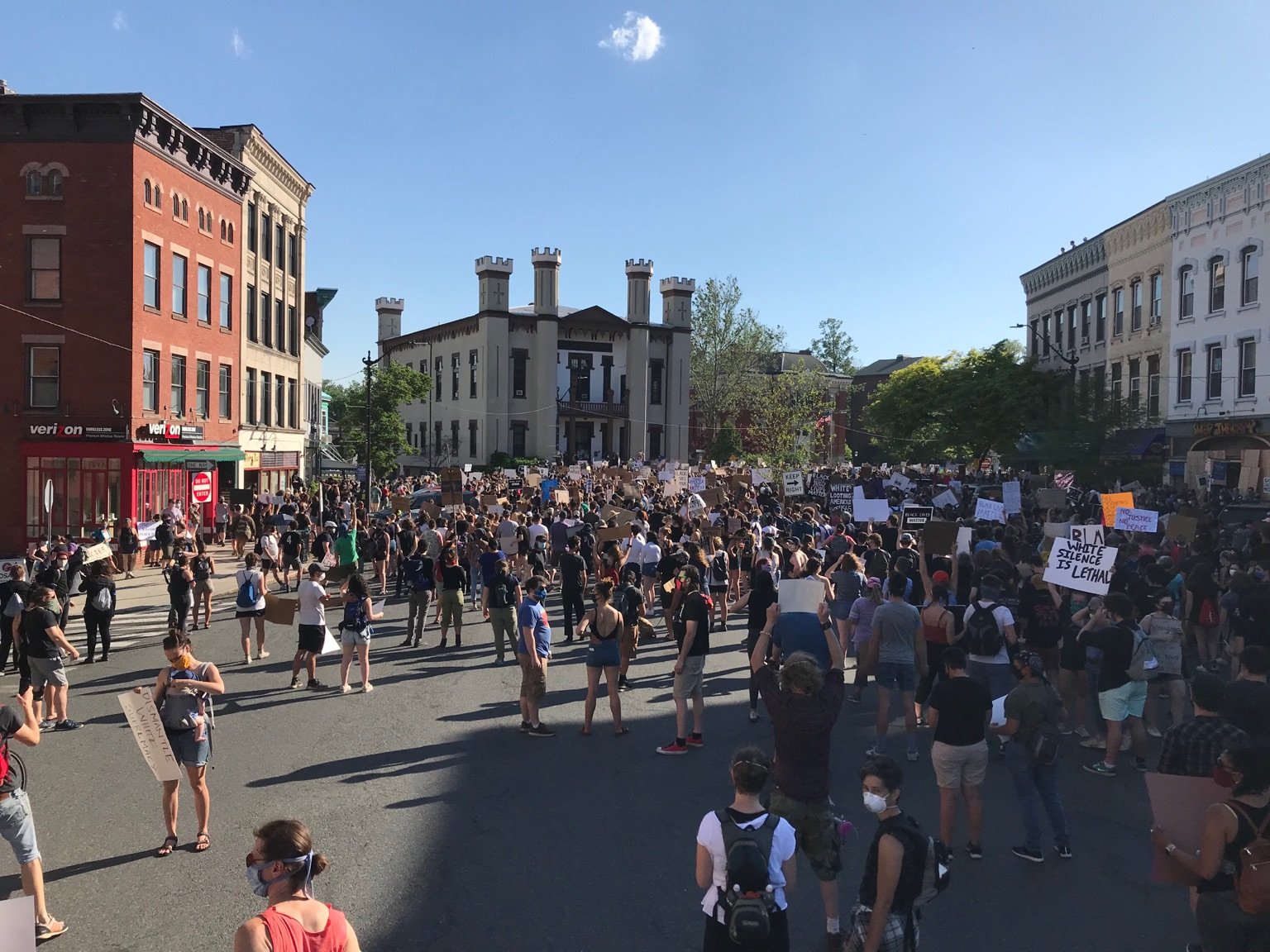 Over the course of the past week Northampton has seen its largest anti-police brutality protests in recent history, perhaps ever, where crowds demanded an end to white supremacy and police violence. On Monday, June 1st, some one thousand protestors marched to the police station demanding justice in the wake of George Floyd’s senselessly cruel murder in Minneapolis that sparked global outrage. During the protest, Northampton Captain Robert Powers told the crowd “one bad hamburger at McDonalds does not make McDonald’s bad.” During the same protest, the police pepper sprayed two teenagers.

On Wednesday June 3rd, Northampton broke attendance records when more than 550 people showed up to a city budget hearing on Zoom demanding the Council not approve a $194,000 budget increase to the police department that would support additional hybrid cruisers (the NPD already has at least two), raises, and trainings. The following night, when the Council was supposed to vote on the budget — and almost did just before 2 a.m. — they postponed their vote. More than 400 people were on that call.

On Saturday June 6th an even larger crowd than Monday marched downtown. Police from the Massachusetts State Police, Hadley Police, Easthampton Police and Amherst Police were called in for backup to create a severely menacing law enforcement presence. They were armed with guns, tasers, chemical agents, surveillance equipment, an armored vehicle, the ability to distribute tickets, and dogs. In other words, rather than ceding the demands of those on the Zoom calls by cutting the police budget, the massive (and likely very expensive) show of police force made the protestors’ point for them: The only way to reduce racist paramilitary violence in Northampton is to reduce the power and size of the police. The way to cut our carbon footprint is get rid of the tanks, jails, and hybrid police cruisers, and invest in public transportation, green housing, good green jobs, and education for all.

Because the Council has chosen to postpone the vote, that means that the community — through public pressure — can demand even larger cuts to the police budget than the aforementioned $194,000. For his part, Mayor Narkewicz indicated that he and Chief Kasper would be unwilling to help the Council procedurally with a revised budget that would reallocate funds from policing to human services. While several councilors expressed worry about not having an alternative in place, 7 hours of public testimony was crystal clear: city residents want to defund the police today even if it takes time to establish new non-violent services.

Although The Shoestring is a journalism collective and our area of expertise is not in prescribing public policy, we have reported on the size and scope of the police budget since we started in 2017. Somehow it always gets bigger, and never gets cut, even during a pandemic while crime is at an all-time low.

Organizers of the protest are demanding the following:

-As we work to abolish police, we demand that the city of Northampton take immediate action:

-Create a community oversight board with LEGAL power

-No police based mental health or addiction services. End section 35

-Moratorium on any ICE collaborations

-Stop using COP-LINK, a database that shares information with immigration

-No “green” policing. No solar or hybrid police cars

The task of the movement going forward is to both pressure the government and protest non-violently until its demands are met. It won’t happen overnight, but with sustained pressure another world is possible.

All McDonald’s Hamburgers Are Bad,

An earlier version of this article incorrectly stated that the National Guard was present at the June 6th protest in Northampton.