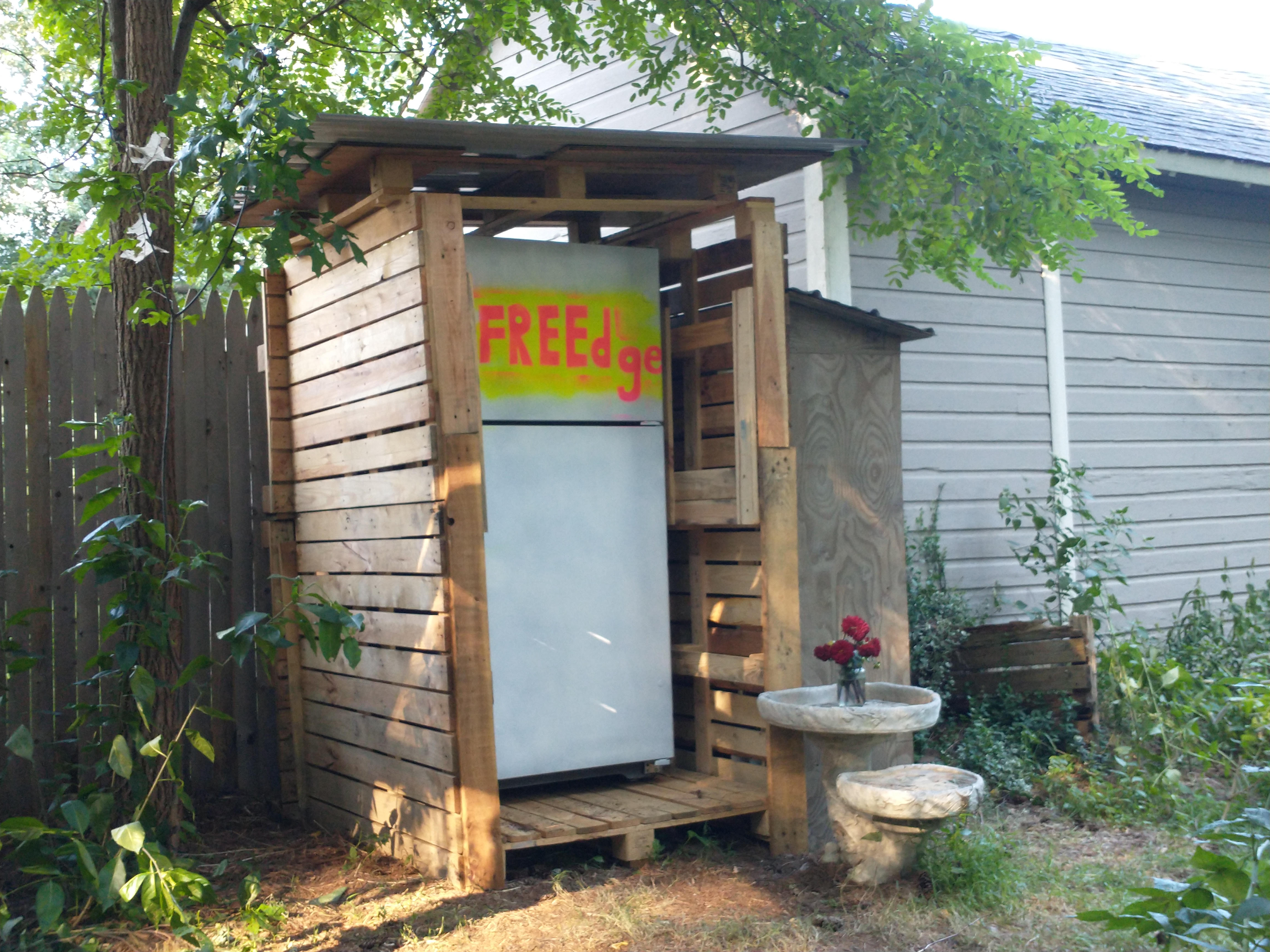 The new community refrigerator is now open for donations and pick-ups along the Northampton Bikeway.

Last week saw the grand opening of the FREEdge in Florence, a shared refrigerator installed by community members in collaboration with local nonprofit Build Repair Grow. The FREEdge will operate under the give-take-share model: neighbors are encouraged to take what they need from the fridge and drop off extra produce, shelf-stable items, and unopened commercially prepared foods.

“We have so much access to food in the Northampton Community. I take a lot of pride in the fact that, for the most part, if somebody wants food, it’s available,” said Aimee Francaes, co-owner of local restaurant Belly of the Beast and FREEdge co-coordinator. “But what FREEdge brings to the table that we don’t have yet is 24-hour access and some anonymity to that. So people who might be finding themselves on the verge of being food insecure or something to that extent, if they happen to see this on the bike path passing by, it’s something that they can access on their own time, you know, perhaps with a little more privacy.” Francaes said the FREEdge will also have a guide to other locally available resources like Manna Kitchen, Abundance Farm, and Northampton Survival Center, so it can work as “another great building block to making sure that our community is well cared for.”

The FREEdge is stationed on the Northampton Bikeway, just off of Straw Ave in Florence. The location is already a sort of community hub—adjacent to the fridge is a bench, a working phone, and a picnic table where people leave unwanted household items for other people to pick up. It will be fully functional year-round, rain or snow, thanks to the platform and shelter built by student volunteers with Build Repair Grow, a nonprofit that teaches young people practical skills like cooking, sewing, carpentry and bike repair to build self sufficiency and resiliency.

“The kids were great,” said Casey, a Build Repair Grow volunteer that supervised the FREEdge shed construction. “They were actually probably more advanced than we were anticipating.”

“This is one of our most public workshops so far, and we’re just really proud that Build Repair Grow can be such a part of such an important community fixture here,” added Logan McFadden, Build Repair Grow founder and director.

Northampton Mayoral candidate Shanna Fishel explained that they and Aimee Francaes were brought together in 2019 after each having ideas independently about installing a community fridge in Northampton. “It took us a while to secure property and to figure out liability,” Fishel said. “It was a long process, it was really slow. But it’s just amazing to have this idea and then to see it happen.”

The FREEdge is legal thanks to Good Samaritan laws that cover liability concerns for this sort of mutual aid. The Bill Emerson Good Samaritan Food Donation Act states that people or gleaners donating food or nonprofits distributing it “shall not be subject to civil or criminal liability arising from the nature, age, packaging, or condition of apparently wholesome food” that is donated “in good faith.” Fishel and Francaes partnered with the national nonprofit FREEdge team, Left Lover, inc., who will cover the FREEdge under their liability insurance under the condition that the local community acts as a host by cleaning, stocking, and maintaining that local FREEdge.

While right on the bike path, the FREEdge is technically on private property, which simplified the logistics of the project. “It’s much easier, bureaucratically, to set something like this up on private properties, because you don’t have to have the same type of regulation that you do on public property,” Aimee Francaes said. “We’re hoping that by showing that this can be done well and by following all the guidelines, [we can] have some traction for when we want to put one in downtown Northampton, or somewhere that’s on public property. It’ll be something that people are already familiar with and will really get behind.”

“I think that it’s just wonderful to be part of a mutual aid project,” Fishel said. They described the give-take-share model as an opportunity to share among people that levels the playing field. “It’s really a neighbor to neighbor opportunity. It is mutual aid, because it’s a community effort without any government support, and comes from an initiative from the community. But I really hope that it brings different kinds of discussion into the idea of food distribution and food waste.”