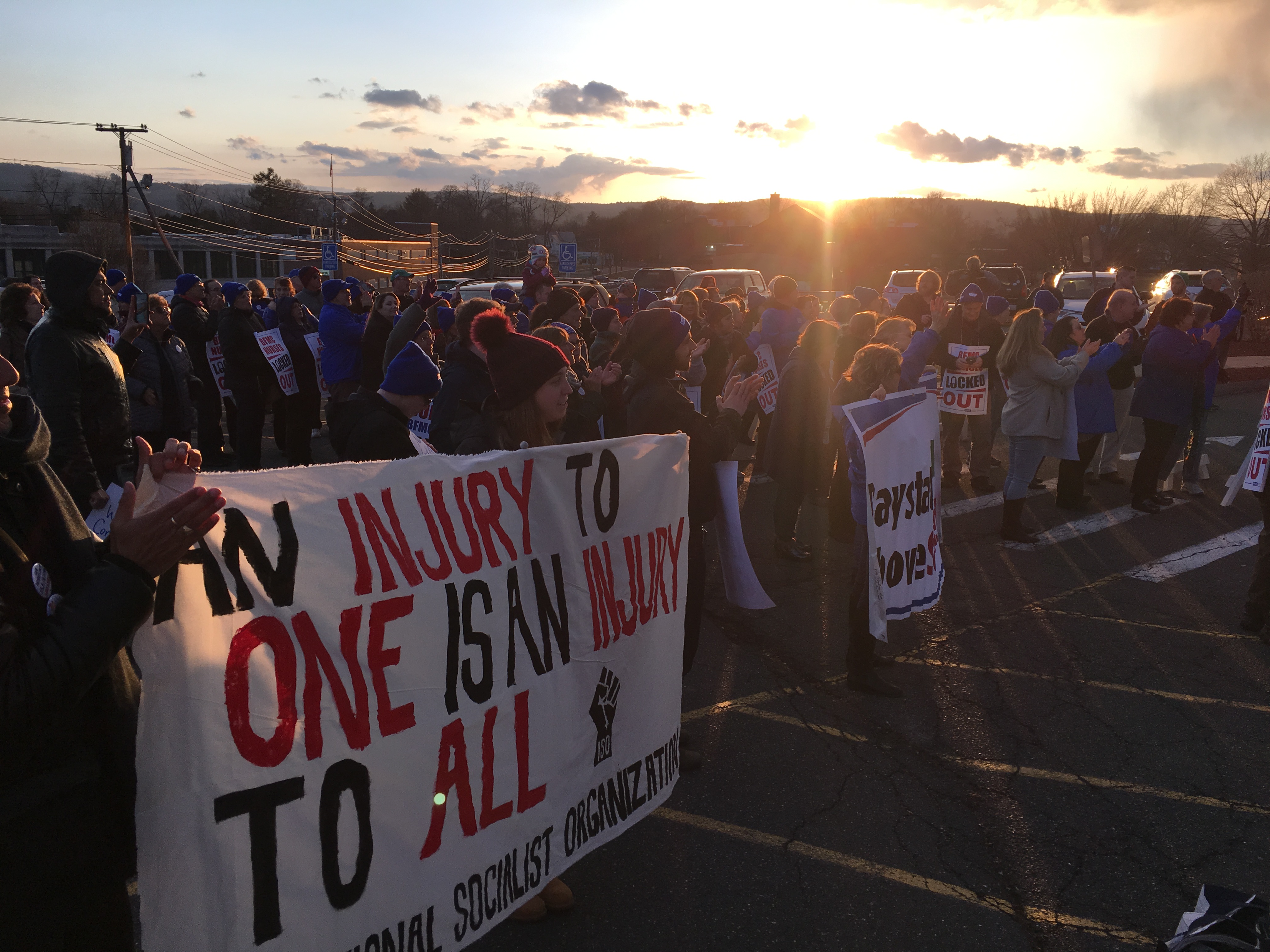 Baystate management paid the police to manage the strike

Last year, before the Greenfield nurses went on strike, the administration threatened to arrest the Junior and Senior chairs of the union bargaining committee for being on the same floor as their union members, causing quite the controversy. They were escorted out by the Greenfield Police. Baystate Franklin Medical Center in Greenfield (BFMC) had hired its own on-site private security in addition to their regular security guards. But apparently that wasn’t enough: they also hired Greenfield’s Police Department to be at the hospital during the lockout and strike. This year, nurses went on strike again fighting the same grievance (understaffing), and the GPD was back too—to physically block one nurse from a legally sanctioned activity. Through a Freedom of Information Act Request, The Shoestring was able to obtain communication and documentation of the agreement between the hospital and the police. All of this begs the question of what role the police play in Greenfield, and beyond. Do they serve the public or the bosses and shareholders?

Tuesday, April 10th, started as a typical New England early spring day — sun shining amid some light hail. The nurses of the Massachusetts Nurses Association (MNA) at BFMC were preparing for a rally that would take place directly before the hospital management locked out the unionized nurses and hired temporary workers (colloquially known as scabs) for the length of the strike plus two days.

The energy was high outside of the hospital on the evening of the 10th. Nurses and community members had gathered to support the nurses’ demand for safe staffing levels in the hospital. The nurses rallied their union members, family members, and community to watch the nurses who were finishing their shift be escorted out of the back entrance of the hospital at 7pm as the lockout began. At 6pm, nurses and their supporters gathered along Beacon street in front of the main entrance, holding signs that said “An Injury to one is an injury to all,” “If the nurses are out here something is wrong,” and “Baystate Nurses LOCKED OUT.”

What is different about using public police forces during this particular labor dispute is that it is routine and pre-emptive.

Donna Stern and Jillian Cyz, Senior and Junior chair, respectively, of the bargaining unit for the BFMC chapter of the MNA prepared to go into the hospital to see the nurses finish their shift, something that union representatives are legally allowed to do at any point before the lockout began. Upon entering the front entrance of the hospital, a hospital official stopped Stern and told her she could not enter the building. Stern pressed on, stating that it was within her right as a union representative to see that all nurses on the floor had the support they needed as their removal from the hospital was approaching. Stern stated, “I’m walking in now,” and an officer, in response, said, “Close ranks, lock it up,” before two of the officers put their hands on Stern pushing her away from the entrance. The police then locked arms preventing Stern or Cyz from going inside. The incident was recorded by someone on the scene:

Stern had anticipated this scenario, since there was a similar confrontation last year when the nurses were locked out. Stern recounted:

“We [Stern, Suzanne Love, and Rudy Renaud, all registered nurses], were already in there [the hospital] earlier but the administration threatened to arrest us if we didn’t leave… Again, before the lockout began. Then the night the lockout ended, they let Jillian and myself in… separated us from the nurses and threatened to have us arrested if we didn’t leave and we were escorted out by the Greenfield Police Department. Baystate giving all the orders.”

After filing a Freedom of Information Act request of the Greenfield PD, The Shoestring was able to obtain two documents describing communication between Baystate employees and the Greenfield Police Department. The first is an email correspondence between Kenneth Rigney, Director of Security for Baystate Franklin Medical Center, and Patrol Lieutenant Joseph Burge. The first email from Rigney is on March 27. Rigney states casually, “Strike notice was served” and tells Burge what police presence (dates, times, and locations) they need. This first email from Baystate to the police comes one day after the union notified Baystate of their intention to strike, making it is clear that Baystate had no intention of further negotiations with the MNA to avoid the strike or come back to bargaining. Burge’s response is equally routine: “Got it thanks for the lead time.” There is no questioning in these emails whether the police are actually needed for any public safety issue. Burge then forwards the email to Deputy Chief Mark Williams.

The second document is a report of which police officers were on duty during the lockout and strike and what the contract price was to Baystate; i.e. $49/hour and $36 to have a police car parked in the BFMC parking lot. I spoke to many people on the ground on Tuesday, April 10th.  They reported seeing significant discrepancies between the police presence during the lockout and what is reported here. Baystate was charged for two officers at the main entrance from 3:00-11:00, two officers at the ambulance entrance from 3:00-11:00, and two more officers there from 11:00pm-7:00am of April 10-11.

Someone on the scene supporting the nurses said, “On Tuesday, from about 6:30 on, I witnessed four police officers inside the ambulance entrance. These were the four officers who stopped and assaulted Donna Stern as seen in the video. They were likely acting at the behest and direction of Baystate security and management. There were an additional five police officers, including Lt. Burge, their commanding officer, and two cruisers outside, in the adjoining parking lot. Since Baystate is not being charged  to pay for these five officers and the police cruiser, the taxpayers of Greenfield are footing the bill. Baystate will not be one of those taxpayers due to their “non-profit” status.”

When asked about the role of police officers on the strike line, many nurses responded that they are “just doing their job.” One nurse stated that “the police are really on our side.” This sentiment is not rare, particularly among nurses. One radicalizing force amongst the nurses, however, has been the video and repeated actions of the officers manhandling Donna Stern, and essentially bullying and preventing her from doing her job as a representative of members of the union. Stern’s accounts of her experiences with the police amid strike organizing has brought up important conversations between nurses about what role the police play in all this.

Public police forces are frequently hired by private companies to do work such as guarding construction sites, tree removal sites on roads, and other public safety scenarios. Cops are there to prevent people from falling into construction holes, or to aid in traffic around a tree removal truck, as well as preventing theft of equipment. Just recently, pipeline manufacturer Kinder Morgan paid the police hundreds of thousands of dollars to guard their projects from protestors. What is different about using public police forces during this particular labor dispute is that it is routine and pre-emptive. The police were not called in to quell a riot or even a disturbance. In this case, they are acting as a hired goon squad for the corporate interests of Baystate. They served to intimidate the nurses and community, and as seen by their assault of Stern, they are prepared to break the law at the bequest of Baystate management by not letting a union representative see to her union members needs before a lockout.

The idea that ‘the police are just doing their jobs’ is actually on point, if you take into account the history of modern policing. In fact, as The Shoestring has pointed out before, many modern police forces were born out of a desire to quell uprisings by workers and slaves. When it is argued that the police are “on our side,” that is the root of the problem. The role of the police, in many cases, is to protect and defend the status quo — one of extreme racism, sexism, and other forms of oppression in the interest of the 1% and their profits. When the local police are called to the scene of a labor dispute, the question arises, who or what are they there to protect. Whose side are the police on.

Kate Nadel is a political activist and community member in the Pioneer Valley.