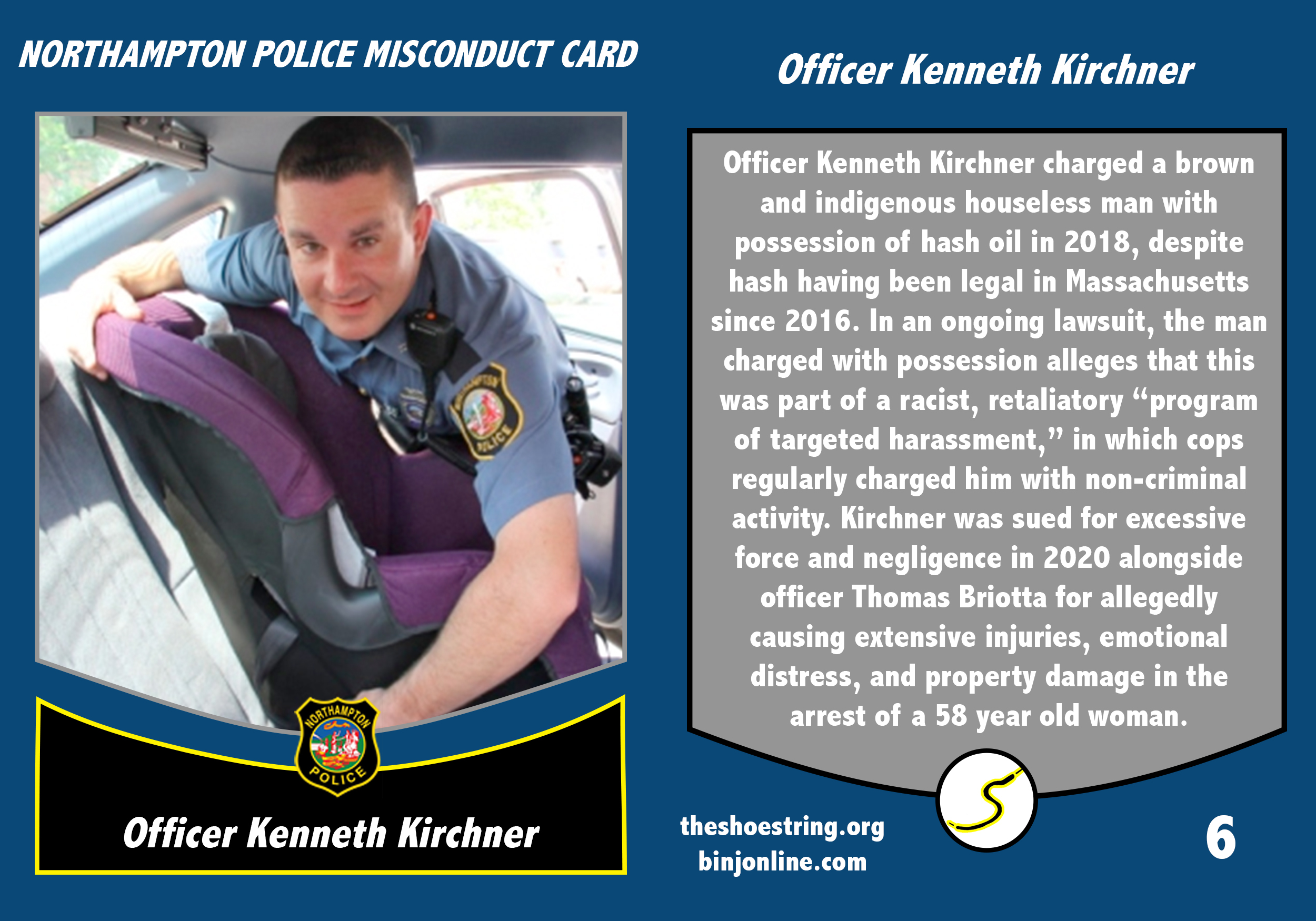 “A kid in a candy store”

In 2017, the Northampton Police Department received a grant from the retailer Wal-Mart to produce baseball style trading cards to be handed out to school children in the city. Kids who successfully collected all 50 cards were given a ride to school in a police cruiser. In response, The Shoestring is creating Northampton Police Misconduct Trading Cards. This is the fifth in the series. For #1 Robert Powers, click here. For #2, Alan Borowski, click here. For #3 Thomas Briotta, click here. And #4 Andrew Kohl, click here.

Kenneth Kirchner is one of five officers named in Eric Matlock’s ongoing lawsuit against the Northampton police. In 2018, Kirchner arrested Matlock and charged him with possession of hash oil, despite the fact that recreational cannabis has been legal in Massachusetts since 2016.

This was one of several incidents in which Northampton police arrested Matlock and his family members for legal activity. In his lawsuit, Matlock alleges that these arrests were part of a “program of targeted harassment,” in retaliation against Matlock “for protesting at City Hall and for subsequently protesting and organizing community opposition to his arrest.” In addition to his arrest by Kirchner with charges for possession of hash, Matlock and his family were charged with calling a police officer a bad name and raising a middle finger to an officer, neither of which are crimes. These charges were dismissed in court.

In his lawsuit, Matlock alleges that by charging him with something that was not a crime, Kirchner “maliciously used the criminal-complaint process,” and that these retaliatory charges constituted a violation of his right to free expression and denied him equal protection of the laws, “in part or in whole because he is of African American and indigenous descent.”

Kirchner and fellow officer Thomas Briotta were also named in a 2020 lawsuit brought by Debra Horton, who claims the two officers used excessive force and “[intentionally inflicted] emotional distress” when arresting her in 2017. According to the lawsuit, the two officers were dispatched to Cooley Dickinson Hospital for a “disturbance,” and upon arrival asked the ER staff whether they should remove Horton from the property. The lawsuit states that the officers then asked her to stay put in the parking lot until they brought her belongings to her. When she attempted to leave anyway, Briotta allegedly chased her and grabbed onto her right wrist, which caused her to yell out in pain due to the pins in her right wrist from a previous surgery. After Briotta handcuffed her and Kirchner assisted him in bringing Horton to the police cruiser, Horton “repeatedly insisted that her wrists were in great pain,” and was allegedly “assaulted by Officer Briotta when she insisted that he needed to loosen her handcuffs.”

Horton alleges that during this arrest, she “suffered injuries to her shoulder, back, face, head, wrist, and other body parts as well as emotional distress, pain and suffering and property damage.” At the time of her arrest, Horton was 58 years old, weighed approximately 100 pounds, and had been seeking treatment for alcoholism at the Cooley Dickinson Emergency Department. The lawsuit states that since the arrest, she “has received and continues to receive medical treatment and counselling for these injuries.”

In 2017, Kirchner returned to patrolling after spending more than two years recovering from an injury to his leg. He said that “his first day back to work […] was like being a ‘kid in a candy store.’”

NPD Misconduct Trading Cards are produced in partnership with the Boston Institute for Nonprofit Journalism. The Shoestring is committed to bringing you ad-free content. We rely on readers to support our work! Please pay for The Shoestring on Patreon.