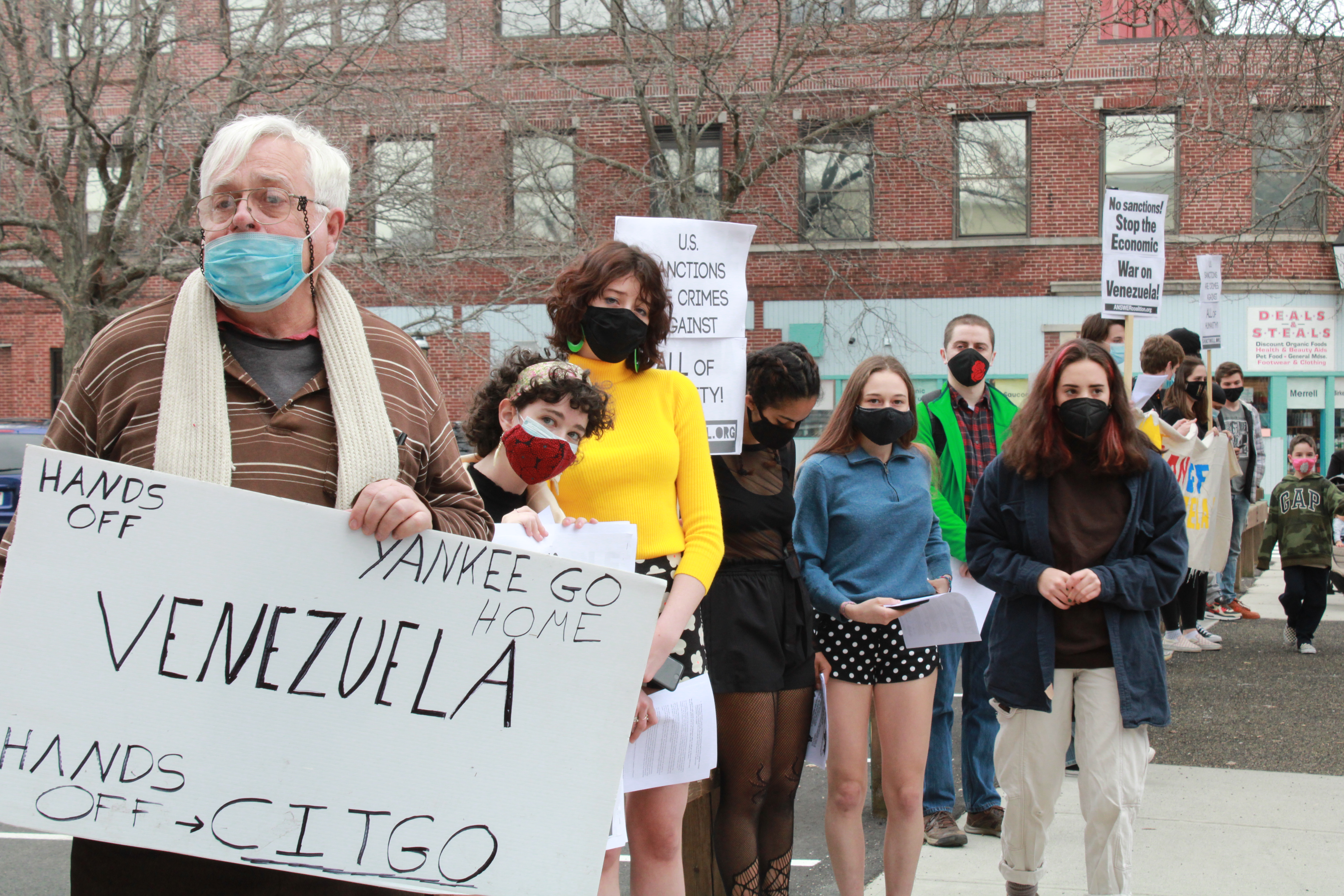 “Our policy towards Venezuela, or any other country, ought not to be motivated by greed.”

On Wednesday, March 24th, peace activists gathered outside Representative Jim McGovern’s Northampton district office to protest US policy towards Venezuela. Though the US alleges that its series of sanctions seek to target the Venezuelan government, in reality they are an assault on Venezuelan sovereignty, a war crime, and a crime against humanity as defined by international law.

According to the Center for Economic and Policy Research, the US sanctions on Venezuela serve as a form of “collective punishment” of the Venezuelan people. Hector Figeralla, an activist from McGovern’s district, says, “The sanctions imposed on the people of Venezuela are illegal under international law and also immoral, especially during a global pandemic which makes pandemic response extremely difficult due to economic restraints. My father and uncle died in Venezuela due to lack of medicines caused by the sanctions; they need to end.”

The March 24th date was chosen to honor the legacy of Archbishop Óscar Romero, a Catholic leader and human rights activist admired by McGovern who was assassinated on this day in 1980. Drawing the connection between the struggle for human rights then and now, and the role of the US in both, activists called on McGovern to defend human rights, honor international law, and recognize Venezuelan sovereignty by:

1) calling to lift all sanctions;

2) rejecting U.S. recognition of Juan Guaido as “Interim President”; and

3) calling for CITGO ownership and assets to be returned to Petróleos de Venezuela, S.A. (PDVSA).

The US has been pursuing a regime change policy in Venezuela since the election of President Hugo Chávez in 1998, and now with President Nicolás Maduro. US economic sanctions are a core component of US regime change policy in Venezuela, Syria, Iran, and other countries. The logic behind economic sanctions is to make life so difficult for average people – by limiting or cutting off their access to money, food, medicine, and other necessary goods – that the people of Venezuela will rebel against their own democratically elected government, which Washington doesn’t support.

US sanctions against Venezuela began as targeted sanctions against individuals within the Venezuelan government, but were subsequently expanded to include PDVSA, Venezuela’s state-owned oil company, and government-run food distribution programs like CLAP. The sanctions have devastated the Venezuelan economy and have contributed to hyperinflation and shortages of basic goods for the general population. Much of Venezuela’s revenue came from the oil industry, and a US boycott of Venezuelan oil (which also prohibits other countries from buying Venezuelan oil) significantly contributed to the country’s economic collapse. US sanctions have exacerbated shortages of food and medicine and have cost the lives of tens of thousands of ordinary citizens.

In a brazen infringement upon Venezuela’s sovereignty, the United States, the European Union, and right-leaning Latin American countries arbitrarily declared Juan Guaido, a little-known Venezuelan opposition figure who never won an election as the country’s “interim president” in 2019. Guaido openly called for a military coup to overthrow the Venezuelan government and openly courts US intervention and sanctions. Recently, the European Union ceased recognition of Guaido but continues to refuse to recognize the Venezuelan government.

Citgo is a U.S.-based subsidiary of PDVSA and is a vital source of hard currency for Venezuela. After President Hugo Chavez nationalized Venezuela’s oil industry, oil revenues contributed to an extensive social safety network that included free or affordable healthcare, housing, and education initiatives. The US government authorized the sale of Citgo shares to deprive Venezuela of this vital asset. Regarding CITGO, McGovern said, “I am for Venezuelan assets and natural resources being controlled by the Venezuelan people.”

While McGovern and the activists were in agreement in opposing “blanket sanctions,” he stated his support for “targeted sanctions.” The activists pointed out that “targeted sanctions” are not that “targeted” as they have the effect of harming countless innocent people, and expressed a hope to continue the conversation. Despite the divergence of perspectives on this point, the activists thanked Representative McGovern for recognizing the harm of the broad reaching sanctions imposed under the Obama administration and that continued under Trump, and expressed a hope to continue the conversation with McGovern about sanctions over the long term.

While there were many agreements and some disagreements between the two parties, Rep. McGovern thanked the peace advocates for their activism, stated that he would challenge the Biden administration in regards to US policy towards Venezuela the next day following the rally and promised a follow-up meeting with his constituents. The organizers of the rally have reached out to McGovern’s office in the weeks since requesting further action to protect Venezuelan sovereignty and human rights and continue to wait for a plan of action from the Congressman’s office.

The rally, attended mostly by Western Massachusetts residents and constituents of Congressman McGovern, was also attended by a delegation from Boston, MA and Hartford, CT. The rally was sponsored by the Anti-Imperialist Action Committee, the Latin America Solidarity Committee of Western Mass, The Resistance Center for Peace and Justice, the Pioneer Valley Chapter of the Green-Rainbow Party, the Party for Socialism and Liberation (Western Mass.), Massachusetts Peace Action Latin America Working Group, CODEPINK Western Mass, the Greater Hartford Solidarity Committee, and others.

Celina della Croce is a coordinator at Tricontinental: Institute for Social Research as well as an organizer, activist, and advocate for social justice. Michael Kowalchuk is a PhD candidate at the University of Massachusetts Amherst. He is an active member of the Anti-Imperialist Action Committee, the Latin America Solidarity Coalition, and the Party for Socialism and Liberation. Photo courtesy of authors.