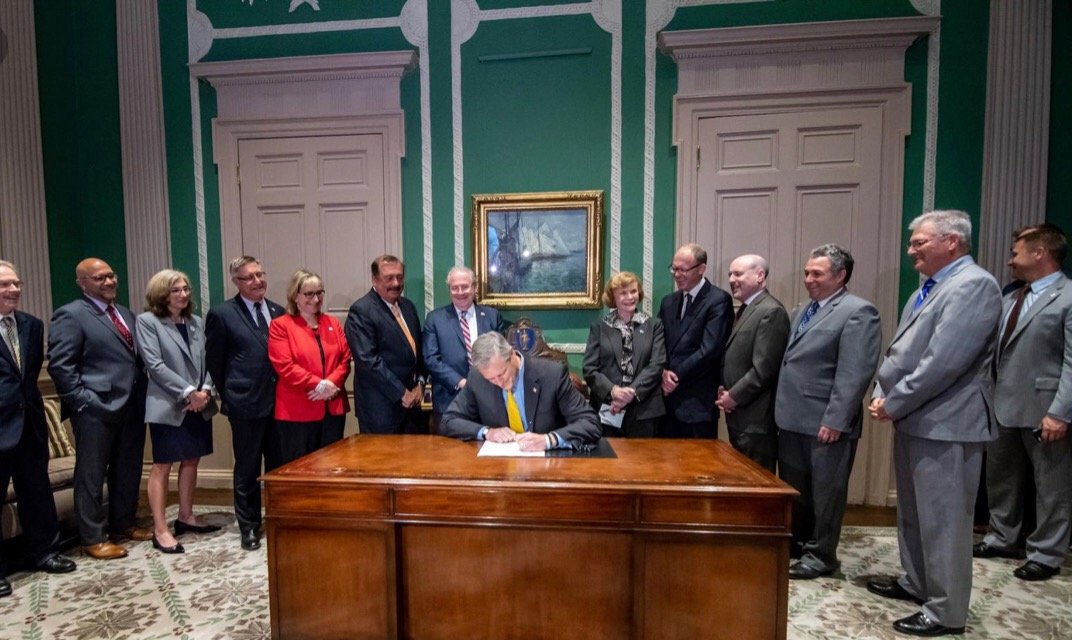 Every single employee in the room had just been informed of a pay cut to little fanfare. It was announced during an ordinary 7:50am meeting that occurs before opening up the store, the retail location of a national chain situated on Route 9 in Hadley. However, to call it an announcement would be letting management off easy—to “announce” a pay cut implies that they let the employees know before the cut went into effect. Instead, employees noticed an accounting change on their paychecks after the first pay period of 2019. When multiple people asked questions about what many perceived as a “mistake,” management decided to explain the pay cut at a meeting.

We were told that overtime pay on Sundays and holidays is being phased out as a result of the Grand Bargain. As part of the landmark deal between Republican Governor Charlie Baker and the state’s Democratic Legislature, pay is going from 1.5 times our hourly rate on Sundays and holidays to 1.4 times, effective January 1, 2019, and this would decrease to 1.0 times the hourly rate by 2023. We were not told about the wider details of the Grand Bargain, a series of policy changes that “will ultimately raise the state’s minimum wage to $15 an hour, implement a guaranteed paid family and medical leave program, and establish a permanent sales tax holiday.” It also includes a base wage increase for tipped workers from $3.75 per hour to $6.75 per hour.

At the time of the meeting, I was privy to the greater details of the Grand Bargain at the behest of a friend, who encouraged me to look into it because I am in the losing demographic: someone who works in retail who already makes $15 an hour. However, without that prompting, I’m not sure if I would have known much beyond that minimum wage will rise to $15/hr. In fact, prior to doing research, I was excited about the minimum wage increase and the Grand Bargain, even if it meant that I lost a benefit, assuming that it must be a good deal to be considered such a “grand bargain.” After looking into it, I realized that Sunday and holiday pay represents a significant chunk of income, and the loss of this benefit amounts to a 10% pay cut for retail employees who regularly work those days (Appendix 1). Because every employee at our store makes more than $11/hour, the MA minimum wage in 2018, they saw no benefit from the minimum wage increase, and instead only saw a pay cut through the form of decreased pay on Sundays.

And yet, no employee at the meeting flinched. Only because I had been tipped off to this deal did I have any sense that it may not be as innocuous as it was presented. In light of a palpable calm in the room, I decided to raise my hand and ask if the company had plans to raise wages in order to compensate for the lost income. Our store had been breaking sales records and at times tracking double-digit growth year over year. I figured that, if nothing else, the management should be forced to sweat through a tough conversation over cutting their employees’ pay. Our head manager took my question about raising wages and responded with: “We don’t work here for the money, we work here because we like to serve people.” A lackluster response, at best. Let me be clear: every single employee at this store is there for the money. If it was about service, many would be taking care of sick family members before they volunteered to show up and work retail five days a week. That comment segued into a small speech about values, such as how our great customer service is our edge, and then the meeting was over.

Despite a woefully out of touch response from management, a coworker turned to me and said, “don’t worry, we’re not losing that much money, it’s just $15 less a week, you won’t even notice it.” And though I knew that number would add up, I did not have the numbers on hand to counter him. During the meeting it was hard to wrap my head around how a group of workers could so peacefully accept a pay cut, even if they thought it was small. Where were the pitchforks, or at least a sassy quip? But over the next couple days, I realized that my coworkers’ reactions need to be considered in context. The Grand Bargain was branded as an example of bipartisan progress, of the type of politics no longer seen in our tense, gridlocked climate; it is from our greater past. And my coworker is correct that the Grand Bargain’s incremental decrease of Sunday pay makes it such that the loss from year to year is incremental, thus difficult to perceive. Perhaps the state of labor is such that no one wants to speak up in the face of decreased pay because they fear for their jobs, by automation or otherwise. To their credit, only with a full understanding of the Grand Bargain does this “bargain” no longer seem so innocent. My coworkers expressed that if a minimum wage increase helps workers state-wide, and if trading away our time-and-a-half is what it took to get that passed, then that’s a sacrifice we should make for our fellow citizens…  the exact argument I had made before beginning to research the topic. Without knowing what was traded away to form the basis of the compromise, it makes sense why someone would accept the news and move on.

The knowledge I lacked is that initially there was no intent to lose Sunday and holiday pay on the pathway to a minimum wage increase. The Grand Bargain only emerged as an attempt by the business lobby and our state representatives to prevent three ballot propositions from making it to election. The first was a $15 minimum wage hike by 2022, which is one year earlier than the increase from the Grand Bargain, and included no loss of Sunday and holiday pay. The second was a millionaire’s tax, which ended up being ruled as unconstitutional by the Massachusetts Supreme Court. Both of these propositions were backed by Raise Up Massachusetts. The third proposition was a decrease of the sales tax from 6.25% to 5.0%. 78% of Massachusetts voters supported raising the minimum wage to $15 by 2022, and 77% favored a millionaire’s tax, according to WBUR polls. Jon B. Hurst, president of the Retailers Association of Massachusetts, said, “if any of these three go to the ballot, they are going to pass.” The Grand Bargain is a “bargain” because it takes off the table the strongest demands made by the ballot propositions, not because it achieves conditions that were unattainable otherwise. When my coworkers and I initially took it as a foregone conclusion that there must be a sacrifice in order to get a minimum wage increase, we were wrong.

Rather than focusing labor’s ire at corporate profits and executive salaries, the Grand Bargain ultimately robs from Peter to pay Paul. It finances a minimum wage increase by removing wages from those making above minimum (in retail), in an economy where CEOs can make 300 to 1 what the average employee earns. Meanwhile, when employees at Stop & Shop went on strike in April for better pay, they also demanded the return of Sunday pay, and won. Through organized strike and negotiation, not general “compromise,” workers demanded that time and a half remain; showing that if government won’t act, workers will.

We cannot let those at the top pit workers against each other, sewing greater divisions between the poor and the middle class, while strengthening the divide between the entire working class and those at the top. In our era of growing inequality, the New Gilded Age, where corporate profits are soaring and the divide grows ever larger between the working class and the ruling class, we need to be critical of those in power, even if those people are Democrats in deep blue Massachusetts. The people were deprived of their opportunity to vote on measures that would directly affect them, and it resulted in the stripping of a popular benefit for working people. To quote chair Steven A. Tolman, president of the Massachusetts AFL-CIO and a former state senator, “The Legislature takes away overtime of hard-working middle-class people, without any debate or very little debate, and then they call it a grand bargain?”