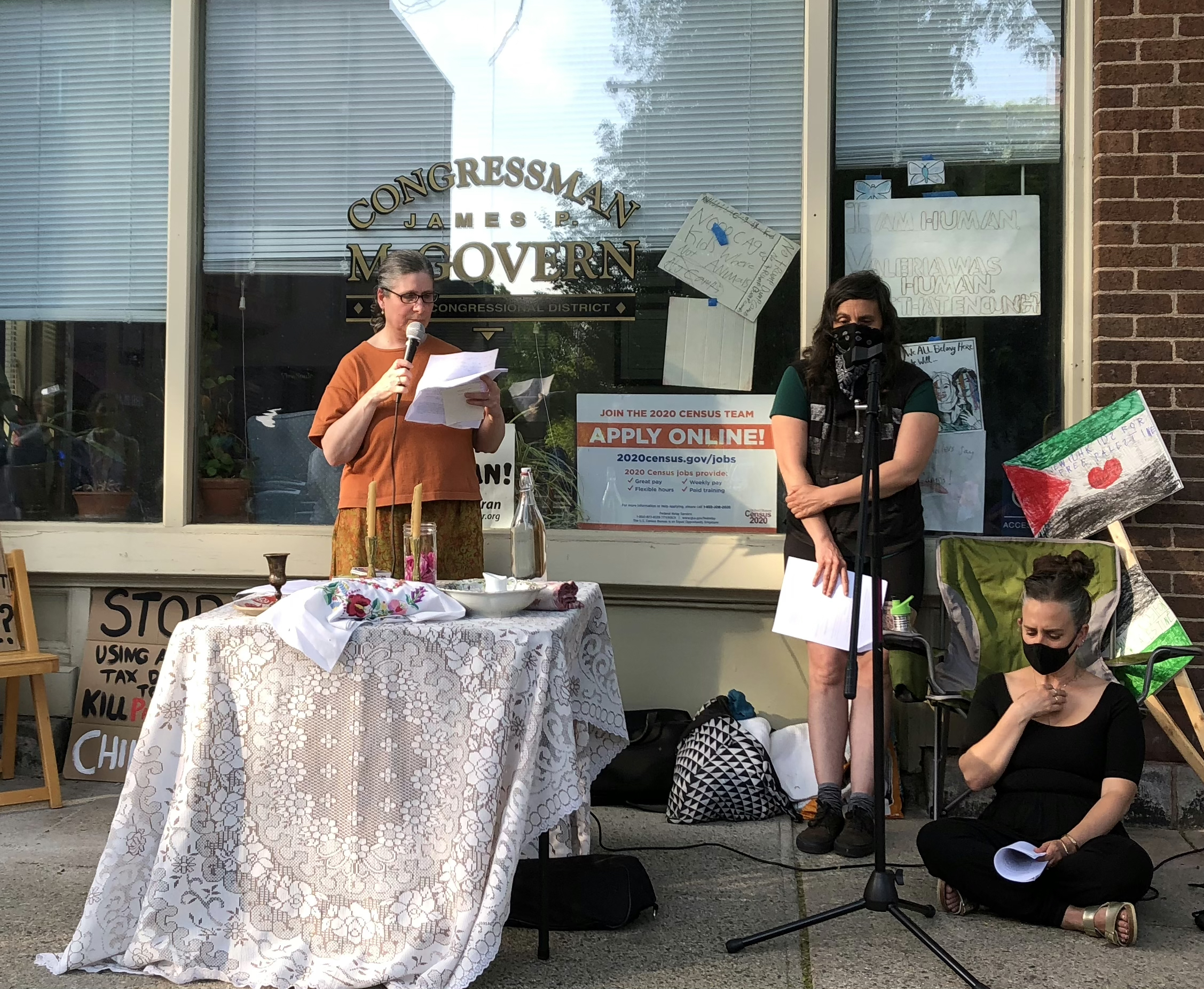 On Friday, community members gathered outside Rep. Jim McGovern’s office on 94 Pleasant St. in downtown Northampton to share in the tradition of Shabbat and to ask McGovern to support legislation that protects Palestinians. The event called, “Shabbat in the Streets for Palestinian Liberation,” was organized by Rachel Weber and Dori Midnight out of urgency, in response to the recent Israeli military assaults that have killed 240 Palestinian civilians, including 66 children, and against the forced displacements of Palestenians, both aided by the United States investment in Israeli arms. The current forced displacements are happening in occupied East Jerusalem where Palestinians, many of whom are refugees of the 1948 displacement of Palestinians by Israel, are being forced out of occupied territory in order to increase the Israeli demographic there.

Musicians played cello, fiddle, and accordion as a crowd gathered.  Over 70 people attended the ritual which included Shabbat blessings and a line-up of speakers. Dori Midnight, a Northampton resident who practices ancestral Jewish plant medicine, led attendees in song and prayers and a number of speakers shared their sadness, hope, and demands behind a table set with traditional Shabbat ritual items including candles, wine (grape juice), and Challah.

Rachel Weber, a local defense attorney who organizes with Jewish Voice for Peace and Decarcerate Western Mass, connected the Palestinian resistance against Israeli occupation to the resistance of Native Americans against settler colonialism in the U.S.  “We are currently on Pocumtuck land. Native Americans still live here and it is an ongoing struggle to keep their land. There is an ongoing resistance to settler colonialism in the United States. Palestinians are also resisting. They are engaged in resistance in Israel. There is genocide and displacment, and there is also resistance.”

Midnight also spoke at the event, noting, “It is complex to hold Jewish ritual space, to engage in our traditions when we see Judaism used as a weapon of Zionism and nationalism. Judaism is older than zionism.”

Michel Moushabeck, a Palestinian book publisher and musician, told the crowd that the recent cease-fire was not a cease-fire. “Even when Israel does not fire a single bullet, violent assault on Palestinian rights to freedom will continue.”

Hannah Moushabeck, a Palestinian living in Northampton and Michel’s daughter, shared, “I am tired of the tone policing of Palestinians. Why can’t we be angry about things that have been happening for 73 years?”

Jamila Gore, a police abolitionist who is running for the Northampton City Council At-Large seat in November also spoke. When asked why she came out to the event, she told The Shoestring, “I will say the same thing I said at my first Palestinian liberation rally in Washington D.C. in 1999: free Palestine.”

Diana Sierra, a Smith and UMass professor who sits on the board at the Pioneer Valley Workers Center, updated the crowd on the current national insurrection against neoliberal economic policy in Columbia and tied the Palestinian struggle to the struggles of immigrants in the U.S. “I do not understand how people are not crushed under the weight of their own contradictions to protect immigrant rights but support Israel when ICE is trained by Israeli army.”

The Shoestring asked some attendees what brought them to Shabbat in the Streets that night. Clara Kaul shared that she was there because, “As a Jewish American citizen I feel I have to do everything I can to stop the violence.” Branch, who was visiting from Brattelboro, VT shared,  “All of our liberation is tied to Palestinian liberation. The national discourse is changing.”

Organizers asked that attendees put pressure on McGovern to sign onto legislation in support of the Palestinian people by calling his office and writing letters. He has yet to support legislation that would halt a $735 million dollar weapons sale to Israel nor pending legislation to protect the rights of Palestinian children. Weber asked the crowd, “Where is Jim? He is not doing what he said he would do. We are his Jewish constituents and we demand he act now.”