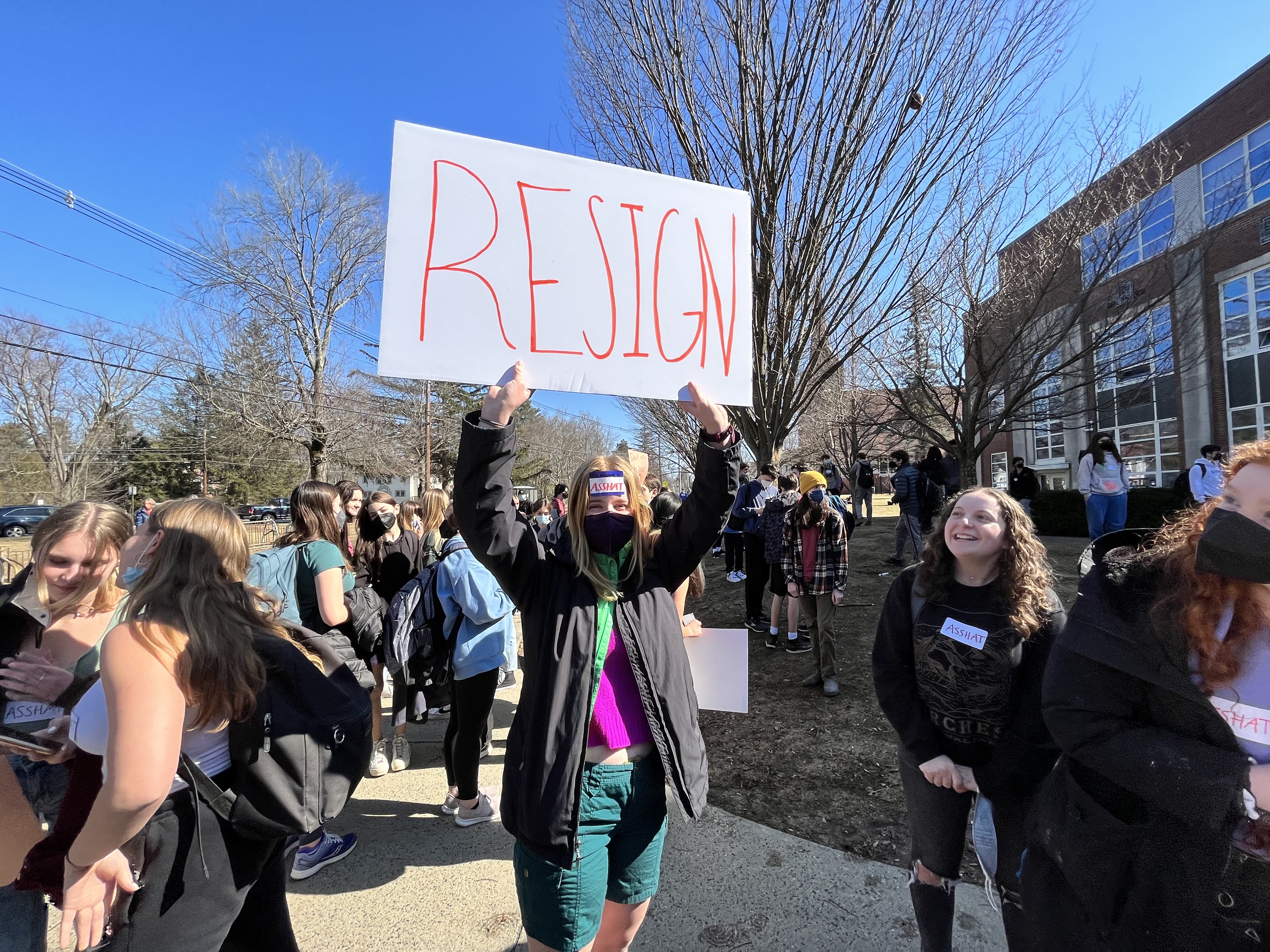 NORTHAMPTON — On the sunny afternoon of March 16th, 2022, I walked out of my Latin class and gathered with other students outside the front doors of Northampton High School. This was no isolated event but a protest on school grounds organized by students in my senior class, who had had enough of Principal Lori Vaillaincourt’s way of running our school and poor leadership from the current school administration as a whole. Students agreed that they wouldn’t stand for the growing rift between students and school administration, or the negative school culture stemming from it. We wanted a plan for how to get back to trusting administration, and how to make our school’s culture more equitable. We wanted to change course.

Many students (including me) had heard a thing or two about Principal Vallaincourt online. We had heard stories of her closing down gender neutral bathrooms and blatantly treating BIPOC students differently. Most of us students weren’t that surprised when the news leaked that Principal Vallaincourt had called the student union “asshats” and admitted to using “equity” as a buzzword to placate any desire for real change. In the past, scandals involving Vaillancourt had their time and then went away, but to organizer Lucy Bernhard, this wasn’t enough. The Gazette’s revelations of Vaillancourt’s recent comments created the perfect moment to take a stand against injustice. So, students—myself included—walked out.

To me, it looked like the whole school had assembled outside on the front steps of NHS on that sunny afternoon. There were dozens of students- kids I’d seen at other protests around the Northampton area, and friends of the organizers; representatives of every grade, sports team, every club, and every friend group. I spoke with first-year students who, despite being new to Northampton High, still wanted to take a stand against injustice, and upperclassmen who wanted to leave NHS better than they found it. I spoke with students wanting to support their friends on Student Union who’d been insulted, and students who’d been personally affected by the school administration’s failings.

The walkout was a rush of jabbering friends and handwritten signs proclaiming “Resign” aimed at Principal Vaillancourt, protest chants led by the organizers on the front steps of the school and kids walking around with handwritten stickers saying “asshat” plastered across everything from water bottles to foreheads. While there were teachers and police officers standing on the outskirts with crossed arms, they did not interfere. When I asked a teacher for a statement, they declined, saying the organizers requested them to stay away, a request which they gracefully respected. It was an outpouring of student voices on that warm March day, the next chapter in a longstanding tradition of student protest at Northampton High. I was glad to be a Northampton student that day.

The students who walked out told me they are tired of hearing about scandal after scandal and not seeing any real change come out of them. While I’d heard rumors of Vaillaincourt’s racism, I spoke to a junior, who wished to remain anonymous, about how she’d stopped a BIPOC student in the hallway and searched them without parental consent after catching a whiff of weed. A freshman, who also wished to stay anonymous, described how disabled students had to go all the way to the first floor to access bathrooms since Vaillancourt had closed the ones on the second and third floors. I also spoke with Juniors Spencer G,. Audrey O., and Dynasty, who spoke about how students are intimidated by and mistrustful of her. They all agreed that there is something wrong with our school culture and Vaillancourt represents it.

Yet as there is in every social issue, there are systemic issues at play. A sophomore who wishes to remain anonymous brought to my attention that the past few years haven’t been easy ones for educators, and bureaucracy is notoriously slow in making change. Students at NHS are well aware that the issues in question are systemic, but requiring real accountability for Vaillancourt’s high profile disrespect of students is an obvious starting point to begin implementing changes. One example of the issues at play was last year, when administration tried to change the NHS math curriculum without consent from the Northampton School Committee, the administration has continually swept comments such as Northampton School Committee Member Michael Stein’s comment about “first- and second-class learners” under the rug. It’s no wonder us students walked out.

Moving forward, students don’t want our demands of accountability for school administration to be brushed off as just the product of another case of boisterous teen spirit. Organizers Lucy Bernhard and Julia Albro-Fisher hope Vaillancourt can show real remorse rather than just the apology email she recently sent out. Though Vaillancourt has sent out an email apologizing for her “asshat” comment, the issue is clearly much larger than that and students want more than an apology. She’s apologized before, but nothing has changed. According to organizer Maya Williams, an apology isn’t enough. In the coming months, Williams and others hope to see a real roadmap from administration of how they’re going to rebuild their relationship with students.

What we need is an overhaul of the administration. Principal Vaillancourt’s contract comes up soon, and through this walkout we’re asking Superintendent Provost to consider not renewing Vaillancourt’s contract. Organizer Lucy Bernhard reminded me that though the homemade stickers and signs handed out by students at the walkout were nice gestures, the point was to get the adults to listen to us. Vaillancourt’s actions have been glossed over for too long and we will not sit quietly while this is shoved under the rug like so many scandals before it. Between the pandemic and the protests, these past few years have shown our generation that we are powerful when we come together. The walkout on March 16th showed that. We just hope the adults around us realize it too.

Maddie Raymond is a student journalist from the Hilltowns. She is known for her opinion pieces on social justice topics, which are featured in her monthly column in the Greenfield Recorder called Speak Now. She is a strong proponent of journalism to advance social justice.