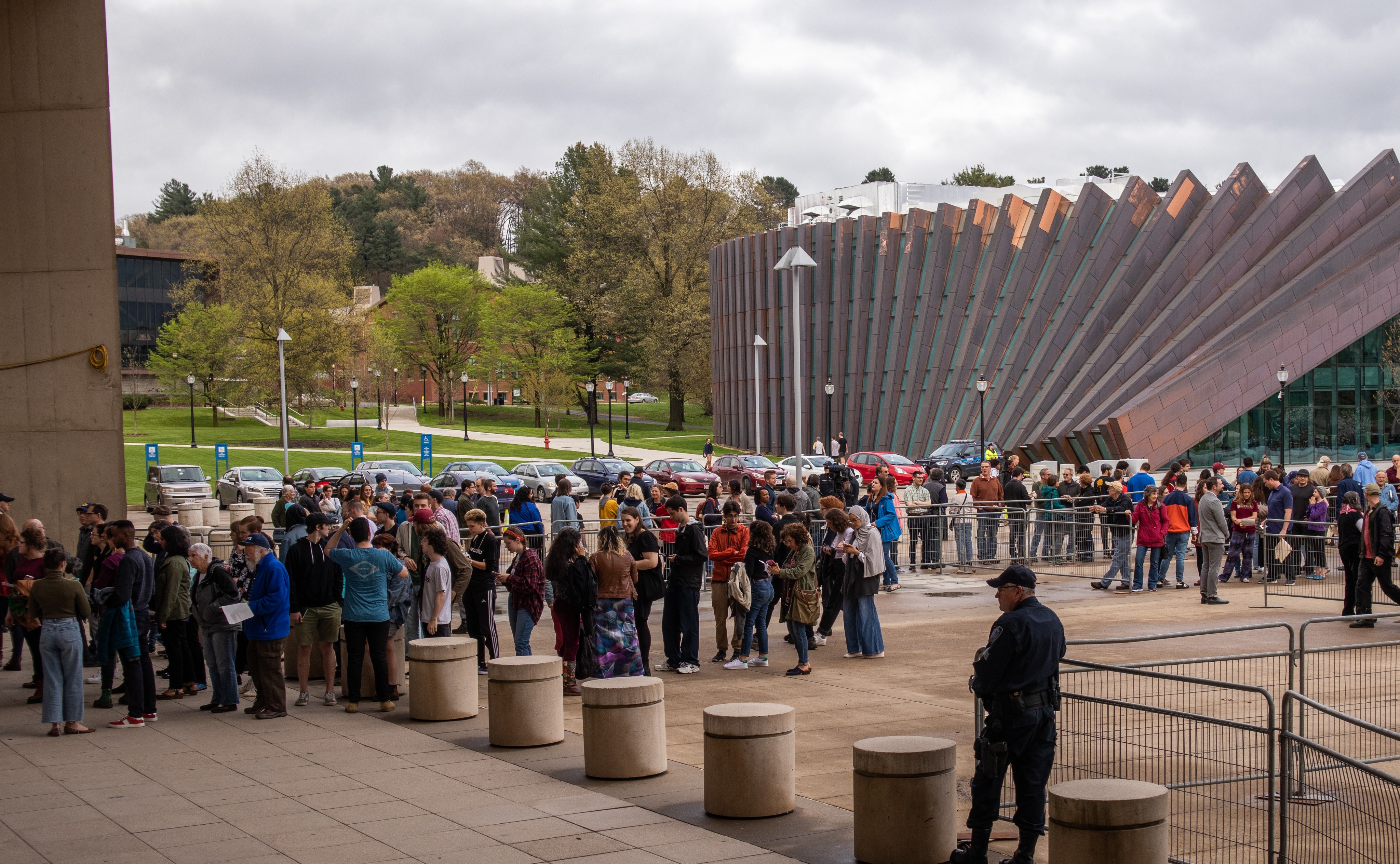 Last month, a longtime pro-Israel, pro-Zionist lawyer filed a lawsuit on behalf of three unnamed UMass Amherst students attempting to censor — or at least move — an event at the university about, ironically, the censorship of pro-Palestinian voices. Lawyer Rachel Weber fought the plaintiffs’ request for an injunction ordering the university to move the event off campus — it was denied. The event took place on May 4 to a packed audience at the Fine Arts Center. Co-editor Will Meyer spoke to Weber about the suit and its larger implications.

W: To get started, if you wouldn’t mind talking about the lawsuit: who was behind it? Who were the plaintiffs? On Democracy Now! you described the plaintiffs’ circular claim of anti-semitism. What did you mean by that?

RW: So there was an event planned at UMass for May 4th, “Israel, Free Speech, and the Battle for Palestinian Rights.” It was organized by the Media Education Foundation and its founder Sut Jhally, and the panelists included Palestinian activist Linda Sarsour and Temple Professor Marc Lamont Hill, the sports editor for The Nation Dave Zirin, Roger Waters, with Vijay Prashad moderating. Vijay is an international commentator and he has a research institution called the Tri-Continental.

The topic of the panel was going to be about the backlash against and attempted censorship of people who advocate for Palestinian human rights. Specifically, the panel was going to address the claim that anyone who criticizes the Israeli government is anti-semitic. In response to this there was a group of people who tried to do exactly that: to censor a conversation about censorship. There were three unnamed Jewish students who were the plaintiffs in the lawsuit, which said that putting on a panel on UMass’ campus would violate its nondiscrimination policy because, essentially, in criticizing Israel and in talking about Palestinian rights, the panel and all of the panelists were anti-semitic.

The suit asked that the event be moved off campus, essentially saying that it violated the contract between UMass and the students by not protecting them because incidents of anti-semitism would go up in the wake of this event. The only defendants that it named were Board of Trustees and some of the administration at UMass.

The plaintiff’s lawyer was asking for an injunction that the event be moved off campus. This is what’s called a prior restraint on speech, where a party asks a court to stop speech before it happens on the grounds that it will cause harm. For a prior restraint on speech, you really have to make an incredibly high showing of the harm that would be caused. Also, there’s even a higher bar when you’re trying to restrict speech on a university campus because universities are supposed to be areas of vibrant intellectual thought and debate and exchanges.

W: Who filed the lawsuit?

Because the students were unnamed we don’t know anything about them. But we do know about the lawyer who filed it, Karen Hurvitz. She has gotten support before from a group called Americans for Peace and Tolerance, which often gets in trouble for Islamophobia and racism out in the eastern part of the state. Its founder, Charles Jacobs, has essentially been condemned  by the Jewish Community Relations [Council] in Boston for protesting the building of a new mosque in Roxbury, accusing Boston Muslim leadership of being secret “extremists.” Additionally, in collaboration with Americans for Peace and Tolerance, Hurvitz filed a lawsuit against the School Board of Newtown, Massachusetts, which is a very Jewish suburb of Boston, for having anti-semitic and Islamic fundamentalism in their school curriculum. And apparently she couldn’t find a single parent of a student in the school district to sign on as plaintiffs, and so the plaintiffs weren’t even parents of students at the school. So this is the level of zealous that we’re talking about.

And you wanted to challenge how they were defining anti-semitism?

Yes. Jewish Voice for Peace was one of the co-sponsors of the event to challenge the definition of anti-semitism that was being used in the plaintiff’s filings. What the plaintiff was saying is any criticism of Israel or any criticism of Zionism as a political movement (that started in the late 19th century) amounted to anti-semitism. JVP wanted to intervene to say “actually, that is a controversial and inflammatory definition of anti-semitism that is offensive to many Jews.” For many of us, we feel a moral obligation to critique the Israeli government because the inhumane and illegal abuses of Palestinians are happening in our names, and, as American Jews, with our tax dollars. Also, equating anti-semitism with any criticism of Israel—and the racist, Islamophobic laws and policies it brutally enforces—is dangerous for Jews because it cuts us off from potential allies who are working against the real threat to Jews: white supremacy.

W: I think at one point you had mentioned — I don’t know the history of Jews being targeted at UMass’ campus — but students from Students for Justice in Palestine (SJP) have been targeted, is that correct?

RW: Part of what the attorney for UMass did was she contacted the chancellor to see if there had been any reports of anti-semitic incidents since the flyers for the event started going up. They said they had not received any reports. On the other hand, Students for Justice in Palestine had been filing claims of harassment because they were being followed around when they were putting flyers up. There was a particular person, who was protesting the event, who was showing up to the workplace of a student in SJP. And certainly, the Jewish Voice for Peace Facebook page was being flooded with people calling us derogatory names, and a hate group distributed flyers online and at the event that had pictures of the panelists with swastikas all over their faces. Students for Justice and Palestine and JVP were actually on the receiving end of really derogatory, inflammatory hostilities, that, again, sometimes included being followed around on campus and things like that.

And unfortunately that’s just a reality of engaging in advocacy for Palestinian human rights. You can expect to get threatened, and the leaders in the movement are going to receive death threats and threats to their family. Whereas the Boycott Divestment Sanctions movement does not send anybody death threats. Students for Justice in Palestine, Jewish Voice for Peace, we don’t threaten anybody.

Linda Sarsour said this really well at the panel, she said “Look, my perspective might make you uncomfortable, but we do not make you unsafe.” There are Zionist groups in this country who do actually make people unsafe. Marc Lamont Hill lost his job at CNN. Linda Sarsour has received multiple death threats. There’s a whole website called the Canary Mission, which profiles students and professors and activists who speak out in criticism of the Israeli government and for Palestinian human rights so they might have a more difficult time getting jobs..

W: There are a lot of real harms done.

RW: And that’s nothing compared to the harms being suffered by Palestinians. I mean Gaza’s being bombed as we speak. And to not be able to bring to light and to discuss in an open way what is happening on the ground in Palestine makes it much more dangerous for Palestinians and harder for the international community to intervene because there’s this constant specter that if you speak up for Palestine you will be labeled anti-semitic.

RW: The event was a huge success, Angela Davis gave an introduction over video, and there were 2000 attendees and 10 protesters. Standing ovations for all of the speakers, etc. And the lawsuit is still pending…plaintiffs are still seeking a judgment that UMass violated its non-discrimination policy by hosting the event.  We go back to court on June 17 in Boston for a hearing on whether the plaintiffs can continue to proceed anonymously, and there could be more court dates in September.

Will Meyer is co-editor of The Shoestring. Photo Gallery by Jen Patrice witlessX