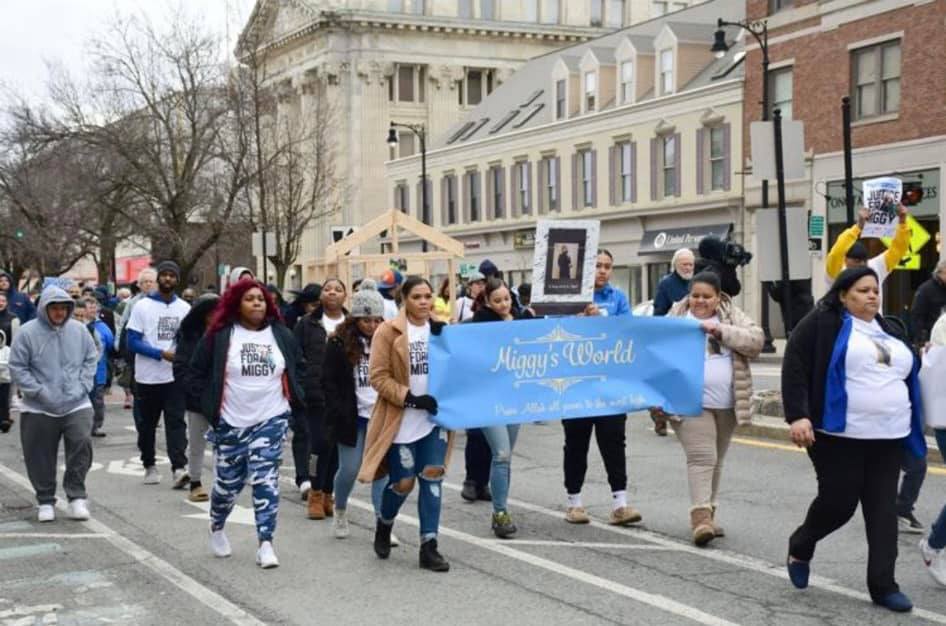 On the evening of March 25, 2022, 22-year-old Miguel “Miggy” Estrella was shot and killed by Pittsfield Police Officer Nicholas Sondrini after multiple 911 calls were placed reporting that Estrella was having a mental health crisis. A new report released by law enforcement officials suggests Estrella was not having a mental health crisis. As local communities across the country are fighting for alternatives to policing and for first responders that are trained to respond to community members in emotional distress, Estrella’s family, friends, and community are asking why a call for help was met with lethal violence and Estrella being killed by police. A Berkshire County District Attorney investigation into his killing is ongoing.

The day after the fatal shooting, Berkshire County District Attorney Andrea Harrington,  released a statement stating the 911 callers had “alerted dispatch that Estrella had a history of mental illness, was cutting himself and was currently located outside of the apartment building.” However, the use of force report released on April 27th by the Pittsfield Police Department (PPD) states that Estrella was not “engaging in any self-harming behavior” when Officer Christopher Coffey responded to the initial call. The report goes on to say, “Mr.Estrella refused both treatment and transport to the hospital by EMS. On the basis of this information, Mr. Estrella did not meet the criteria for a civil commitment under MGL Chapter 123, Section 12A.”  The PPD report does not match the narrative of those that were close to Estrella and who have spoken out since his death.

A subsequent 911 call was placed after Officer Coffey responded to the initial call. According to the PPD, when Coffey arrived the second time, Estrella was wielding a large knife within arms-length of a nearby woman. Officer Coffey drew his taser at which point Estrella turned and moved toward the officers. Officer Sondrini arrived as back up and shot and killed Estrella after Officer Coffey and Officer Sondrini each deployed their taser several times.  According to PPD records, no mental health care professionals were on staff at the time of the call.

Estrella has been described by family, in his obituary, as someone who “…would do anything to provide a lending hand. His biggest phrase was ‘I got you’.” Estrella participated in a program for at-risk youth and was working with a case manager who assisted him in getting the help and support he needed as well as facilitating roles for him at organizations in the community. Miguel worked directly with Roots Rising, a farm based youth development program, as a crew member during the 2016 Farmers Market season, as well as more recently with Habitat for Humanity helping to build homes in his own neighborhood.

In response to Estrella’s death, a community coalition including Roots & Dreams and Mustard Seeds and Manos Unidas Multicultural Educational Cooperative, of which Miguel’s mother, Marisol Estrella is a member, held a march and vigil, Justice for Miguel. On April 10th, over 200 people showed up to Justice for Miguel to show their support for the family, friends and community members who are grieving. Corey Johnson, Miguel’s sister Elina Estrella’s boyfriend, who was like a brother to Miguel, spoke to the crowd at this event saying, “Miguel didn’t need guns, he needed help. Miguel didn’t need the police, he just needed help.”

“What became obvious in the days following his murder by the Pittsfield Police was that Miguel touched the lives of so many of us in Pittsfield,” Dana Rasso, one of the many event organizers, told The Shoestring in a statement. “It’s heartbreaking to see his family, friends, coworkers and colleagues grieving. However, this tragedy has been catalyzing for us as a community. Over-policing, carceral ‘solutions,’ and police violence can seem like abstract notions to those who have never experienced them personally, but Pittsfield is a small enough place that many folks are now seeing and understanding it firsthand.”

Family members and friends, along with concerned citizens like Rasso, and those that organized Justice for Miguel are now attending Pittsfield City Council meetings to demand accountability and transparency from the Pittsfield Police Department and Berskhire DA’s office who did not initially reveal the name of the officer who shot Estrella. Due to the ongoing investigation, the Pittsfield City Council has been mostly silent. However, Pittsfield City Councilor At-Large Pete White told The Shoestring in a direct message on Facebook, “I feel sorry for everyone involved. I offered my condolences to Miguel Estrella’s loved ones after our Council meeting last Tuesday night. I want to see the report from the District Attorney’s Office when it is finished.” He also voiced support for a multi-agency approach to these issues, “I want to see more resources given to our local mental health agencies as well. Those agencies receive State funding for crisis intervention services. The issues surrounding mental health care need to be at all levels, Municipal, State, and Federal to get the support people need.”

[Correction: this piece has been updated to note that Corey Johnson is not Estrella’s brother, but rather like a brother to Estrella and the boyfriend of Estrella’s sister Elina.]