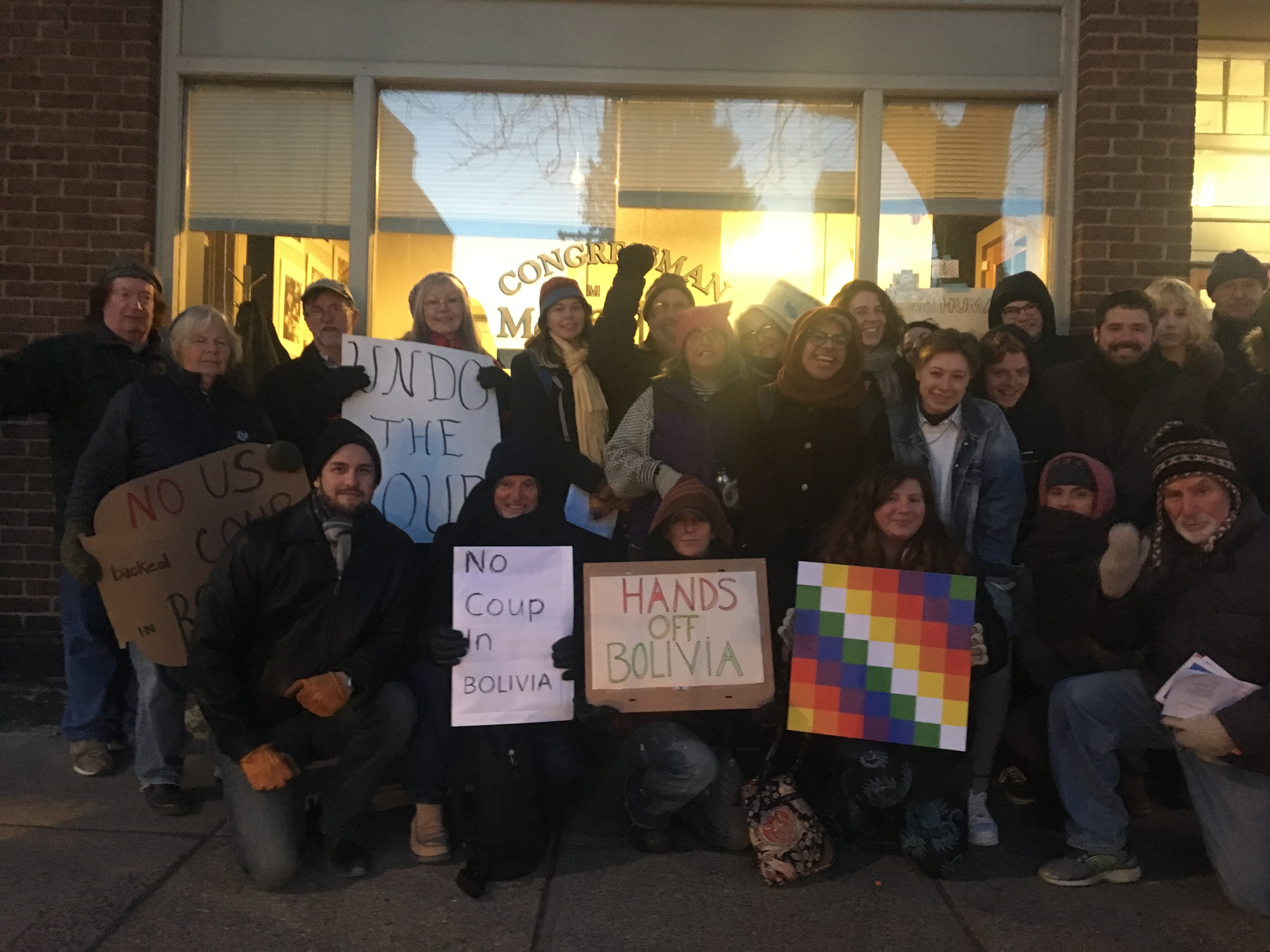 *Celina is a local activist and the coordinator of Tricontinental: Institute for Social Research. She was also among the organizers of the November 14 rally.

On November 13, dozens of residents in Northampton came together to organize a delegation asking Congressman Jim McGovern (MA-02) to condemn the coup in Bolivia. As over a dozen crowded into the room, others staged a rally outside to talk to McGovern’s Northampton district representative, Koby Gardner-Levine, who informed us that the Congressman would be calling in to speak with us on the phone.

Represented by the Venezuela Solidarity Committee, the Democratic Socialists of America, the Pioneer Valley Worker Center, the Resistance Center, and other organizations and concerned citizens, the delegation delivered a letter asking the congressman to immediately and publicly condemn the coup in the media and to sponsor a resolution in Congress to condemn the coup, among other steps to protect democracy and human rights in Bolivia.

The delegation comes in the wake of a recent coup on Sunday, November 10, when President Evo Morales was forced to resign under immense pressure from the military, right-wing groups, and outside forces. By Tuesday, November 12, former senator Jeanine Áñez Chavez had declared herself president with the blessing of the military. Entering the presidential palace with an oversized bible she loudly declared, “The Bible has come back to the [presidential] palace, god bless us!”

In the weeks since the October 20 election, the country has seen escalating attacks against indigenous people, their movements, and their leaders; the Whipala – the indigenous flag – has been ripped off of buildings that have been taken over by the right, then torn and burned; members of the press have been publicly humiliated (the director of radio comunitario was tied to a tree); the houses members of the Movement Towards Socialism or MAS, Morales’ party, have been burned, and Morales’ home ransacked; Patricia Arce, mayor of Vinto (MAS), was publicly humiliated and beaten, drenched in paint and her hair cut off, and made to march barefoot. The list goes on. Since Wednesday’s rally, violence at the hands of the Bolivian police and military has spread against the massive mobilizations across the country condemning the coup. On Friday, at least five protestors were shot dead and hundreds injured in Cochabamba in what is being referred to as a massacre, adding to the mounting count of those killed and injured (most recently estimated to be 18 killed and 500 injured since the October 20 elections).

The pretext? Election fraud. The facts? A recent report by the Center of Economic and Policy Research (CEPR) refutes the claims made in a press release from the Organization of American States (OAS), which has been used as the main source to delegitimize the elections and justify the coup. It is worth noting, however, that 60% of the OAS’ budget comes from the United States, which is a heavily influence force in the organization. CEPR notes that “[n]either the OAS mission nor any other party has demonstrated that there were widespread or systematic irregularities in the elections of October 20, 2019,” and that “[n]either the quick [vote] count nor the official [vote] count exhibit significant changes in voting trends in the final results; rather, the same well-known trend, explainable by differences in voter preferences in different geographical areas, is evident in both counts.”

The report explains – among other details – that the difference between the quick count (the unofficial count used primarily for the media and to inform the public) and the official count favoring the MAS is also consistent with the results of the legislative elections; due to technological constraints, the last votes to come in are often from predominantly poor, rural that tend to favor Morales and his party. Furthermore, over a week before the election, Bolivia’s election authority (the Tribunal Supremo Electoral or TSE) had pledged to publicize the preliminary quick count (unofficial) results with 80% of the votes in. When the verification of tally sheets was temporarily suspended on the night of the election, 83.5% percent of the votes had been counted. That “the gap between Morales and Mesa widened steadily as the counting process advanced … was a predictable and unsurprising phenomenon that need not have surprised the OAS mission,” the report states.

Despite the facts, violence led by the right-wing and fueled by the OAS statement spread across the country. On November 10, in an effort to quell the violence, Morales announced that new elections would take place. But the right-wing mobs – and the military – were unsatisfied. Violence in the streets continued as Williams Kaliman Romero, General of the Bolivian Army, released a video calling on Evo to resign. Later that day, Morales renounced his post “for the stability and the economic stability and the unity of all of the Bolivian family,” begging the opposition to stop their attacks on the people of Bolivia and on social and political movements. Within days, Morales was on a plane seeking asylum in Mexico, followed by his vice-president, Álvaro García Linera.

The sentiment behind the recent events can be summarized by a tweet from the then-Senator Jeanine Áñez, who declared herself president (despite a lack of quorum in parliament during the vote, as members of MAS stayed home for fear of their safety).“I dream of a Bolivia free from Satanic indigenous rituals. The city is not for Indians. They should leave for the highlands!!” The tweet may be from 2013, but the sentiment has hardly changed.

Caption: Tweet from then-Senator Jeanine Áñez, who recently declared herself President of Bolivia.

Since then, the Bolivian parliament has met again – this time with quorum – to vote Mónica Eva Copa (MAS) as the president of the Senate. According to the Bolivian constitution, this means that Copa – not Áñez – should be the country’s president. However, neither Áñez nor the faction supporting the supporting the coup have recognized that Copa – not Áñez – should be designated as the country’s president.

The suspected motives of the coup are many. Bolivia is home to up to 70% of the world’s lithium (a key component for the batteries of electric cars and other electronics, whose demand is expected to more than double by 2025), among other resources. It is also a remnant from the era of the “Pink Tide” – a wave of left-leaning governments in Latin America from the 1990s to early 2000s that dared to confront the unabated interests of transnational corporations and imperialist governments – a lonely island among a series of what today range from neofascist to dedicated neoliberal governments, from Brazil to Chile to Argentina.

Since Morales’ election in 2006, the country has experienced consistent economic growth (a sharp contrast to the stagnant quarter century that preceded him). During this time, the per capita GDP has increased at double the rate of Latin America and the Caribbean – a trend that has continued as an anomaly in the region, which has otherwise experienced an overall economic downturn in in recent years. Among the Morales administration’s legacies have been distancing the country from the grip of the International Monetary Fund (IMF) and nationalizing the country’s hydrocarbon supply, using the wealth to improve the general well-being of the Bolivian people. At the UN General Assembly this year, Morales announced some of these achievements since he first took office in 2006: achieving a 100% literacy rate, increasing the life expectancy by 9 years, developing a system of universal health care, and decreasing the poverty rate from 38.2% to 15.2%. In addition, extreme poverty has decreased to 15.2% (from 27.7% in 2006).

Bolivia’s success story – both in its economic indicators and measures of the general wellbeing of its population – provides an uncomfortable counterpoint to the neoliberal narrative and policy slate of its neighbors, whose citizens have suffered as a result. To overthrow the Morales administration is to dent the regional struggle for sovereignty, a domino in the U.S.’ quest for geopolitical control.

Trump said as much in a recent statement, linking the Morales administration to Venezuela, which he (and his predecessors) have sought to undermine since the inauguration of Chávez in 1999: “[the events in Bolivia] send a strong signal to the illegitimate regimes in Venezuela and Nicaragua that democracy and the will of the people will always prevail. We are now one step closer to a completely democratic, prosperous, and free Western Hemisphere.” Trump’s link between Bolivia, Venezuela and Nicaragua – an expansion of the so-called “troika of tyranny” – unveils a key driver of the U.S. support behind the coup as it seeks to undermine the strongholds against the regional neoliberal imperialist advance.

Back in McGovern’s office, with over a dozen activists crowded around the phone, McGovern (who had been advised about the delegation earlier that day), read out the tweet that he would send out momentarily:

I'm deeply worried about the #HumanRights of Bolivians, including their right to peacefully protest. A peaceful transfer of power after elections is a cornerstone of democracy — the time for military coups, in Latin America or elsewhere, is over.

Upon being asked to sponsor a resolution in Congress, McGovern responded that he would follow up with his colleagues in the Capitol and discuss next steps: “We have to figure out what’s happening before I figure out what the next step is, but for the time being, I’m with you. Let’s go on record saying this is wrong, this undercuts democracy. We cannot be quiet in the face of what appears like a coup. We all need to recommit to these principles of justice and non-violence and standing with the poor. That’s what Evo Morales attempted to do.”

Outside, the group gathered to announce the news of McGovern’s support. The message to condemn the coup pierced the cold November air as activists chanted “the people united will never be defeated!”

Next week, the group will address Senator Elizabeth Warren ahead of Tuesday’s presidential debates. Warren has so far remained silent on the coup.

Celina della Croce is a coordinator at Tricontinental: Institute for Social Research as well as an organizer, activist, and advocate for social justice. Photo Caption: Activists gather outside of Congressman McGovern’s office to condemn the coup and to announce the Congressman’s support. Credit: Gabriella della Croce. Celina wrote about Northampton residents resisting US intervention for The Shoestring in February.