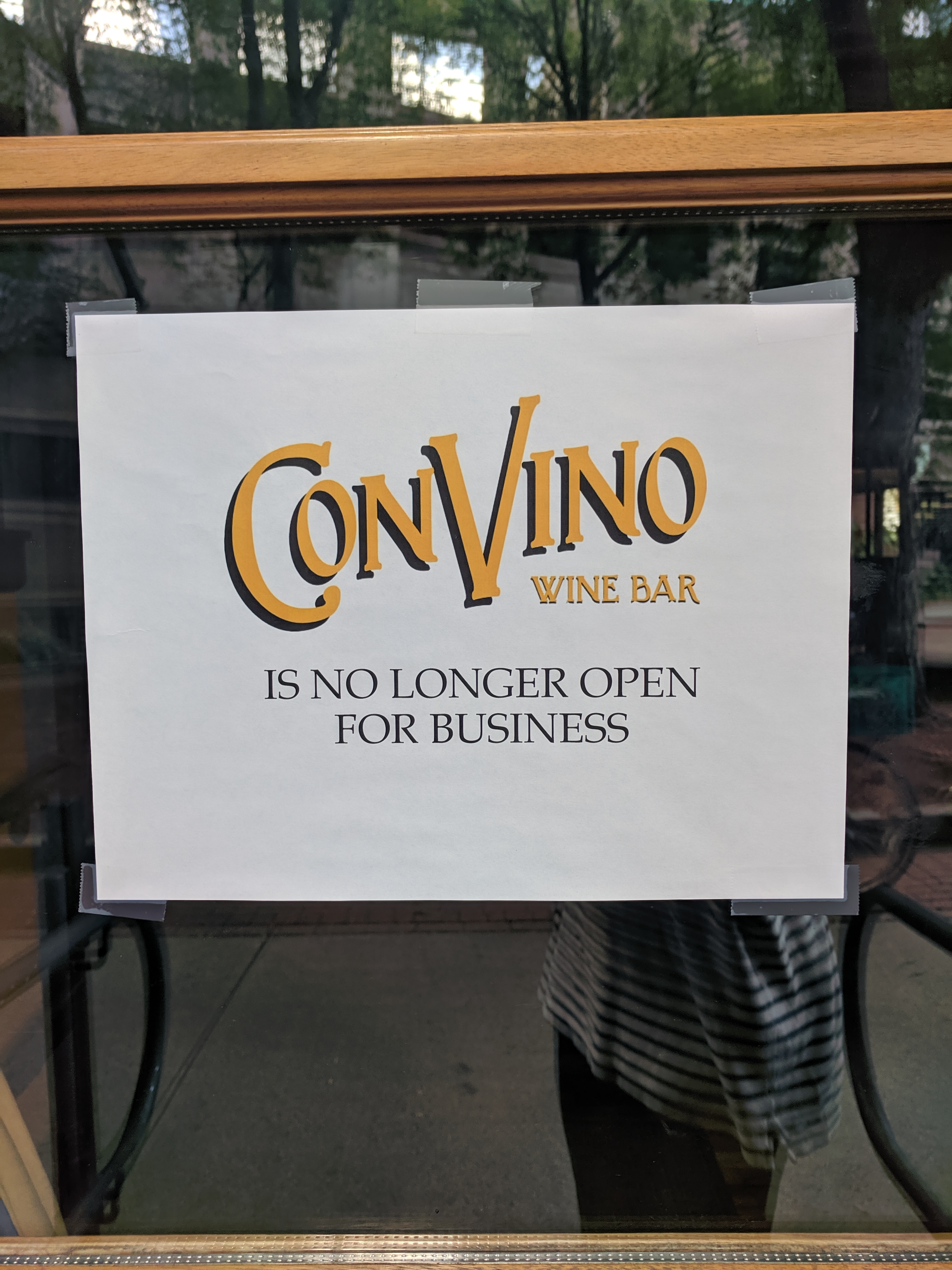 How small business owners in Northampton are misplacing blame as they’re forced to close their stores.

September 8, 2019
On August 8th, the Daily Hampshire Gazette published its third article in just over two weeks on yet another Northampton business closing its doors. Unlike the fairly straight forward articles regarding La Fiorentina and Viva Fresh Pasta, ConVino Wine Bar in Thornes Marketplace announced its closure without shying away from blame. Though the business was less than five years old, ConVino owner Caroline McDaniel had a lot to say about how the town has gone downhill since she first opened the wine bar, which touted “snacks” such as a $16 Steak Tartare and $6 rosemary oil “Fancy Fries” as well as a Pinot Noir priced at $65 for a half bottle.

McDaniel, whose last Northampton business (CMcD’s Cafe) also only lasted a few years in the 1980s, placed the blame for her second now shuttered business venture on the rise of houselessness and legal marijuana sales. As the Gazette article points out, meals tax revenue has gone up since NETA opened its doors, but McDaniel points to a supposed monopolization of parking by dispensary patrons leaving nowhere for her customers to park and therefore driving them away. Aside from the fact that NETA is about a 13 minute walk from Thornes and has its own massive parking lot, Northampton has been a tourist town for a long time for reasons having nothing to do with cannabis. With dispensaries in Easthampton and Amherst equally available, it’s hard to make the argument that a rise in out-of-towners would drastically increase traffic any more than the return of Smith students, local music, or Pride season. However, in her complaints about what has driven away her revenue, McDaniel makes two conflicting points: the first being that too many people are coming into town, taking parking, and buying weed instead of wine and tapas, and the second being that the houseless community in Northampton is driving away tourists and locals who otherwise would buy wine and tapas. Simultaneously there are too many people and not enough. While McDaniel makes clear that she would like to move the houseless out of her line of sight while offering no clear solutions, stating that people are worried about walking down the street with their children now because of “panhandlers” (something which a casual walk down Main Street on a sunny day would immediately disprove), the truth is that both ConVino and the rise in houselessness are indicative of the exponential rise in gentrification that Northampton has seen even just in the past 20 years. As rent has gone up for both apartments and businesses (something McDaniel does not attribute to the end of ConVino), storefronts catering to a wealthier crowd have replaced old favorites – like a wine bar taking over a space which was once a record store – and more working class people have been displaced by insufficient availability of affordable housing, a job market focused heavily on small-staffed higher entry “artisanal” business, and the heavy hand of landowners like Eric Suher.

In February 2018, the Shoestring covered a meeting between local small business owners and the statewide Retail Task force. In this meeting, complaints were raised about online retailers like Amazon not being required to pay sales tax and therefore being able to price items lower than they would be priced in a brick and mortar store. In response to this very reasonable gripe, task force member Jon Hurst “dashed hopes with great bluntness when he said: ‘We’ve been trying for two decades to get these online guys to pay sales tax and it’s not happening.’” Since this meeting sixteen months ago, there have been no further regulations or tax requirements placed on internet competitors – something which has less effect on restaurant establishments like the ones referenced at the beginning of this article, but greatly impacts a variety of other stores operating on a small scale. But at this same meeting, business people such as Judy Herrell (Herrell’s Ice Cream & Bakery) and Dave Ratner (Dave’s Pet & Soda) blamed the push for higher minimum wage, overtime pay, and paid sick leave for making their businesses unsustainable. This rhetoric in particular has been repeated most commonly by the Pioneer Valley’s petit bourgeoisie even after the recent owner-friendly introduction of the Grand Bargain. But this argument only makes sense if you ignore the extent of Northampton’s working class population. In 2017, the census ranked Massachusetts as the eighth richest state, with a poverty rate of 11.1%. In comparison, Northampton in 2017 had a poverty rate higher than that of the overall state at 15%. Even with the rise of minimum wage (currently $12/hour and slated to go up to $12.75 on January 1st, 2020), there is great disparity between the customers business owners desire, and the population they actually serve. Northampton in 2019 is a town made up primarily of independent retailers who price their items at a higher rate than your average chain, either due to using local and/or higher quality materials or artisan craftsmanship, creating a sort of boutique economy. However, where money is spent on materials, it is not spent on labor. A large number of small businesses in Northampton rely on refusal to give raises, understaffing and often pure wage theft to be able to keep their operations running, and balk at workers’ rights movements statewide because they threaten the model which sustains them. But the workers being paid the bare minimum also constitute a large segment of the town’s population – because their bosses won’t invest in them, it is physically impossible for them to invest in these same small businesses, and the city itself by association. The only way to ensure the longevity of a business whose product is expensive is to have a secured and substantial customer base who are able to pay for that product on a regular basis. This is the contradiction between Northampton’s promoted public image (helped by the wealthy stature and central nature of Smith College) and Northampton’s truth, where hundreds sit below the poverty line and work in places which do not value them enough to pay a livable wage which would make them viable customers.

In her cry for marijuana tax to go to a vague removal of the houseless from the streets, McDaniel echoes initiatives like the Mayor’s private and unaccountable “Panhandling Work Group”, designed more for the comfort of business owners and the wealthy than the wellbeing of the community or local economy. The truth is that ConVino is likely yet another casualty of Northampton getting too big for its britches, opening yet another niche business encouraging an image of wealth which ignores the needs or wallets of the working class and disenfranchised in the hopes that eventually they will disappear altogether and the idyllic college gay town it promotes itself as will finally be a reality. It is this concept which encourages the endless cycle of unsustainable business models which eventually price themselves out. Northampton has become a town of more and more empty storefronts and more and more people who can’t afford a roof over their heads, and the issue is neither weed nor panhandling – it’s pure ego.