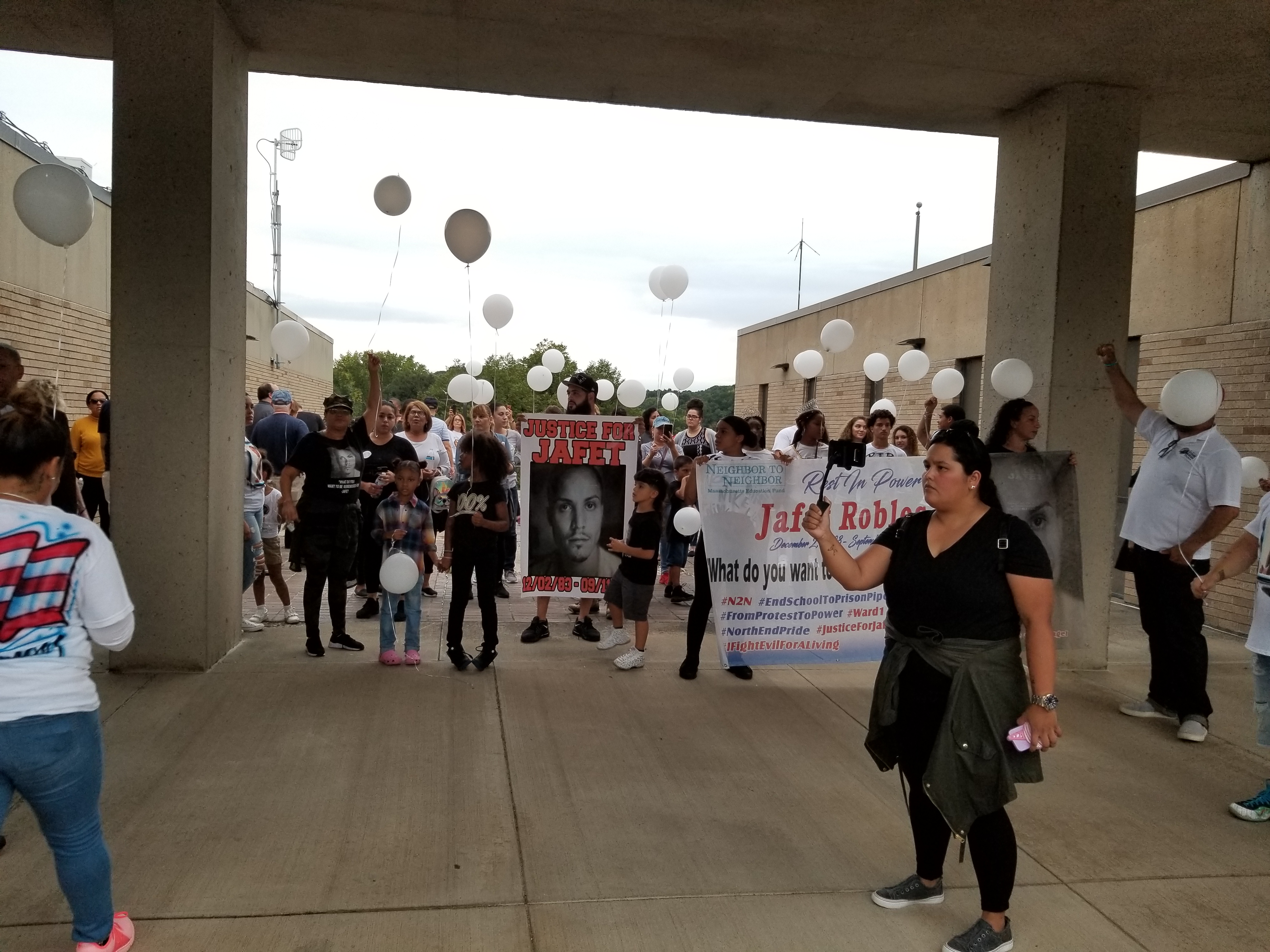 It has been a year since Jafet Robles’ body was found by a town parks employee at Szot Park in southern Chicopee. Robles had gone missing the night before, after leaving a recording session that he was participating in with his friends, earlier in the evening. As the uncertainty of his whereabouts that night grew, Adam Gomez, currently a Springfield city councilor and close friend of Robles, came to search for him only to find Robles’ car, with the doors left wide open and his hat, phones, and keys on the ground. No calls were made to the police that night, though a report was later made by some neighbors of hearing three gunshots that were thought to have been fireworks.

A formerly incarcerated Puerto-Rican and father of four children, Robles’ own journey revealed the precarious waters that many people of color in Springfield like him must often tread. His time in juvenile detention from ages 19-22, due to a charge for conspiracy to distribute heroin, sparked his unwavering commitment to organize for criminal justice reform. After being released, he struggled to find work, and ultimately ended up working in home improvement until he got involved with Neighbor to Neighbor, a grassroots social justice organization. In Springfield, Robles was doing the often-difficult grassroots work of building people power to fight against mandatory minimums and criminalizing policies that impact all working-class communities of color in Springfield. At the state level, he frequently traveled to Boston to advocate for Massachusetts to pass the Justice Reinvestment Bill, which would later be signed by Governor Baker after Robles’ passing. In 2016, Robles and a group of community leaders in Springfield traveled to D.C. for the Million Man March to demand criminal justice reform nationwide.

During an interview, Gomez recalled the legacy that Robles left in his community and beyond. He pointed out how clear and direct Robles’ organizing was. “He got arrested in front of the White House after Trump’s 100th day in office and was part of a group that took over several buildings near it,” Gomez said. According to Gomez, Robles strove to be a part of actions that sought to concretely disrupt power.

“Jafet gave 110% to everything he did, and he lived everyday so fully, always starting it with a vanilla chai,” Gomez said as he laughed. In many ways, it was Robles who got Gomez more involved in community organizing in their neighborhood in the North End of Springfield and, ultimately, influenced his decision to run for Ward 1 City Councilor. While remembering a photograph that was taken of the two of them on the day of Gomez’s city council victory, both of them standing with their fists raised up, it was difficult to overlook the mixture of both happiness and a deep sense of loss that the photograph brought him. “That day was a good day,” Gomez said. “You know, it took me a while to get involved in the work Jafet was doing. He would ask me to go to the Neighbor to Neighbor meetings, and for a while I resisted, but it was inevitable…his intensity to do the work was contagious,” Gomez recalled. Robles and Gomez both grew up in the same neighborhood in the North End of Springfield, and in many ways were both victims of the mandatory minimums that Jafet organized fiercely against. This is how Gomez would be introduced to grassroots organizing. But Robles didn’t just get Gomez involved in criminal justice reform. “Pretty soon, we were organizing for gun control, immigration [justice], and [against] wage theft; his commitment to building bridges and standing firmly for justice was clear.”

While Robles was part of the struggle for justice for many years, he was only an organizer by profession for the last three years of his life. After organizing with Neighbor to Neighbor as a volunteer for some time, he was hired as a staff organizer when he was 30, where he would remain until he passed at 33. The amount of change he was able to bring to his community in such a short period of time will always make those who were closest to him wonder how much he would have been able to achieve if he had more time. For Gomez, his friend’s ability to have been one of the leaders of the movement for justice was unquestionable. “It’s hard to imagine how much potential he had when he was able to achieve that much in just three years…but I like to think that this is also the reason why his legacy will live on in my work and in the community, because everything that Jafet touched has come to fruition.”

A year later, we can still see the legacy of the effective organizing that Robles did to spark important conversations on issues that universally impact people of color in Springfield. On the night of September 10th, Springfield City Council passed a wage theft ordinance that would protect contracted workers hired under municipal contracts, and require contractors to hire a stronger percentage of women and people of color to complete municipal projects. While the vote had initially been vetoed by Springfield Mayor Domenic Sarno, a coalition of grassroots organizations and unions came together to ensure that the second round of voting be veto-proof, with nine secured votes from city councilors. Among the grassroots organizations and unions that supported it was Neighbor to Neighbor. Before casting his “yay” vote during roll call, Gomez paused to say “Justice for Jafet.”

On September 11th, Robles’ family and friends organized a two-mile march to mark a year since his passing and demand justice to his murder. The march began in Szot Park, where his body was found, and ended at the Chicopee Police Station. About 250 people gathered to remember him, many of them wearing custom designed shirts and hats with Robles’ picture and the phrases like, “Justice for Jafet,” or “Life is too short,” his most well-known quote, written beneath it. Most people held white balloons throughout the entirety of the march. As people walked, a well-curated playlist of salsa, hip-hop, and R&B was played and led the crowd. At the police station, a few of Robles’ closest friends and mentors, including Gomez, expressed their grief and anger for the lack of responsiveness from the Chicopee Police Department and Hampden County District Attorney regarding the unsolved murder.

It would be an understatement to say that the progress that the Chicopee and Springfield Police have made in the past year since Robles’ murder has fallen short. No leads have been made on suspects or further information on the situation that led to his murder. The complete inaction from the police department was confirmed on September 10th, the day before the one year anniversary of Robles’ death, when Hampden district Attorney Anthony Gullini’s office released blurry pictures of a an unidentified “2000’s GMC Envoy SUV, that is a light metallic color, such as silver, gold, tan, champagne, or something similar” driving around the area where Robles’ was killed—hardly a concrete lead.

“If this was a young white girl or young white boy murder this would have been solved earlier. If this was a young man from Chicopee, they would have put more resources into the case, but because this is a young man from Springfield, they really don’t care—let Springfield deal with it,” Vernon stated. People in the crowd applauded and affirmed his remark. “We see it every day, young black men and young Latino men being murdered on the street, and nothing being done about it,” Vernon said.

When The Shoestring asked the Hampden County District Attorney’s office for comment on the community response to the timing of the release of the evidence, the response was agitated and defensive. “You need to calm down so I can answer you,” said James Leydon, a public information officer and former aide of Springfield Mayor Domenic Sarno after asking for clarification as to why comment was needed. “The Massachusetts State Police unit assigned to Mr. Robles’ case released information that they deemed was appropriate for the public to be informed of given where the investigation is at,” he concluded.

“This has been investigated to the best of our abilities with the State Police and ourselves. It doesn’t matter where anybody is from, a human being was murdered. People who say otherwise don’t know our department,” said public information officer Michael Wilk of the Chicopee Police Department. He said the department could not comment on the DA’s decision to release the photo evidence the day before the one year anniversary of Robles’ murder.

But beyond the demand for greater efforts to investigate the case, the message of the speakers was clear—the time for the community to get together and organize around the issues that Robles fought for is now. Certainly, nothing short of that would be what Robles would have wanted. Gomez, Vernon and Yolanda Cancel, another close friend of his, spoke candidly about what Robles would think about the  tensions that arose among community leaders and Democratic-leaning groups in Springfield after the midterm primaries earlier this month. “You and I have got to stop the bickering between one another. Jafet is crying from the grave for you and me to get up and do something. We’ve all got to get involved.” The call for action was not just for the issues that the community was struggling with for the here and now, but for future generations of children of color in Springfield and the southern Valley that run the risk of falling victim to the same violent systemic forces that continue to lead to mass incarceration, police brutality, racial profiling, and systemic inequality. “The world will swallow our children whole and spit them out if we don’t all get out and start doing something about it,” Vernon concluded, as he pointed to the faces of black and brown children that sat and intently listened in the front of the crowd.

The march ended back in Szot Park, with a rush to make it back before the sun fully set to do a final collective action to commemorate Robles and the first year that had passed without him. All at once, the crowd released the white balloons they had been carrying throughout the entirety of the march. Some people screamed “I love you!” as they cast out their balloons, while others quietly looked at the scene, choosing to hold the thoughts they had for their friend in silence.

Andrea Schmid is a Holyoke resident and community organizer for the Pioneer Valley Workers Center. Video by Justin Hellepolei.