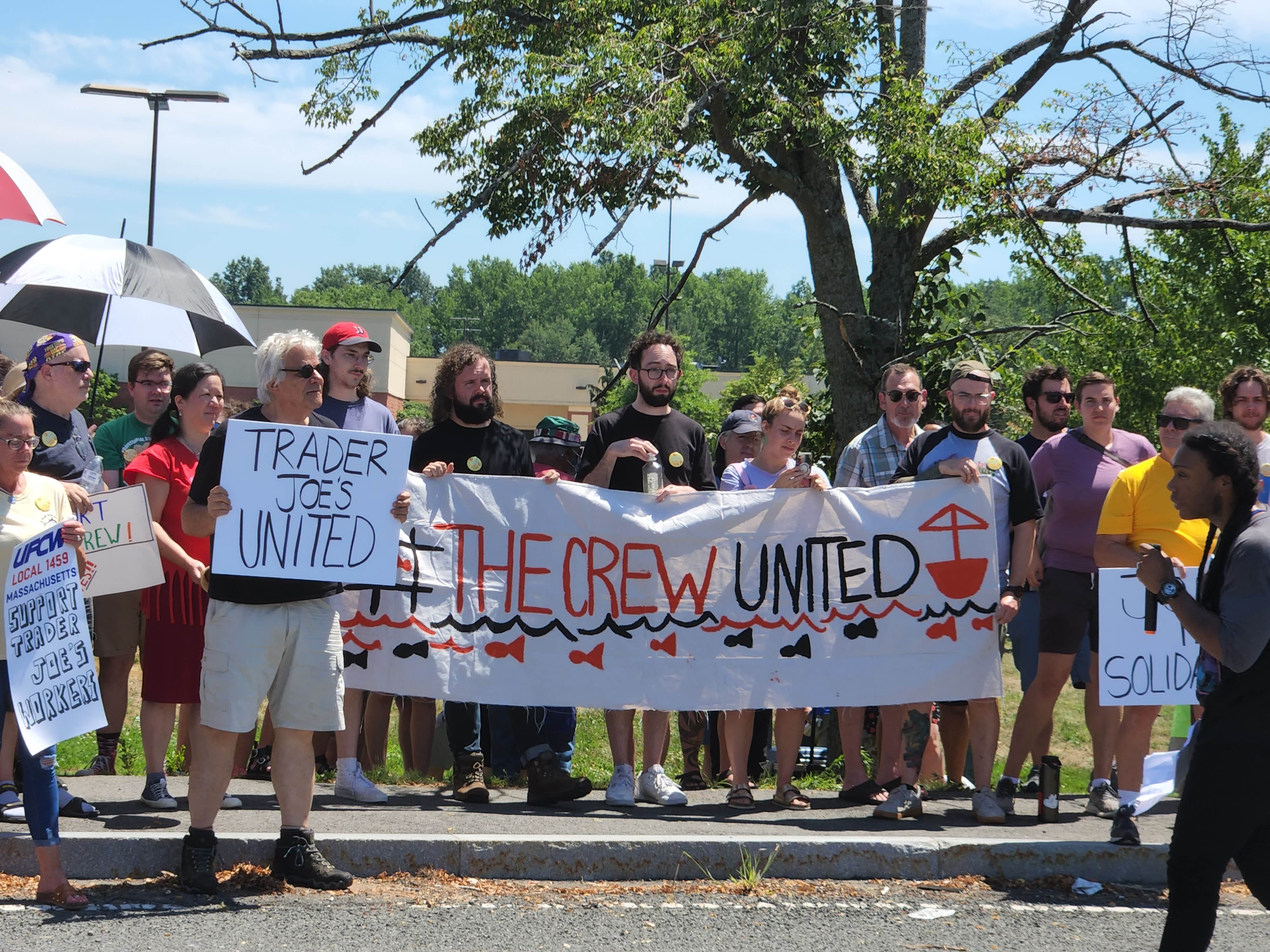 On Saturday, July 23rd, Trader Joe’s United (TJU), the newly formed independent union of workers at the Trader Joe’s in Hadley, MA, held a rally outside the store in support of their upcoming union election which will take place on July 27th and July 28th. The rally drew over 100 supporters who gathered on the sidewalk facing Route 9 in sweltering summer heat, holding signs and participating in chants as they listened to the testimony of rank and file Trader Joe’s workers and other Western Massachusetts union members, including United Food and Commercial Workers 1459 (UFCW), the UMass Professional Staff Union (PSU) and the newly formed Amherst Cinema Workers United (ACWU). Massachusetts Rep. Jim McGovern also shared his support for TJU’s unionization efforts as the crowd cheered him on.

Trader Joe’s crew member Jamie Edwards introduced speakers to the crowd and quipped, ”We heard there would be an anti-rally. Apparently it is down the street and only two people are there. By this time next week we will be the first unionized Trader Joe’s location!”

Sarah Yosef, a TJ crew member, told the crowd that she has worked at Trader Joe’s for over a decade, at stores in two states, and has had every position in the company. “I found myself having to deliver changes that supported the company’s bottom line instead of the welfare of the crew,” she said. “After the Affordable Care Act was passed, I was tasked with sitting down with crew members to literally take their health insurance away. Management said that the ACA insurance would be as good as the insurance Trader Joe’s offered. But it wasn’t. That event had a profound effect on me in supporting my decision to unionize today.” She added, “By unionizing, we come together to take care of each other in a really different way than what has been happening in the company. We can improve our workplace, we can have a voice in the decisions that affect our bottom line. I look forward to being an equal with the company that will create a contract that will protect us as workers.”

Prior to the rally, The Shoestring spoke with Maeg Yosef, a crew member at the Hadley location for 18 years, who told The Shoestring that there had been an effort to unionize prior to the pandemic that she had not even been aware of at the time, but that during the pandemic organizers were able to reach workers from all shifts and build trust between all crew members. She said that although management has been very actively union busting, crew members were prepared to counter their predictable and classic union busting tactics.

Woody, also a TJ crew member told the crowd, “Management has ‘drip, drip, drip’ been taking away our benefits for a long time. So we needed to do something and here we are doing something, so thank you for your support.”

Amherst Cinema Workers United (ACWU) members who just had their first bargaining session told the crowd about their struggle to unionize and shared their support for TJU. Kiah, a founding member of ACWU, said, “Being front-of-house workers during the pandemic, we drafted a letter of issues we were having and sent it to management. We didn’t get much of a response, so we decided to form an independent union.”

Iris, a steward for UFCW 1459 at River Valley Co-op, which has 150 rank and file members across its Northampton and Easthampton locations, told TJU, “ Your struggle is our struggle. You will give hope to the other 556 Trader Joe’s locations, you will have made the impossible possible!”

Jim McGovern spoke last, telling the crowd, “This is one of the most beautiful sights I have ever seen. I can’t remember the last time I have seen so many trouble makers in one location. To the workers at this store, thank you for your courage and your guts. You deserve respect and recognition that management gets. This is what solidarity looks like.”

The Shoestring asked people in the crowd why they came out to support TJU.

Amy Callendrella who operates machines for Local 98 Operating Engineers said, “I was thinking about that this week, I like being with people that are fighting back because there is a massive fight going on, and you don’t get to be a part of the ‘fighting back’ all of the time, so I wanted to come out here on a Saturday to be a part of this fight.”

Parker Chandler of IBEW Local 7 said, “I’m wearing a Local 7 Springfield shirt and looking to support any other brothers and sisters that want to organize, knowing that if we need support in our union, we have to show support for others.” Ethan Lucy, also from IBEW Local 7, said, “I am just really excited to see people  organizing and actually making their workplaces better and I hope to see more people follow in the footsteps of Trader Joe’s workers.”

Pete White, vice president of the Pittsfield City Council and a steward at the Service Employees International Union 509 (SEIU), said, “I’m here to support Trader Joe’s workers because whenever we unionize, we make everyone stronger. We need workers’ rights, we need to be together. We need to make sure we are on an equal level, an equal playing field, and to make sure that union workers and any workers are not walked on. We need to make sure we can have the right wages, right benefits, right time off, and to be safe at work.”

Hoang Phan, an organizing coordinator for River Valley DSA said, “It’s important for me and for DSA to be here because nationally there is a surge in militant labor rank and file activity, of grassroots organizing, led by rank and file members. We want to help advance that.”

Patrick Burke, president of UAW 2322 and executive Vice President of Western Mass Area Labor Federation said, “It is really exciting and important that workers at places like Trader Joe’s are standing up. As president of UAW 2332 which represents grad workers, post grad workers at UMass Amherst, and early childcare workers across Western Mass, it’s part of the same wave we have to organize and to win better contracts. This is another touchstone in people realizing that they have rights at work and that unions are a vehicle to transform their workplace and their communities and broader society.”

Clare Hammonds, a professor of practice at the UMass Labor Center said, “This is another example where we are seeing national chains having emerging unionization drives. We have seen this at Starbucks, we have seen this at Amazon, and yesterday a LuLuLemon store filed for their first election in Maryland. I am very excited to see and have this happen locally, to see workers come together to exercise their voice in the workplace.”

The union election will take place on Wednesday, July 27th, and Thursday, July 28th, when 81 workers will be allowed to vote. Following Hadley’s example, a Trader Joe’s store in Minneapolis has organized and will hold its union election in early August.

At the rally, The Shoestring spoke to Skyler Lloyd, a Trader Joe’s crew member of three and a half years, who said, “We felt the community support the whole way through but it’s great to see everyone in person and have a way for people to come show that support.” When asked if he is feeling optimistic about the election results, he said, “I definitely am. We are just the first store to have a vote and there will be more to come, and I am excited for every step along that route.”

As the rally closed Jamie Edwards led the crowd in a chant directed at Trader Joe’s CEO Dan Bane, “When we are exploited we multiply!  Listen Dan Bane, hear our cry!”

Blair Gimma is a co-editor of The Shoestring and an inside wireman in IBEW Local 7.