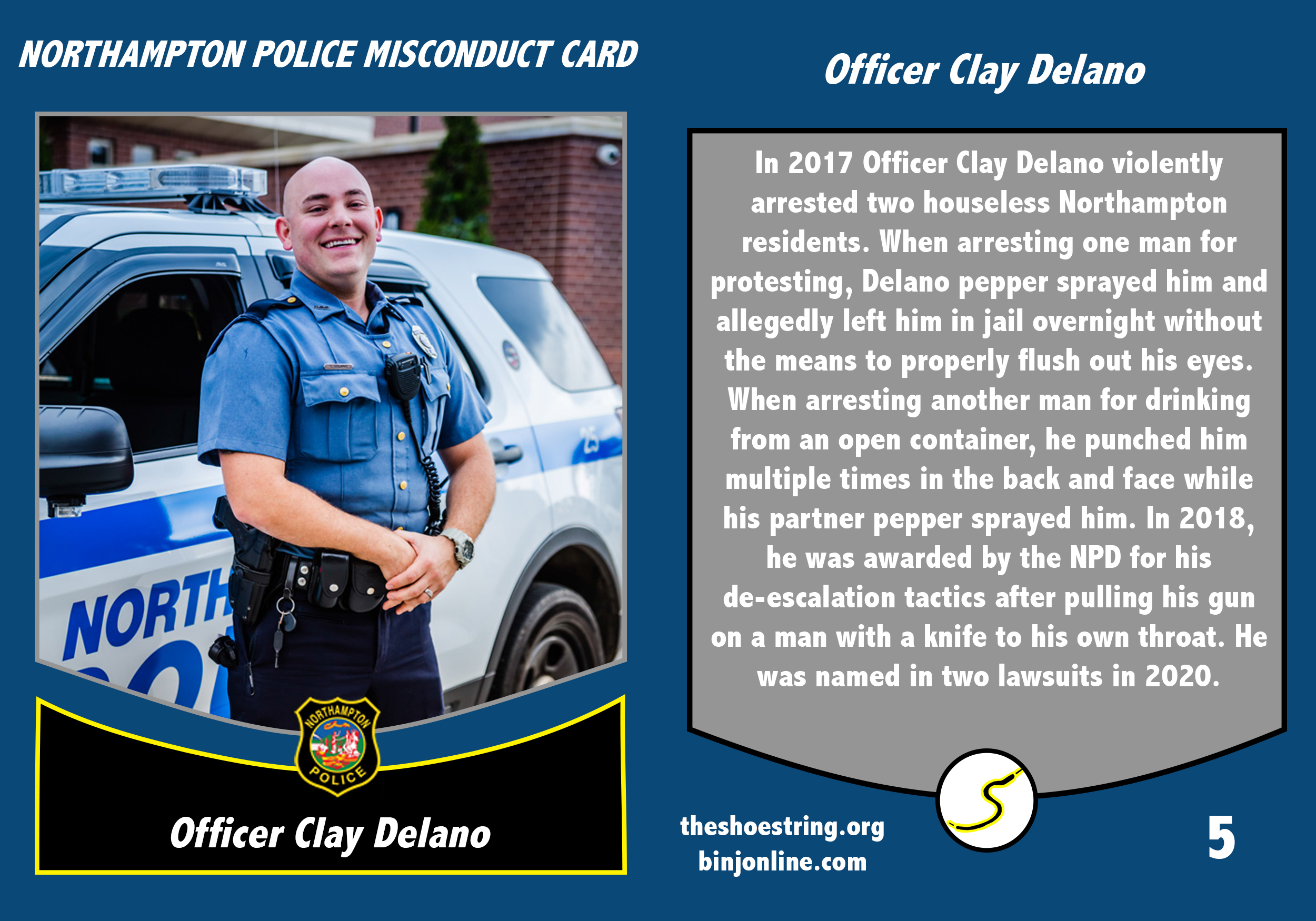 An officer awarded by NPD for de-escalation has a history of violently arresting houseless Northampton residents for nonviolent activity.

In 2017, the Northampton Police Department received a grant from the retailer Wal-Mart to produce baseball style trading cards to be handed out to school children in the city. Kids who successfully collected all 50 cards were given a ride to school in a police cruiser. In response, The Shoestring is creating Northampton Police Misconduct Trading Cards. This is the fifth in the series. For #1 Robert Powers, click here. For #2, Alan Borowski, click here. For #3 Thomas Briotta, click here. And #4 Andrew Kohl, click here.

In April 2019, MassLive reported a heartwarming story in which six officers and a “comfort dog” were sworn in to the police force and several officers were awarded for having “taken life-saving measures and responded to difficult situations in the community over the last year.” At this event, officer Clay Delano received an award for “deescalat[ing]” a situation in which a man in Pulaski Park “held a knife to his [own] throat and told officers to shoot him,” after it came to light that there may be multiple warrants out for the man’s arrest.

How did Delano and the other officers on the scene de-escalate this situation? According to the police reports as quoted in the Gazette, Delano drew his gun, pointing it at the man, and told him “that his life was not worth ending over three warrants.” Then, a fellow officer “arrived on scene with a 40 mm less-lethal launcher and pointed it at [the man] who then threw the knife away and dropped to the ground.”

To say this is a generous use of the word de-escalation is an understatement: Delano quite literally brought a gun to a knife fight. In doing so, he and the other officers escalated the situation from the possibility of a self-inflicted knife wound to the very real threat of being shot and possibly killed by one or more police officers.

Police chief Jody Kasper, for her part, said that “In the case of Tuesday, when you have a distraught individual who pulls a knife out in a park full of people, next to buildings full of people – we really don’t know how it is going to escalate from there.” Well, escalate it did, with multiple firearms drawn on a distressed man threatening harm to no one but himself.

Clay Delano is also one of the officers who violently arrested Eric Matlock for protesting on the steps of City Hall in 2017. This arrest and the bad publicity it garnered led to a “program of targeted harassment of [Matlock] and his family,” according to Matlock’s lawsuit against Delano and the other officers involved. We describe the harassment that followed Matlock’s arrest in our previous NPD misconduct trading card, but here we’ll take a closer look at Delano’s role in the initial arrest and the events that followed.

Matlock’s lawsuit states that, in an effort to stop him from protesting on the steps of City Hall, officers Delano and Dzialo “grabbed him, lifted him, and began carrying [him] down the steps.” Then “Dzialo sprayed [Matlock] multiple times with pepper spray,” while both officers “grabbed [Matlock] by the hair, pulling back his head so as to continue spraying him at closer range and more directly in the face.” In the video taken by a witness, you can hear multiple people crying out at the officers to stop harming Matlock. The lawsuit states that when an officer later took statements from four witnesses to the arrest, they “all told him that [Matlock] had done nothing wrong,” and “indicated that in their opinion […] Dzialo and Delano had behaved inappropriately by attacking and then arresting a peaceful protester.” Furthermore, it says that while “Delano and Dzialo reported and later testified that [Matlock] had unexpectedly assaulted them while they were talking to him about his protest,” all witnesses stated that the officers were the first to make physical contact with Matlock.

After arriving at the police station, Matlock alleged, “the decontamination station was not working properly,” and he “was unable to flush his eyes effectively.” According to the lawsuit, both officers finished their written reports of the arrest more than two hours before the Northampton District Court closed, but instead of bringing Matlock in for arraignment, they kept him overnight, and “because he was not given access to a working decontamination station, [Matlock] experienced extreme and prolonged pain from the pepper spray during that time.” The lawsuit alleges that this delay was intentional, “to prolong his physical pain,” and that Delano and the other officers involved targeted Matlock “in part or in whole because he is of African American and indigenous descent,” denying him the equal protection of the law.

Matlock was later found not guilty of all charges.

Clay Delano is also one of the officers accused of intimidation, defamation, and violation of First Amendment rights in a 2020 lawsuit from Benjamin Maddison. Maddison accused Delano and fellow officer Andrew Kohl of “looking for a crime” that they could charge Maddison with, due to the officers’ alleged annoyance at being filmed by Maddison on public property. This is not the first case of Maddison accusing officers of targeting him in retaliation for his “self-described ‘cop-watching.’” We describe the lawsuit against Delano and Kohl and the circumstances surrounding it in more detail here.

In 2017, Delano and officer Jeffrey Staples came across a houseless man sleeping in a hammock near the bike path, “yelled to wake him up,” and ordered him to move his things out of the area. According to Delano’s report, the man was in possession of an open beer bottle, and “was further advised [by Delano] that there was a city ordinance against open containers of alcohol on city property, at which point he stood up from the hammock, picked up the beer and began drinking it while looking at us.”

After this small act of defiance, Delano and Staples told the man he was being placed under arrest, according to the officers’ reports. The man allegedly attempted to escape and was stopped by Delano and Staples. Staples pepper sprayed him while attempting to cuff him. Meanwhile Delano hit him with “distraction punches,” (whatever that means). When the man reached for his pocket, Delano reportedly punched him in the face three times. All to arrest a man who had been doing nothing but sleeping peacefully in his hammock until the officers awoke him.

Molly Keller is a new contributor to The Shoestring. She is a senior at Smith College and lives in Amherst.

NPD Misconduct Trading Cards are produced in partnership with the Boston Institute for Nonprofit Journalism. The Shoestring is committed to bringing you ad-free content. We rely on readers to support our work! Please pay for The Shoestring on Patreon.