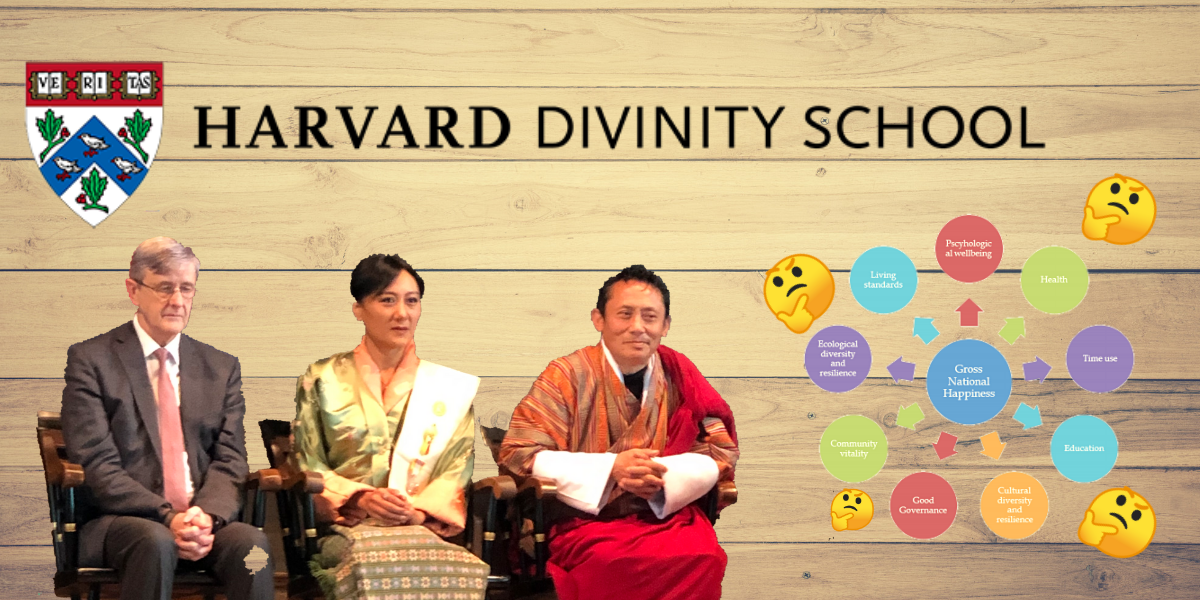 Harvard Divinity School recently hosted a conference focused on the topic of “governing for happiness” and featured Bhutan as a champion of Gross National Happiness (GNH).

The truth is in its quest to become the “happiest kingdom on earth”, the Bhutanese regime forcibly expelled over 100,000 ethnic Nepalese who were Bhutanese citizens in the late 1980s and early 1990s.

I’m one of the thousands of children affected by the forced migration. In 1980s, my father spent some months in a hideout inside a cave due to fear of being persecuted. This is because my father was a close friend to the village head who was against Bhutan’s discriminatory ‘one nation, one people policy.’ The Buddhist ruling elite coerced Nepali-ethnic citizens to adopt their culture and norms.  I walked hundreds of miles barefoot to an unknown destination, sleeping in the woods by making bed out of branches.

According to the Human Rights Watch, during this period of ethnic cleansing in the late 1990s, Bhutanese authorities targeted Hindu minorities without any search or arrest warrants. They expelled the Hindu and Christian minorities and advanced the prospects of citizens who shared the beliefs of ruling class.  They enforced a family separation policy that restricted the resettled Bhutanese all over the world, including naturalized Bhutanese US citizen from visiting their families and loved ones.

Harvard’s conference was a slap in the face to the tens of thousands of refugees—victims of Bhutan’s ethnic cleansing policy—currently living in the United States. The brutality and inhuman atrocities of the Bhutanese Government has led to a mental health crisis. There is an epidemic level of suicide among Bhutanese refugees affected by these policies.

The many Bhutanese refugees affected by these policies have had epidemic levels of suicide. According to a research published by the Center for Disease Control, family separation issue has become the primary cause of concern for a growing trend of depression and anxiety including suicidal ideation among many Bhutanese communities in the United States. Where is the happiness in that?

When asked about this history during the conference presentations, Karma Tshiteem, Chairman of the Royal Civil Service Commission and other panelists from Bhutan deliberately avoided discussion of the many Bhutanese refugees. They implied that the traumas had never happened. “Since this is a student-led conference, we will not respond to this political question,” lead organizer, Kinga Tshering responded. The audiences were shocked to hear their response. Even more shocking is the limited learning that these students have achieved.

With Harvard as a world leader in education, the actions of the University matter. A certain degree of awareness of this history as a backdrop to the current Bhutanese message of GNH is important to acknowledge and consider. There is a degree of responsibility and accountability that the university must take when in this position of power and esteem.

If the role of government is creating the right conditions for their citizens and enabling an environment where all can flourish, Bhutan is no model. Bhutan’s GNH is not for all.

Institutions that provide a platform to promote Bhutan’s marketing around GNH should learn more about the true history of Bhutan. It is important to take a hard look at the past while remaining critical and recognize the complexities of history before publicly praising a country that claims to have achieved happiness only at the unhappy expense of others.

I can’t understand Bhutan’s happiness if it does not repatriate the remaining refugees in Nepal and allows resettled Bhutanese American from entering Bhutan. The only rational solution for the family separation issue would be to provide Non-Resident Bhutanese status to the resettled Bhutanese and allow them to visit their families and friends in Bhutan.

A refugee from Bhutan and a 2017 MPA graduate from Westfield State University, Mr. Bhuwan Gautam is a former President of a refugee local non-profit, Bhutanese Society of Western Massachusetts. He can be reached at bbdruk@gmail.com.