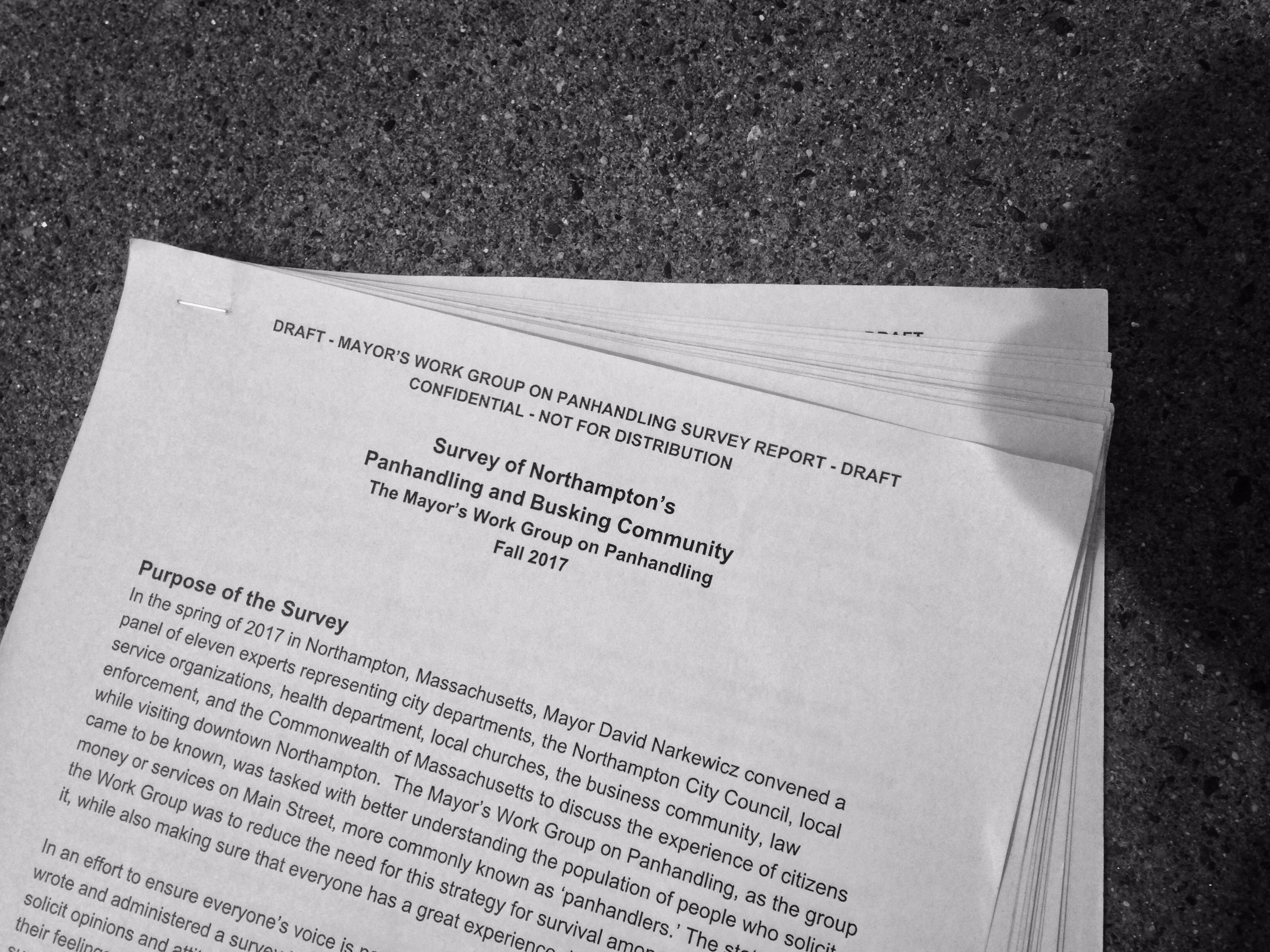 We asked houseless people what they thought of the Mayor’s confidential “survey on panhandling.”

[UPDATE: 4/12, The Mayor’s Work Group on Panhandling has issued another survey, this time aimed at ‘Northampton Residents.’ Read our story: Another day, Another Survey About ‘Panhandling’ from Progressive Mayor Narkewicz.]

In the Fall of 2017, Northampton Mayor David Narkewicz convened a “work group” to “study” panhandling—when people solicit donations on the street. The Shoestring was able to obtain a “confidential draft” of a document produced by this group. The document is called “A Survey of Northampton’s Panhandling and Busking Population.” [See the report in its entirety, here.]

“In an effort to ensure everyone’s voice is part of the conversation, the Mayor’s Work Group wrote and administered a survey to the panhandling population,” the report states in its introduction. The group, according to an email from the Mayor’s office to The Shoestring, has met ten times over the last twelve months in meetings that are closed to both the public and the houseless population. We were also informed that the Work Group originated, “following a January 2017 study on the local economy by the City Council’s Committee on Community Resources that recommended he study the issue [panhandling].”

From the start, the report explicitly states that the survey was not designed to address the needs of those who participated, but instead to address panhandling as an activity, saying: “The survey was intentionally designed to be narrow in scope in relation to panhandling activity downtown, rather than being an in-depth look at the underlying causes, effects, or levels of service adoption by panhandlers.” While the report does list the needs of those who were surveyed and inquires about services used, its focus is on reducing panhandling, not increasing or improving services, and certainly not preventing poverty.

As stated in the report, those who participated in the survey were given a $10 gift card from the Downtown Northampton Association (DNA) in exchange for their participation. The DNA and Northampton Chamber of Commerce have members on the Mayor’s Work Group. (It should be noted that DNA is affiliated with the Chamber of Commerce.) According to the Mayor, “The Mayor’s work group is comprised of representatives from ServiceNet, Tapestry Health, HampshireHOPE, Eliot Homeless Services, Hampshire County Friends of the Homeless, Downtown Northampton Association (DNA), Northampton Chamber, Northampton Police Department, and the City Council Committee on Community Resources. Peg Keller, the Mayor’s Housing & Community Development Planner, staffs and facilitates the group.”

The survey was administered by volunteers from local human service organizations, the health department, and officers from the Northampton Police Department, according to the document. It includes a wide range of questions about how this population gets downtown, what type of benefits they receive, whether or not they use substances like tobacco, marijuana, or alcohol, and how this population perceives its own effect on the downtown economy. It is unclear, however, if a survey has been conducted on Mayor Narkewicz, Chief Kasper or Chamber President Suzanne Beck’s substance habits and their effect on the downtown business climate.

In the statement from the Mayor’s office, we were informed that “the Mayor formed the group to help him study the issue of panhandling, it’s underlying causes, and potential non-legislative/non-punitive ways of addressing it and the needs of at-risk populations downtown.” However, the report itself contradicts that, saying: “The stated goal of the  Work Group was to reduce the need for this strategy of survival among those that employ it, while also making sure that everyone has a great time downtown.”

The report suggests a possible work program for panhandlers consisting of low paying manual jobs. It also suggests a possible ‘Code of Ethics’ that could “serve as a gentle reminder within and outside the community guiding a behavioral and procedural ideal to which all panhandlers could aspire.” The report continues, suggesting that this code could be enforced by both business owners and law enforcement, “Business owners and Police could point [to the code of ethics] during moments when things aren’t running smoothly.”

To our knowledge, there are no panhandlers in the Mayor’s Work Group on Panhandling.

In an effort to share this report with the people it will most affect, The Shoestring went to Main St to give the report to panhandlers and ask them what they thought about it. Here are some of the things people had to say.

In response to the secrecy of this report and the Work Group, one person we spoke to asked, “When will this Mayor call us to a meeting, to Town Hall, to hear our voices? We were not asked about this.” Another person said that they thought the Mayor did not include panhandlers in the work group because, “that would put us far too close to their vicinity.”

We asked people if they thought the Mayor should be studying panhandling. One person we spoke to objected to ‘panhandlers’ being studied as a group. “We are all different people from all different backgrounds.” She added that she took issue with the term itself, “I don’t consider myself a panhandler. What is a panhandler?” Another person said, “There is nothing Northampton can do to end panhandling.” Someone shared, “They don’t want solutions, they want [panhandling] to not be seen.” One person clarified why people panhandle, saying, “We sit for our daily profit to feed ourselves.” Another explained, “This is someone’s job and how they’re going to survive for the day.” One person we spoke to recalled watching someone participate in the survey. “I remember them coming around questioning. To me it sounded like, ‘How can we find ways to reduce presence?’ It sounded like surveillance.” Another person we spoke to commented on the survey saying, “It is a complete bullshit survey.” When told that some surveys were administered by cops, one person said, “Who’s going to tell a fucking police officer the real shit? I don’t feel safe talking to police officers.”

We asked what the Mayor could do to help them. The response was unanimous: housing. One person said they wanted to hear the Mayor say, “Here are the keys to your new apartment.” Another person said, “Housing has to come first. I have to be able to sleep in a bed, take a shower.” Another person shared why housing is so important, “Having a place to be, to be secure, to keep your things, to clean your butt everyday.” Another person added, “If you have a home, they can’t tell you to quiet down.” Another person told us how houselessness means a constant lack of privacy, and with it, constant criminalization. “It’s legal to smoke marijuana now, but not in public. So if you’re houseless and you want to smoke or drink, that’s criminalized. You can’t go to the bathroom in public, but if you don’t have access to a toilet and it’s three in the morning, you’re running the risk of being deemed a sex offender.”

One of the policies mentioned in the report is the “A Better Way” program which began in Albuquerque, New Mexico, and has since been adopted in Dallas, TX, among other cities. The program encourages people not to give money to panhandlers, but instead to organizations like the United Way. It claims that an organization can feed 20 people with $5, instead of a person using $5 to feed themselves. In response to this, one person we spoke to said, “We aren’t worried about eating. What we are worried about is housing. I can even have money, but I don’t have credit, I don’t have income.” Another person we spoke to said they would rather be given the money themselves.

The report entertains the idea of providing certain kinds of jobs to panhandlers. Some people we spoke to said they would do those jobs and that offering jobs was a step in the right direction, but remained skeptical whether jobs are the Mayor’s priority and noted that housing would still be an issue. One person remarked that such jobs would be, “another revolving door.”

Everyone we spoke to said that Northampton shelters and services are failing them. They told us that the shelters are understaffed and don’t have enough beds. “The only shelter open all year round has 12 beds. If you want a bed, you have to wait in line.” Another person told us of their experience of sleeping in 18 degree weather this winter after being turned away from a full shelter. Some people we spoke to said they felt “like a prisoner,” when they stay in the shelter because of the restrictions placed on them. They said they can’t step outside to smoke, or cook past 9pm. “They treat people like criminals.” One person said they know people who would purposely get “locked up” for the winter so that they could stay warm and eat three meals a day in the Northampton jail.

On the subject of mental health services, one person said, “If capitalism doesn’t make money, then it doesn’t make sense. It is most profitable to ‘treat’ people. The mental health ‘treatment’ is a revolving door system, people make money off of it. They get tax breaks, it is self-serving and doesn’t make any difference.” Another person added, “The combination of jail plus addicts doesn’t help anybody.”

We asked people about the ‘Code of Ethics’ mentioned in the report. We found that such a code, it seems, at least informally, already exists and is enforced. One person recalled a business owner asking her to move. She said, “They don’t have the authority to do that.” Another person said that she has been asked to, “stay on the red bricks” and off the sidewalk and to not “ask” for money, but to instead stand quietly with a sign. Another person told us that everyone knows they are not supposed to “ask” for money. Someone else told us that business owners will ask her to go move and go sit in front of someone else’s store.

According to the Mayor, the Work Group on Panhandling hopes to release a report by summer, but has “no fixed timeline or deadline.” We are not privy to the other research that may accompany this forthcoming report. For now, the Work Group operates in secret; its members create policy without extending political power to those who will be most affected. The report concludes by thanking “Northampton’s panhandlers and buskers for adding their voices to the conversation as we consider the best approach to this issue.” (emphasis ours).