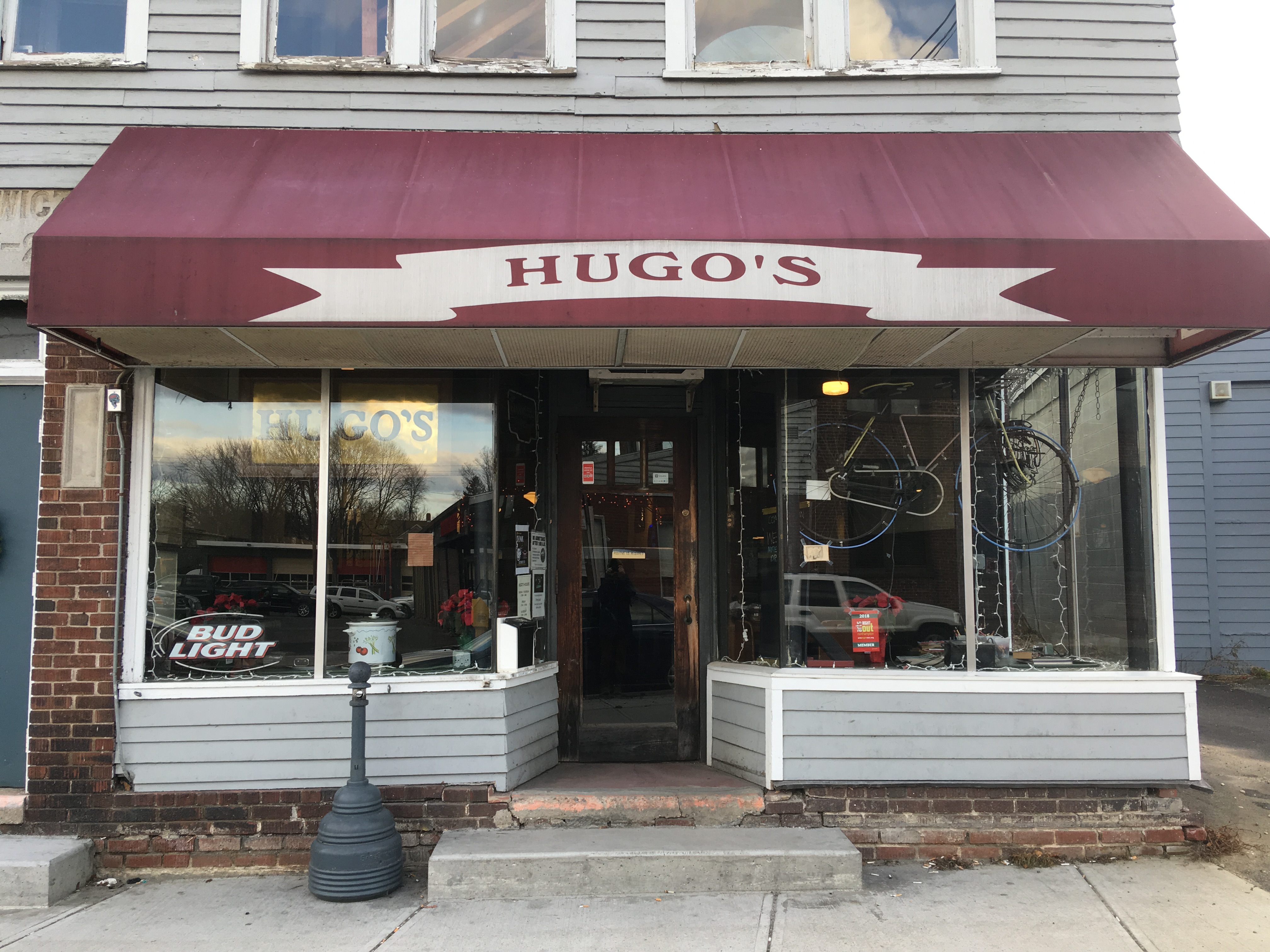 Hugo’s Cafe, a Northampton institution, is closing abruptly on December 12 after 48 years of business. Northampton residents are far from strangers to shops closing and vacant storefronts; but as Hugo’s is one of the oldest bars left, its imminent departure is hitting particularly hard, and represents a real loss to the community.

“Business has been dwindling the last few years,” says Linda Omasta, Hugo’s general manager. She’s putting paper plates piled with popcorn and pork rinds down in front of every few people at the bar. “Pretty much the last ten years the owner has had to put his own money into the business every year. Can’t keep running a business like that…you want to make money.” She’s busy, and remarks that there are more people in the bar than on a usual Sunday because it’s closing so soon. “I just wish they’d been coming around this whole time,” she says.

It was ultimately up to Gerard Paquin, who owns the whole building that houses Hugo’s and its neighbor Northampton Bicycle, to close the bar. He plans to incorporate the bar into Northampton Bicycle, selling beverages to bike enthusiasts in what promises to be a very different bar from Hugo’s before it. When interviewed by the Gazette, Paquin justified Hugo’s closing in favor of a trendy bike shop bar: “This is a way to try to ensure our future.” Though the “our” he’s referencing clearly does not include employees like Linda Omasta, who has worked for him for over twenty years, and is now losing not just her livelihood, but a place she has also loved as a patron since she was 18.

In a town rife with designer cocktails, mixologists, and microbrewed craft beers, Hugo’s is among the last of its kind: a small bar with two pool tables, a couple of big TVs, where you can get a can of PBR or a $5 vodka soda, and where you’re nearly guaranteed sweet and sassy banter with a familiar bartender. “A bar bar,” one longtime patron, Margaret Holes, calls it. A regular at Hugo’s since the early 90’s, one of the things Holes loves best about Hugo’s is the community. “It’s kind of smarmy to compare it to ‘Cheers’ but it is kinda like that,” she says. “People know your name.”

Opened in 1970, Hugo’s used to be a bar where the neighborhood workers, on their break from auto shops and factories, could come in for a beer and a sandwich. “So this place, at lunchtime, it would be packed, because the guys could come in in their dirty clothes and have a couple of beers and a sandwich and go back to work,” says Omasta. “It was blue collar.” Eventually, Hugo’s would be faced with the ultimatum many bars faced—food or smoking—and smoking won out, so Hugo’s lost its deli case, but retained the “cafe” in its name.

Northampton has long since lost the bulk of its industrial trades, but even back in the 90’s there was a different food service vibe in town — it was the time before the craft beer craze, when there were fewer pubs with offering simpler beverages, with less frenzied competition and overlap between bars. In recent years, more and more restaurants and bars have flooded the small town center. “There are just so many places people can go to drink now,” says Holes. “I think it used to be easier years ago when there weren’t as many places.”

The type and structure of businesses in the downtown business district has been changing—prices have been rising dramatically—but residents of this city still need the same things they’ve needed for decades, and are gradually being pushed out. “I don’t know about other people,” says Holes, “But my salary is not going up in comparison to the prices of everything.”

In the last few years, beloved businesses have closed, multiple storefronts have remained empty for years, and what businesses have moved in are largely high-end. Compared to what preceded them, the new places are unaffordable for many Northampton residents. The recent opening of NETA’s recreational marijuana dispensary on Conz St. and the new brewery on Pearl St. has only increased the massive influx of tourists and non-local investors. Being branded more and more as a sort of regional tourist destination means Northampton is also an increasingly unfriendly place for people of less means—whether it’s houseless people being targeted and surveilled more on the street, or working class people losing the neighborhood bar they’ve been coming to for decades.

And so Hugo’s, a well-loved dive with a reputation for bartenders with “potty mouths,” a devoted crew of regulars, and a decades-old history, has become yet another casualty. “It’s not a pretentious place,” says Holes. “And that has always attracted a lot of people. Here, somebody comes in with microwaved pork rinds, and is like ‘Share em with the bar!’ It’s really been a place where you can go and be yourself, and you don’t get looked down upon.”

Becca Abrams is a Northampton resident and graduate of Hampshire College in Anti-Zionist and Environmental Justice studies. She currently works as a massage therapist, and as a peer support worker with the Recovery Learning Community.