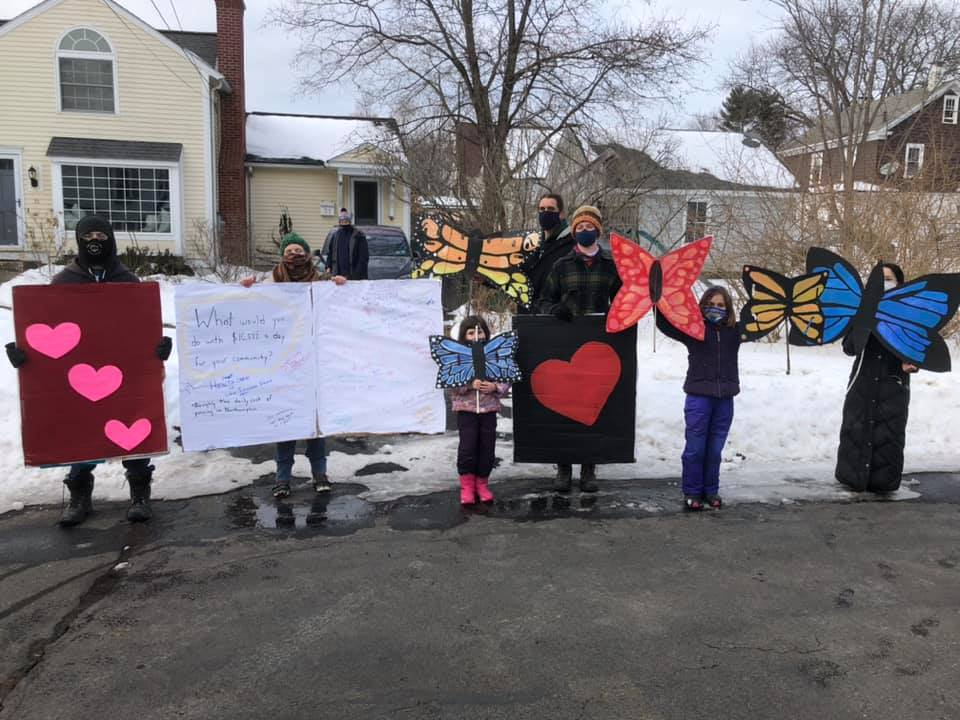 Northampton Mayor David Narkewicz returned home on Valentine’s Day from walking his dog to a surprise: a small crowd had gathered to hand-deliver Valentine’s Day-inspired cards inscribed with messages by city residents with their visions for a re-imagined approach to community safety.

The four-foot cards handed to Narkewicz were part of an ongoing campaign by Northampton Abolition Now (NAN) to positively frame conversations about police divestment, according to Mary Jones, a NAN volunteer. On February 14th, NAN organizers invited members of the public to spend a few hours decorating the cards and to add their wishes for how they want reallocated police dollars to be spent in Northampton.

“We are asking for the city’s budget to reflect the values of the community and to invest in programs that will take care of people in Northampton that don’t reproduce harm,” Jones said in an interview with The Shoestring. “We need a massive investment in our community, in systems that are truly going to work for the community, versus putting the lion’s share of hard-earned tax dollars in a system that’s been proven to not keep us safe with police.”

Jones added that the current law enforcement system “prioritizes the safety of some people over other people,” and that police generally are not held accountable for their actions. Instead of policing, she argued, the public would be better served by city-funded programs that address the root causes of social problems –– such as housing-first initiatives, non-coercive mental health services, and peer-led violence prevention and conflict resolution.

Jones said NAN held the event at Pulaski Park for nearly three hours with an estimated 50 people over the course of the afternoon taking part in the event. A small group of about ten proceeded to deliver the cards to the mayor at his home.

NAN contends that police reform has historically failed to end police violence, and that police must be “reduced in size, in budget, and in scope,” according to the group’s letter of demands, “A Blueprint for Abolition: Northampton.” Demands from the group include reinvesting the money cut from the police budget last summer — approximately $669,957 — to build permanent structures for unhoused people; mutual aid projects to support people during the COVID-19 pandemic; and individual grant programs to support neighbors in emergency need.

Many of the Valentine’s Day messages written for Narkewicz reflected many of the same ideas.

Written responses included: “universal basic income;” “food for all throughout the city;” “33 people’s monthly rent a day.” Many of the recommendations revolved around feeding the city’s at-risk populations, establishing peer-led services, and creating a year-round shelter.

NAN advocates argue that the current status quo of policing as public safety is harmful towards minorities and vulnerable populations, and that drastic changes are needed to create more peaceful communities.

Douglass said the group is advocating for the creation of a new Department of Community Care that can house community-led safety programs led by the people directly impacted by programs and services traditionally left for police. This would include creating mobile crisis response programs that are staffed by trained peer crisis responders and EMT’s.

“Fundamentally, the police department and many existing social service agencies are unaccountable to the people who are most impacted by their activities,” Douglass said. “Peer-led mobile crisis responses are one example of a successful alternative to policing that can be run through a logic of care rather than punishment.”

The Crisis Assistance Helping Out on the Streets (CAHOOTS) program in Eugene, Oregon, could be a model for how Northampton approaches public safety, according to Douglass.

CAHOOTS began thirty years ago and is funded by the city of Eugene to respond to crisis with a nurse or EMT and an experienced crisis worker instead of an armed police officer. In 2019, CAHOOTS responded to nearly 20,000 calls and only 300 of them required a call for police back up, according to a report by Eugene Police Department.

“We are optimistic that if Northampton begins to shift its investment paradigms now – away from control and towards human thriving – we can show how non-carceral approaches to crisis response and community care are both viable and effective,” Douglass said. “As a growing number of cities around the country are already doing, Northampton too can start shifting resources away from policing that criminalizes and harms, and into systems that create real and lasting safety for everyone.”

On Saturday, February 27, NAN is hosting a virtual art party with a theme of “invest in communities, divest from policing” on Zoom from 1 p.m. to 3 p.m. The event is in coordination with Western Mass Showing Up for Racial Justice, The Resistance Center for Peace and Justice, and Sunrise Western MA.

Organizers said the event will encourage creative art and sign-making while delving into discussions around collective power, resisting policing, and community-centered initiatives that keep people safe.