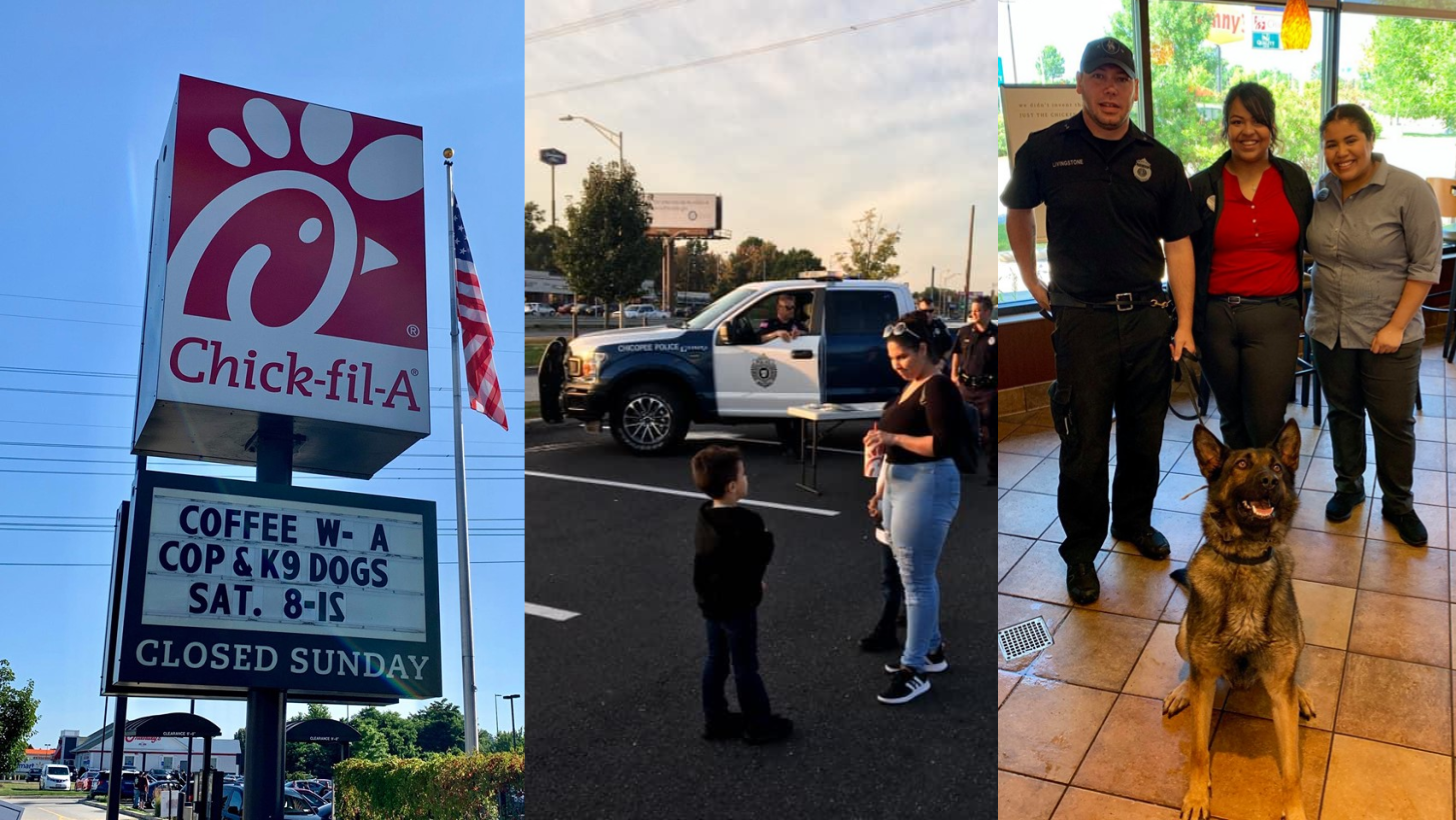 Chicopee police publicly cluck themselves in partnership with anti-LGBTQ chain

In 2012, widespread protests broke out against Chick-fil-A after its CEO Dan Cathy openly plugged “the biblical definition of the family unit,” among other offenses. At the time, Dallas activist Carly McGehee organized a nationwide kiss-in, saying the company “is continuously supporting hate and bigotry and intolerance.”

As part of an East Coast expansion, in 2014 the city of Chicopee in Western Mass saw the opening of one of Cathy’s restaurants. And by at least one municipal measurement, it has had an extremely warm welcome; despite the chain’s anti-LGBTQ reputation, 24 out of 36 of the Chicopee Police Department’s community outreach events (listed on CPD’s official Facebook page) in the past five years have taken place at Chick-fil-A.

In response to concerns raised about its association with the brand, the Chicopee Police Department has commented, “They are a great company. They do great work here. End of discussion.”

Chick-fil-A is widely known for its public anti-LGBTQ stance and its corporate donations to anti-LGBTQ causes and groups, including to organizations classified as hate groups by the Southern Poverty Law Center, as well as the widespread animal abuse in its supply chain. As recently as May, the company’s vice president of corporate social responsibility and executive director of the Chick-fil-A Foundation told Business Insider that such donations are part of a higher calling. In recent weeks, Chick-fil-A has faced protests related to anti-homosexuality measures in Uganda, specifically the legislation known as the “Kill the Gays Bill,” which was introduced in 2009 and will be voted on again in the African nation’s parliament by the end of this year. The link is indirect, but donations from charity arms affiliated with Chick-fil-A and the founder’s family went to organizations that backed the original law.

In 2009, the year the Uganda Anti-Homosexuality Act was introduced, the WinShape Foundation (which receives almost all its funding from Chick-fil-A) donated nearly $2 million to anti-LGBT groups, including Exodus International. Exodus board member Dan Schmierer spoke at a Ugandan conference seen as a catalyst for the introduction of the bill, while WinShape continued to fund Exodus International until it closed, and also boosted the Family Research Council, which in 2010 lobbied Congress against a resolution denouncing the bill. WinShape also donated to the National Christian Foundation, which funded a pastor’s trips to Uganda to stage anti-gay rallies and push the bill. NCF has been called “the single biggest source of money fueling…[the] anti-LGBT movement over the past 15 years,” and Chick-fil-A CFO Buck McCabe has been on the foundation’s board of directors since 2005. The recent threat of reintroduction of the bill has been linked to a perceived uptick in state-sponsored actions against the LGBTQ community.

None of which has apparently fazed CPD. In 2016, the department ran a promotion in which information about road safety was included in Chick-fil-A takeout bags. Beyond the aforementioned two dozen engagements on the department’s Facebook page, two other CPD events are listed on the Chicopee Chick-fil-A page, while as recently as Oct 1, uniformed officers set up with a table and truck at the fast food joint’s fall festival. CPD’s page has also featured live streams of its public information officer asking for people to join them at Chick-fil-A, posing with the chain’s mascot, and in one case slaloming on a bicycle through soft drink cups set up as an obstacle course in the parking lot.

Back in July, exactly one week after the 50th anniversary of the Stonewall riots, the CPD posted an announcement that it would be holding a Coffee with a Cop event at Chick-fil-A. Shaffer, one of the two of us reporting this story, as well as members of the public, raised concerns about its regular use of the restaurant. In response, the department’s social media manager spent the week leading up to a planned event claiming that the local Chick-fil-A was not anti-LGBTQ, and ultimately went through with Coffee with a Cop on July 13. The CPD was aware of Chick-fil-A’s anti-LGBTQ donations before the July event—Shaffer shared the information with the Facebook manager and asked about the choice of location. CPD responded, “We do not indulge in politics. The owner and his staff have been tremendous to our department and entire community. We do not categorize all business or anyone for the actions of others around the country. Thanks.”

Two additional people posted concerns about the selection of Chick-fil-A, but were both brushed off. Gwendolynn Salvas wrote several comments; some, she said, were hidden by the department, while others were outright deleted. The deleted comments contained links, and by policy the CPD deletes any posts that include links. Each time it does so, though, it is destroying a public record, which is possibly a crime since posts to official social media accounts run by government agencies are considered public records. Guidance on this issue from the state spells out that comments must be preserved and retained properly, and notes: “Users have some First Amendment rights in posting content to public social media sites hosted by state agencies. Moderators must respect those rights by posting all comments other than those excluded for specific legitimate reasons, such as those identified in the [Agency name] Terms of Comment [link].” In the case of Salvas, she was also prevented from making further comments, which is arguably a violation of her First Amendment rights, per rulings about blocking people from forums run by public officials.

At a time when other government agencies are finally becoming skeptical of Chick-fil-A, it is troubling for a police department to proceed in this manner. The department’s association with the chain demonstrably excludes members of the LGBTQ community from community outreach efforts, while actions to silence concerns about the chain’s agenda appear to have been done in a criminal and unconstitutional manner.

Pressed to explain how working with a restaurant where part of the proceeds could be used to fund anti-LGBTQ initiatives that are detrimental to that community in Chicopee and elsewhere, the CPD accused Shaffer of discriminating against Chick-fil-A: “This owner and business and employees support the community. They donate to all causes in the city. They’ve never displayed any anti anything.”

“I’m surprised you would categorize all people and businesses into the same class over one comment from someone. Isn’t that what you are against? Bias? Discrimination? Categorizing everyone over one person?”

Shaffer’s comments on the thread were then hidden by the department. Salvas explained in a comment, which the department has also hidden, “It is a shame you choose to associate the department with a business that is publicly anti-LGTBQ. Most in the community are aware and will never be able to come to this event if it is held here. So there is discrimination right there, because you are continuing knowing full well this business is anti-LGBTQ. A police department carries quite a bit of weight when it comes to associations whether or not you think of yourselves as ‘indulging in politics’. You are involved whether you like it or not.”

This article was produced in collaboration with the Boston Institute for Nonprofit Journalism with CriticalMA. To see more reporting like this, please donate at givetobinj.org.