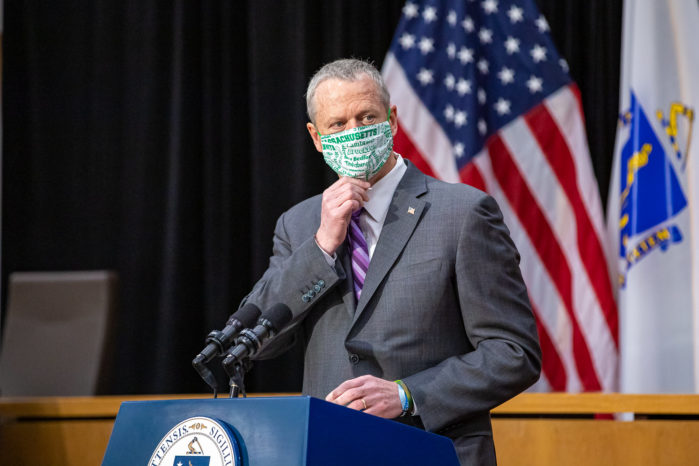 In consideration for its Services, the Commonwealth agrees not to use McKinsey’s name or refer to McKinsey’s work outside its organization without McKinsey’s prior written permission.”

On March 15, 2020, Massachusetts officials were facing down a pandemic. Positive coronavirus cases had just cleared triple digits, a small start on the way to the current figure of more than 600,000. Gov. Charlie Baker ordered all schools closed for three weeks and told restaurants they couldn’t serve on site for the same period.

“Given the rapidly evolving nature of this crisis and the extreme human stakes, the Commonwealth’s response needs to be in proportion,” state officials wrote.

And on March 15, they hired McKinsey & Company.

For the past 13 months, the Baker administration has paid McKinsey millions of dollars for consulting and support services touching many parts of the pandemic. The initial no-bid contract of $1.9 million for two months of work has been amended nine times, increasing the total payout to more than $20 million in the most recent version.

Recently, McKinsey has come under fire for its work with opioid manufacturers, and earlier this year agreed to a $600 million settlement after a lawsuit by 49 states accused the company of working to “turbocharge” drug sales and contributing to the ongoing national opioid epidemic. The company has frequently worked for the state, and has performed consulting during the pandemic—the Department of Education has paid the company more than $1 million for “McKinsey’s perspectives and counsel on reopening elementary and secondary schools for all kinds of populations,” and for creating a “detailed Re-Open Playbook” through another emergency no-bid contract.

But the scope of McKinsey’s contract with the Executive Office of Health and Human services has increased over the past year, with amendments expanding the contractor’s duties from staffing the state’s COVID-19 “war room” and analyzing PPE logistics, to setting up public health databases and creating “playbooks” for high-risk communities, to analyzing the effects of lifting the state’s eviction moratorium.

“Like so many other businesses, McKinsey is committed to helping our clients with their response to the COVID-19 health and economic crisis,” a McKinsey spokesperson said. “McKinsey began working with the Executive Office of Health and Human Services (EOHHS) in March of 2020 to support EOHHS leaders with best practices, relevant data and analytics so they could make decisions and navigate the unprecedented situation of the pandemic. As the pandemic evolved, so did the Commonwealth’s need for support and rapid response. McKinsey has provided relevant data and analytics as they evaluated and addressed critical issues such as testing, PPE, and hospital surge capacity.”

The initial contract ran from March 15 to May 9, paying McKinsey $235,000 a week. McKinsey staff would help EOHHS “in standing up a full round-the-clock COVID-19 Command Center/War Room, and Project Team” that would organize the state’s response to the coronavirus across all areas, including supply chain and procurement issues, reporting and tracking, and public guidance. And they would be part of the so-called war room itself, which reported directly to Baker.

McKinsey would help analyze and develop plans to expand testing and allocate PPE, and develop surge health care capacity, as well as be involved with coordination across other state departments like Transportation and Public Safety and local agencies, according to the contract.

But while McKinsey would be involved in analysis, study and modeling, including “worst case” COVID-19 scenarios, the contract emphasizes a separation between McKinsey’s work of “objective, fact-based analysis” and the policies that result from it: “The contractor will not advocate for, or recommend that, a specific policy be adopted, or action undertaken, by EOHHS.”

Before this contract ended, it was amended. For an additional $1.7 million, McKinsey would also support the Massachusetts Emergency Management Agency and have a dedicated, full-time team of consultants working there. But the limitation of liability agreed to in the first contract was also amended; both contracts say McKinsey “does not guarantee results,” and say the state is liable for its actions, while the initial contract states that neither party is legally responsible for “any lost profits or other indirect, consequential, incidental, punitive or special damages.” The amendment adds new conditions, including that “in no event shall the contractor be liable for, damages for the Commonwealth’s use of contractor provided products or services, loss of Commonwealth records, or data (or other intangible property).” That liability agreement has remained constant for subsequent amendments.

After that initial contract, EOHHS and McKinsey agreed to two month-long extensions to continue the agreed-upon scope, netting McKinsey another $3.5 million. And at the end of June, the contract was extended through mid-December—with some new duties. McKinsey would run testing analytics on COVID hot spots, produce daily state-by-state comparisons, “assist with ongoing strategic direction on testing” through August, and provide “ongoing project management for public health data infrastructure work” through the rest of the year.

In mid-October, though, the contract was amended again. This time, McKinsey was tasked with creating a “COVID Enforcement Intervention Task Force playbook with portfolio of support measures to be deployed by state agencies and local government.” That playbook would be for communities identified as “high risk,” and McKinsey would also handle analytics and “public messaging activity” for said playbook.

The company also took on a new role in the COVID-19 crisis—analyzing what would happen if Gov. Baker lifted the eviction moratorium he had ordered earlier in the year. McKinsey was charged with providing “support in modeling the impact of various programs under consideration by the state in response to the lifting of moratorium on evictions” and testing capacity of existing programs and services while looking at potential changes.

While the amendment was signed on Oct 13, it contained a “settlement” of $499,000 for work McKinsey had already done between Sept 7 and Oct 13 on the playbook and eviction moratorium. Baker lifted the moratorium on Oct 17.

A week later, the contract was amended yet again, with more settlements for work already done on the eviction moratorium. But the bigger addition was preparing for vaccinations. McKinsey would be involved with planning and rollout of vaccine distribution, from the broad “Enable successful engagement/decision making with Secretary of EOHHS” to more specific analytics like estimating medical supplies and running “geospational analytics to understand geographic coverage of current access sites and identify any gaps.”

As 2020 ended, the contract was amended for a seventh time, with more vaccine work for McKinsey. The company provided “light-touch” support for organizing mass vaccination and other vaccination sites and produced “regular dashboards to inform executive decision making.” They also worked on tracking vaccine orders.

That amendment was to run to the beginning of April, but in mid-February the contract was amended yet again, effectively involving McKinsey with the rollout of both retail pharmacy and health system/PCP vaccination channels, with the goal of bringing sites online and promoting “positive user experience and cooperation with DPH priorities in … attestation and scheduling systems.” The two amendments brought in more than $5 million for the company.

And in April the contract was amended for—so far—the final time, to run through the end of May. McKinsey is still running state-by-state comparisons and briefing the executive branch but is now handing off analysis and data processing to EOHHS and DPH, according to the contract, for an additional $2.4 million.

As we reported in a prior article about McKinsey and other pandemic contractors, whatever McKinsey accomplished, it does not appear to want specifics tied back to the company. As the terms of the company’s proposal for its education consulting state, “McKinsey’s work for the Commonwealth is confidential and intended for the Commonwealth’s internal use only. … In order to promote true neutrality on issues, provide an environment for uncensored guidance for our clients, ensure compliance with our contract confidentiality requirements, and better empower our clients, McKinsey does not advocate, present findings, or consent to public references in any public meeting, writing, or other public forum. … In consideration for its Services, the Commonwealth agrees not to use McKinsey’s name or refer to McKinsey’s work outside its organization without McKinsey’s prior written permission.”

This article was produced in collaboration with the Boston Institute for Nonprofit Journalism as part of its Pandemic Democracy Project.