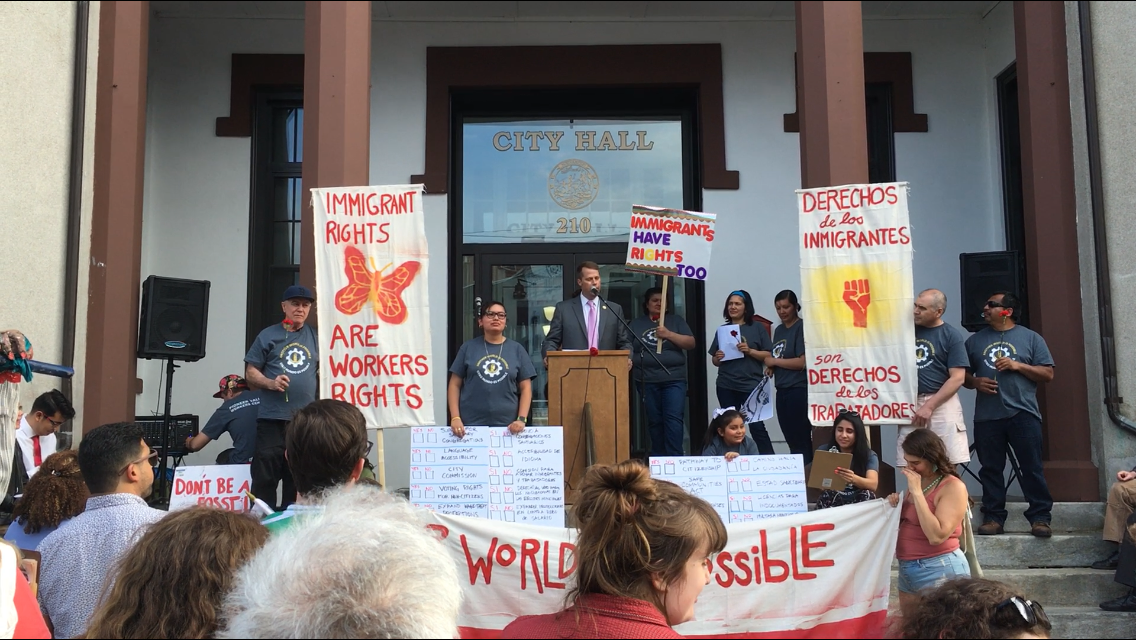 Northampton Mayor David Narkewicz has been vocal in supporting undocumented immigrants. In 2014, he issued an executive order declaring that “Northampton is a welcoming city.” The order states that the Northampton Police Department will not honor detainer requests from ICE that are non-criminal and don’t have a warrant from a judge. It also makes clear that NPD will not ask people their immigration status during traffic stops.

The Shoestring has noted the limits of protecting only non-criminal undocumented immigrants in the past. Writer Les Mack pointed out in “Understanding the Safe Communities Act” that crimes such as re-crossing the border illegally or forging work documents are felonies, which are, for instance, grounds for honoring a detainer request, even in a sanctuary jurisdiction. Narkewicz has been transparent about this since he issued the order. After Trump threatened to cut federal funding for sanctuary cities last year, he explicitly made the point that his police department takes crime seriously on a WGBY television segment. During the appearance, he also made clear that our current immigration climate is rooted in fear not fact, noting that the countries being targeted by the Trump Administration didn’t pose disproportionate threats to the United States, and that the two countries most responsible for terrorism in the United States, namely the U.S. and Saudi Arabia, didn’t make the banned countries list.

More recently, on May 1st, Mayor Narkewicz participated in a press conference (it was more like a rally, members of the press were never allowed to ask questions) with the Pioneer Valley Workers’ Center. There, Narkewicz announced his support for a handful of policy proposals, many of which are subject to approval from the state and federal government, which were recommended by the PVWC Worker Committee, a group of local immigrant workers. They included 1) A pathway to citizenship; 2) A press conference with immigrant workers; 3) Support for sanctuary congregations; 4) Letting immigrant residents know about ICE raids in Northampton (assuming the mayor is privy to that knowledge); 5) Getting in touch with the Chamber of Commerce to do know-your-rights style trainings for employers and workers about their rights when interacting with ICE officials; 6) Better language accessibility in city government; 7) A city commission on these issues that includes immigrant workers (unlike his ‘Work Group on Panhandling’ which didn’t include impacted communities); 8) Expanding municipal voting rights to non-citizens; 9) Issuing penalties for businesses that actively collaborate with ICE (e.g. disclosing employee information without a subpoena or warrant); 10) Pledging support for a state bill that would give driver’s licenses to undocumented immigrants; and 11) Support for the Safe Communities Act (more on that below).

In addition to pledging support for all of these policies, last week, when a Guatemalan immigrant, Lucio Perez, had to leave the Amherst church where he had been in sanctuary to seek life-saving medical care, Mayor Narkewicz risked the felony charge of aiding a fugitive to ride with Perez back to the church. He told The Advocate’s Dave Eisenstadter, “I’m proud to stand with Lucio and other immigrant workers in keeping with our values as a sanctuary city.”

But what did he mean by “our values as a sanctuary city?” The night before the May Day rally, The Shoestring published a piece about how the NPD uses COP LINK, a privately run police database that shares information with ICE and other federal agencies. Despite the Mayor not responding to two emails from The Shoestring on this topic, I was able to speak to him about this after the May Day rally. He told me that he is still looking into the situation, but that it didn’t violate the aforementioned executive order.

In a piece published last week by the Gazette about local sanctuary cities using COP LINK, Mayor Narkewicz spoke to reporter Dusty Christensen, who wrote: “Narkewicz said he understands the fear some might have with local police sharing information that could be viewed by ICE. But he said he’s trying to understand to what extent ICE actually accesses that information, and whether COPLINK’s usefulness to the police department as a crime-solving tool outweighs that fear.”

What’s odd about Narkewicz’s stance on COP LINK — reconciling the concern over data sharing with ICE with the needs of police department — is that it is fundamentally inconsistent with a policy he says he supports: The Safe Communities Act. During the May Day rally, Narkewicz lambasted the Speaker of the House, Robert DeLeo (Dem, Suffolk), for saying they weren’t going to get any immigration legislation passed this year on Beacon Hill. A passionate Narkewicz, with his voiced raised, said, “We’ve been pushing for the Safe Communities Act now for several years. And if we can’t pass the Safe Communities Act in 2018 with President Trump, I don’t know when we’re going to do it.”

As The Shoestring has noted before in our aforementioned piece about the Safe Communities Act, one of the facets of the proposed law is explicit regarding local law enforcement sharing database information with ICE. The SCA states: “Neither a law enforcement agency nor the Massachusetts Registry of Motor Vehicles shall make any information in its databases or other record-keeping systems available to any entity for enforcement of any federal program requiring registration of persons on the basis of race, gender, sexual orientation, religion, or national or ethnic origin.”

I reached out to Mayor Narkewicz by email (again) and by phone to get a comment, his assistant told The Shoestring that he didn’t have any comment on the matter.

The Shoestring was able to speak to the Northampton Worker’s Committee — the group of immigrant workers organized by the Pioneer Valley Worker’s Center that sponsored the May Day rally — about COPLINK and how the Mayor is weighing the needs of immigrants with the needs of the police department.

The Committee said that while many people do commit crimes and can be dangerous, “we’re not criminals.” They spoke about a Border Agent who shot and killed a young woman in the head last week, and said, “they’re the criminals; the police are criminals.” The committee also questions the motives of the mayor and commented how politicians can be “corrupt and dirty,” while at the same time seeing “immigrants as not having a lot of worth.”

The Workers’ Committee called on the mayor to stop using COPLINK, assuming it’s in his power to do so.