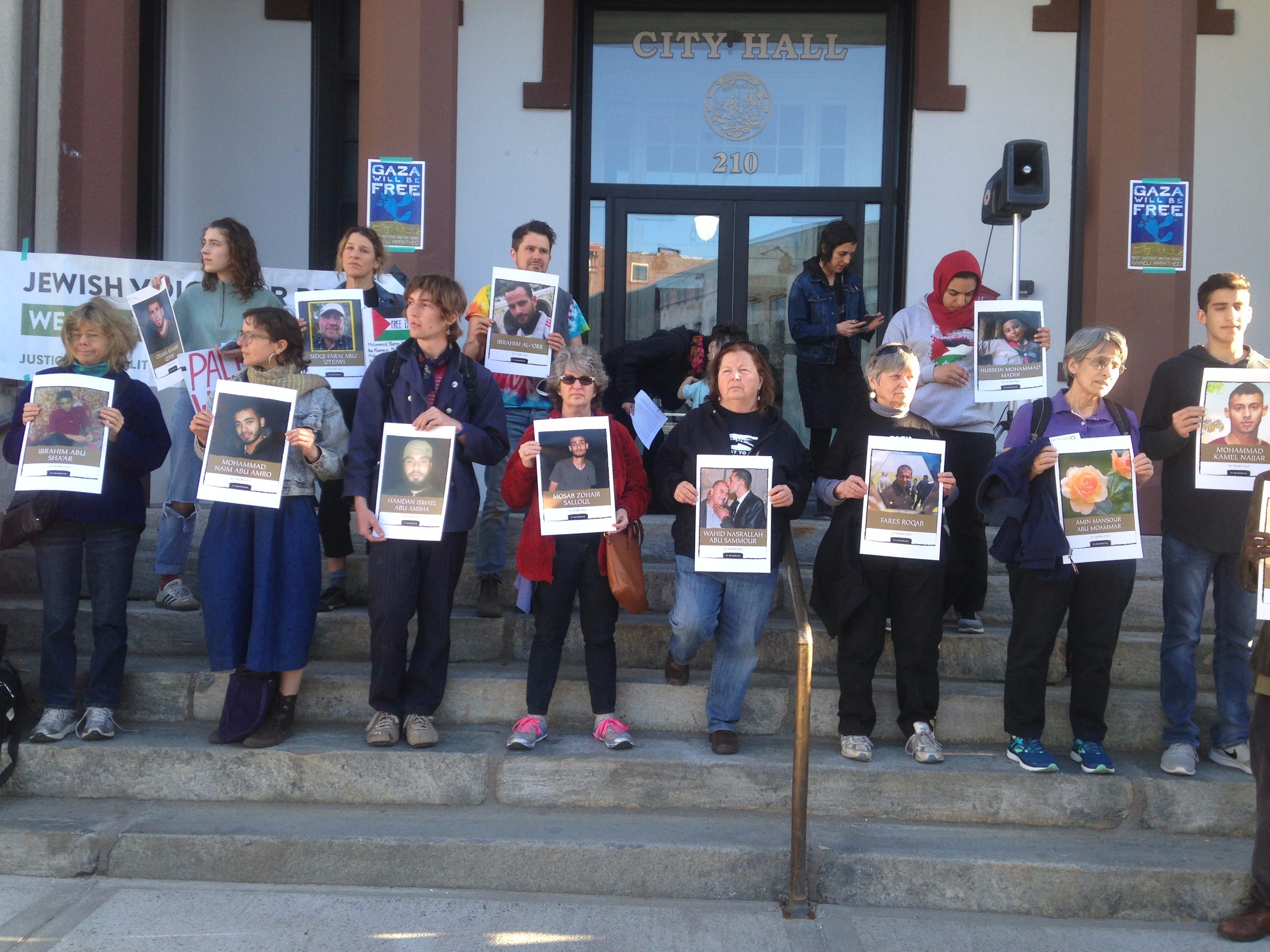 Earlier this week, 75 people gathered at the steps of City Hall as Jewish Voice for Peace (JVP), held a Vigil for Gaza to stand in solidarity with Palestinians who are taking part in the Great Return March and to mourn the 34 killed and 2,000 wounded by the Israeli Army during the protest. At the time of publication, the total killed is now 39 with 4,000 injured. JVP is a national grassroots organization that seeks an end to the Israeli occupation of the West Bank, Gaza Strip, and East Jerusalem as well as security and self-determination for Israelis and Palestinians. UMass Students for Justice in Palestine were also present at the vigil.

The Great Return March is a grass roots, civilian led Palestinian six-week long campaign that has drawn an estimated 30,000 people to the Gaza border to demand the right to return to their homeland. The demonstration coincided with the anniversary of the founding of the Israeli state, what Palestinians refer to as ‘al Nakba,’ meaning ‘the catastrophe.’ During the protest, Israeli Army snipers followed orders to open fire on unarmed Palestinians including children, medics, and members of the press.

The U.N. has declared that due to the destruction of the Israeli war on Gaza, and an 8 year economic blockade by Israel and Egypt, Gaza may be uninhabitable by 2020. It reports, “The war has effectively eliminated what was left of the middle class sending almost all of the population into destitution and dependence on international humanitarian aid.”

The organizers of the Great Return March have called for demonstrations to take place every Friday during the six-week long protest. JVP decided to hold its event on a Thursday instead, so that local Jewish clergy who observe Friday as a day of prayer could attend. The vigil was rescheduled to Sunday due to weather. Though local Jewish clergy members were invited, none attended.

The vigil began with a moment of silence as community members held large pictures of those killed.

JVP member Rachel Weber spoke and criticized mainstream media for its portrayal of the Israeli-Palestinian conflict, “When you see in the media headlines about Gaza clashes, and border confrontations, presenting both sides as taking part in comparable violence, know that it is a lie.” She went on to share the history of Palestinian oppression since the founding of the Israeli state in 1948 which entailed an ethnic cleansing operation by Israeli forces during the Arab-Israeli war from November 1947 to July 1949. In closing she reminded everyone why that history is important, “Palestinians marched not toward the border with Israel, but rather toward the fence that has kept them segregated and imprisoned. The only way forward is to realize and recognize that there is a root cause and that is 70 years of catastrophe, 70 years of Israeli occupation.”

Mariam Aydahl from Palestine spoke next, “Palestinian people have 10% of what we used to have. But we are the oppressors for most people.” She spoke about the militarization of Israeli society, “Israel encourages civilians to have guns. But we are not allowed to have arms, all we have is rocks which we use to protect our villages.” She asked the crowd, “Please spread the word, one day we will have peace and our land back.”

Next, JVP member Dori Midnight asked the crowd to continue speaking out against the Israeli occupation, “We have to be the ones to make this statement and come out because so many people — especially people of color, especially Muslim people, especially Palestinians — are accused of anti-Semitism anytime they speak out against this atrocity.” She called on Jewish Americans to hold other Jews, the U.S. government, U.S. institutions, and the Israeli government accountable. She told the crowd that local government and local police departments must be held accountable as well, noting that U.S. police departments are sending their officers to train in Israel.

(The JVP is currently involved in the Deadly Exchange project, which seeks to end the practice of training U.S.law enforcement in Israel. Massachusetts Police Chiefs from Somerville, Watertown, Worcester, Foxborogh, Arlington, the Police Chief for the Massachusetts Institute of Technology, and the Boston Police Department Commissioner William Evans have all recently trained with the Israeli Army. Last week, Durham, North Carolina, became the first city in the U.S. to prohibit police exchanges with Israel. )

Between speakers, I spoke with some people who attended the vigil and asked them what made them come out and what they wanted their local government to do in response to the continuing siege on Gaza.

Manny Eduardo said, “I believe that what is happening with the people from Palestine is atrocious, especially after a peaceful demonstration. And then the government of the United States keeps aiding and abetting these criminals and gives them weapons. So I’m hoping that maybe City Council will pass a resolution to stop the Israeli oppression and to have Palestine live free of death.” In 2016, the U.S. made a deal to give Israel 38 billion dollars in military aid over the next 10 years.

One person I spoke to said, “I am conflicted. I loved growing up Jewish. My family died in the holocaust.” She asked, “Why are Jews part of this aggression?”

After the speakers, people marched down Main St. in solidarity with Palestinians and the Great Return March. Before leaving the City Hall steps Weber asked those who attended to recognize how the connection between the state violence occurring in Springfield, MA at the hands of the Springfield Police Department is related to the state violence of Israel toward Palestinians. As people marched from City Hall, they chanted, “From Springfield to Palestine, Occupation is a Crime.”

As people returned to the steps of City Hall, they found their way into a circle.

JVP members asked that people consider filling out a postcard to send to Elizabeth Warren, who amongst her silent Democratic colleagues, asked that Israel act with restraint against Palestinian protesters.

I spoke with Mariam Aydahl after the vigil. She told me what she experienced during her trip to Palestine three months ago. “Israeli soldiers stand at the gates of all Palestinian villages. They intimidate us. No one can go in or out. They target teenage guys specifically. My cousin was shot at and still has bullets in his leg. When I was there the air in my village was filled with tear gas.” I asked her what she wanted Americans to know about the Palestinian people. She replied,  “We need to strive to get understanding.” I asked, “What brings you hope?” She smiled and said, “God, Allah. We are promised peace.”

Blair Gimma is a co-editor of The Shoestring. They are alive in Northampton, MA.