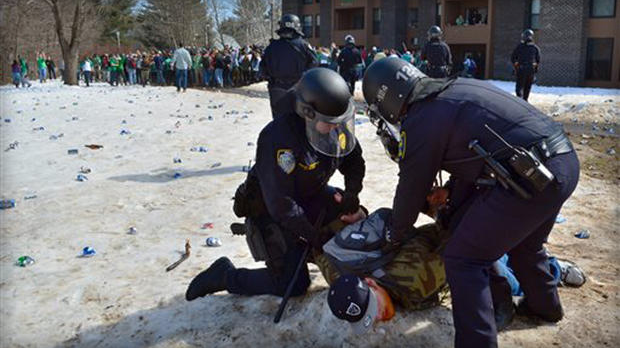 [Update 3/1: We are changing the picture to Blarney Blowout, an event that Kasper says this equipment will be used at.]

On Thursday, March 1, the City Council will vote on a riot gear request that is hidden in a financial order and buried in the City Council Meeting agenda, which is hard to locate on the City Council website. Northampton Police Chief Jody Kasper has requested $75,000 to spend on “protective equipment and training” for the Northampton Police Department. According to the city’s Capital Improvement Plan (CIP), created by Mayor Narkewicz, the $75,000 is part of a series of appropriations she has requested for the NPD over the next five years. The NPD will request $75,000 from the city budget again in fiscal years 2019 and 2023 accumulating to a grand total of $225,000 that will be spent on items like ballistic helmets, rubber bullets, and pepperball guns.

Order 18.044 is comprised of 20 capital improvements that total 1.486 million dollars and includes requests to refurbish a fire ladder, to repair the steps at the Academy of Music, and to purchase a food delivery service van for Northampton schools. Nestled between these constructive additions to city services is Kasper’s request to purchase chemical and blunt force trauma weapons. Kasper’s request is specifically categorized as a capital improvement for “Police.” However, after a closer read, The Shoestring identified two additional police projects in the order. A request filed as an “Information Technology Services” matter asks for $66,800 to replace the video system at the NPD police station. And a request filed as a “Northampton Public School” matter requests $30,000 to upgrade surveillance cameras already installed in Northampton public schools. With the addition of these two requests, on Thursday night the NPD will be asking us to give them $171,800 of our hard earned wages so that they can watch our school children on state of the art police station monitors and in the event that we got so upset about it that we were to occupy Main St, we are purchasing gas pellets and rubber bullets for them to shoot at us while they protect themselves with new chemical gas masks.

As detailed in the CIP, Kasper is specifically asking for protective helmets with face shield visors, biochemical gas masks with biochemical filters, plexiglass shields and training, tactical weaponry with special equipment and munitions, and less lethal options equipment and disbursement agents. According to Dr. Jennifer Fronc, a historian of policing, “less lethal options” is police-speak for weapons such as pepper spray, tasers, and projectile weapons, like rubber bullets and beanbag launchers.

To understand why the NPD is seeking to further militarize their operations, it is necessary to understand Police Chief Kasper’s theory of policing. In her book, Progressive Police Supervision (2011), she writes, “After the events of September 11, 2001, the atmosphere of the entire nation changed and with that the expectations and focus of police departments were forced to shift dramatically away from community policing.” She continues, “This new focus has resulted in a shift of federal and state funding from community oriented programs and positions to military efforts and law enforcement activities that are reflective of the nation’s new concerns.”

The thinking behind this request is right there, clear as a nice day with no cops on Main St. The NPD is requesting $225,000 worth of riot gear and tactical training to fight the war on terrorism which has gone great so far. This strategy is in accordance with the vast over-expansion of surveillance and military tactics enabled by the Bush administration in response to 9/11. And it is a 45 and Jeff Sessions’ approved agenda. In August 2017, Sessions notified law enforcement officials that Trump was ending the Obama administration’s ban on certain military equipment, “[Trump] is rescinding restrictions from the prior administration that limited your agencies’ ability to get equipment through federal programs, including life saving gear like Kevlar vests and helmets and first responder and rescue equipment like what they’re using in Texas right now.” It is important to note that Obama did not ban military equipment abroad and dropped a U.S. bomb on foreign soil every eight minutes of his presidency.

In 2016, someone requested the NPD weapons inventory by filing a Freedom of Information request. After ten follow-up emails, Kasper finally responded and revealed that the Northampton Police Department already owns tactical weapons, including OC (Oleoresin Capsicum) Spray, “Less-lethal Launchers,” and Pepperball Guns. She refused to reveal the entirety of the NPD’s arsenal saying,

“Disclosing information regarding the type of equipment utilized by Northampton police officers would potentially endanger our officers and citizens by allowing those suspected of engaging in criminal activity to obtain their own equipment to avoid and/or counter the efficacy of the Department’s equipment. In addition to the safety risks associated with the provision of this information, disclosure would adversely impact the Department’s ability to respond to criminal activity and provide effective police services.”

The NPD’s power relies on their ability to use force. They have an arsenal of lethal weapons, the right to use lethal force, the ability to punish people economically through citations and bail, and the ability to detain and incarcerate people. Their special access to the most powerful political actors in the city and state has allowed them to get access to weapons of force.  However, force is not so much contained within a weapon, as it is sustained by an ideology of domination that depends on it. It is difficult to make actual sense as to why Jody Kasper wants $225,000 for riot gear in Northampton. But if the NPD’s source of power comes from its ability to use force, then this request makes perfect sense.

On Thursday March 1, the Northampton City Council will be voting on whether or not to approve the NPD’s first $75,000 request to purchase riot gear. During public comment, Northampton community members are calling for a People’s Public Hearing on the priorities laid out in the Mayor Narkewicz’ Capital Investment Plan. Anyone can speak for up to three minutes during public comment, which takes place at the very start of the meeting at 7pm. This is an opportunity for you to tell City Council about your vision for Northampton’s future.