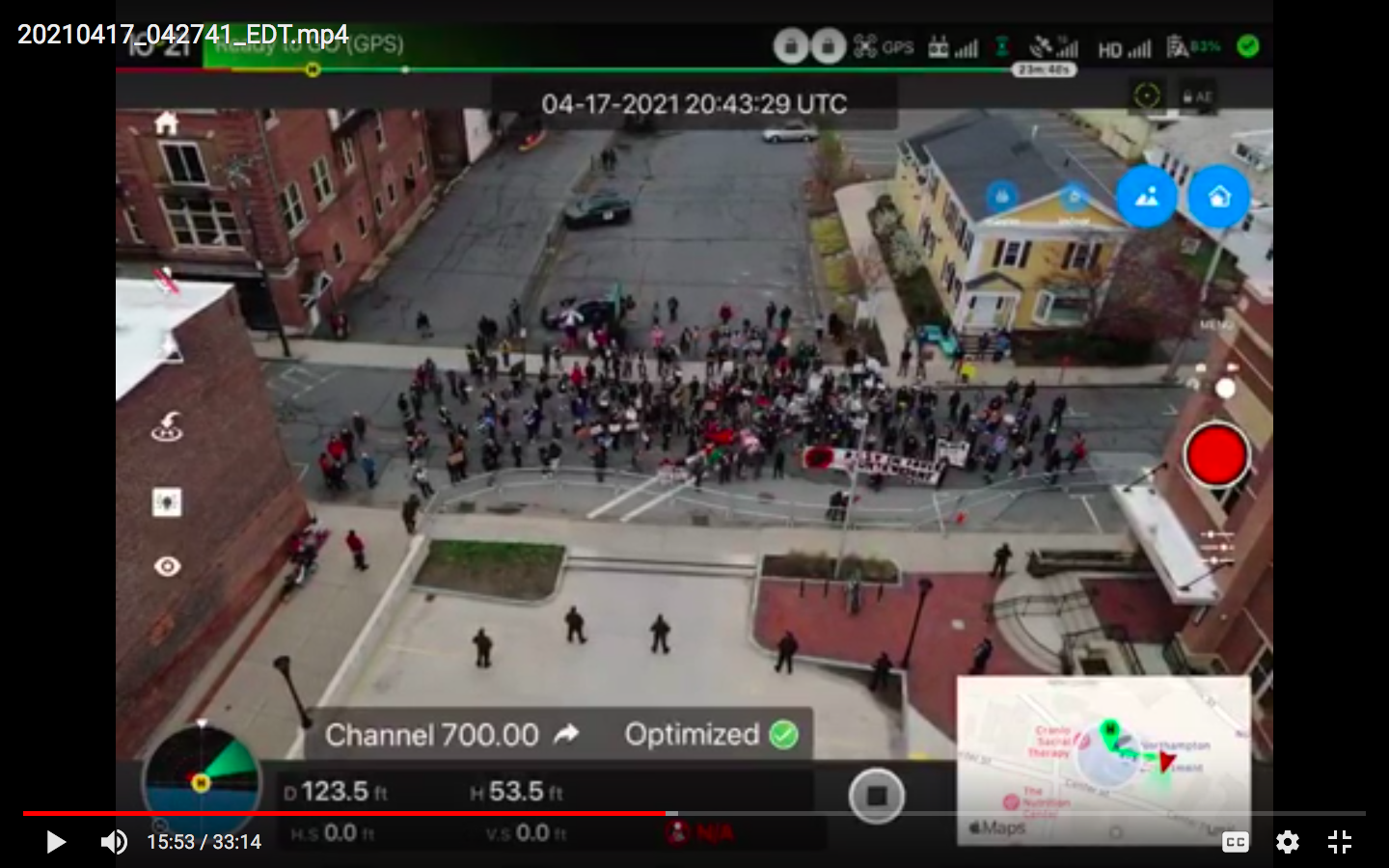 Editor’s Note: This is a follow up to our 2018 story on NPD drone use. It also compliments our recent story about the NPD’s lack of records for temporary surveillance cameras.

In 2018, The Shoestring reported on the Northampton Police Department’s use of drone technology. At the time we learned that the police department had used drones to surveil the 2018 March for Our Lives protest against gun violence. The story explained that despite the City Council’s passage of an ordinance a few months earlier, which heavily restricted police surveillance in downtown Northampton, the NPD were able to use drone technology without any oversight from the city’s legislative branch. In other words, it was a work around.

As protests and other first amendment activities take place in Northampton, the NPD continues to use drones for surveillance. Record requests about drone flights during recent protests raise questions about how the surveillance of first amendment activity is justified in accordance with the NPD’s stated drone policy. The Shoestring requested video footage and documentation about drone flights that took place on April 17th and April 18th, 2021.

On April 17th, local groups organized a march from the Skate Park to the police station to protest the police murder of Daunte Wright in Minneapolis. The police launched their DJI Mavic 2 enterprise drone off the roof of the police station nine times, totaling 150 minutes of flight time, according to their log data obtained by public records request. In the footage that The Shoestring reviewed, the drone captured multiple stages of the march and followed the protest through town, as it stopped in front of city hall and on Center Street at the police station. According to the “notes” section of the police’s log, the reason for the flight was “demonstration.”

The following day, on April 18th, the group Northampton Abolition Now hosted an event in Pulaski Park, where groups tabled and gave speeches. There was no component of the event that took place on public roads or imposed on automobile traffic. The police flew the same drone as the day before, launching it seven times for a total of 100 minutes of flight time. The “notes” of the police log again suggest “demonstration” as the reason for the flight.

According to the NPD drone policy we obtained, “All flights will be documented on a form or database designed for that purpose, and all flight time shall be accurately recorded. In addition, each deployment of the [drone] shall include information regarding the reason for the flight; time, date, and location of the flight; the name of the supervisor approving the deployment and the staff assigned; and a summary of the activities covered, actions taken, or outcomes from the deployment.”

NPD officers Patrick Moody and Mike Allard train police from all over the state on how to use the technology in law enforcement. As a memo Moody wrote to Chief Jody Kasper to justify more drone purchases states, “Mike Allard and I have trained over 70 public safety officials from Massachusetts and continue to consult and meet with departments to assist them in forming a drone program, consult on best practices and equipment.”

As noted in the first piece on NPD drone use, the police may use drones for seven reasons: exigent circumstances, situational awareness, search and rescue, tactical deployment, visual perspective, scene documentation, and assisting the fire department in fighting fires. “Demonstrations”—or any first amendment activity—is not one of the one of the reasons allowed by the policy.

As the ACLU of Massachusetts’ Kade Crockford explained to The Shoestring, the police could be using the reason of “situational awareness” to justify these flights, noting, “they’re gonna say [the reason for the flight is] situational awareness, which, as I said when we spoke years ago, is cop-speak for whatever we want.” Situational Awareness, as stated by the NPD’s policy, means, “To assist Incident Command in understanding the nature, scale, and scope of an incident and/or for planning and coordinating an effective response.”

According to Crockford, “there’s no limit to what you can justify under the framework of situational awareness. It is an extremely Orwellian phrase that the police use as a rug, under which they sweep many things like surveillance of protected speech.”

When pressed on the reasons for these flights, Captain John Cartledge — the highest ranking officer of the NPD drone unit — explained that the reason was, as Crockford suspected, situational awareness. He cited “officer safety reasons.” When asked how people congregating and tabling in a park endangered officer safety, Cartledge did not respond.

The Shoestring also pressed Cartledge on why the authorizing officer was not listed in the log we obtained. Cartledge responded, “The Officer-In-Charge is listed on a department roster, not the drone log.” When asked why this information wasn’t provided in the log when the department’s drone policy stipulates that it is required to be, Cartledge did not provide an answer.

“It’s extremely inappropriate for the Northampton Police Department to be using drones to monitor people expressing their first amendment protected speech rights,” Crockford said. “It would be worthwhile to know if the police department had any indication that there was going to be somebody who planned on shooting someone or committing some serious [act of] violence. Because absent specific information like that, the use of a drone to monitor people simply expressing their first amendment rights is chilling, and probably will have the impact, maybe intentionally, of reducing the number of people who engage in protected speech related activities in Northampton.”

I asked Crockford if there was a difference between a march through town and a tabling event in the park: “Not really, no. A drone is not required for either event. In the case of a protest blocking traffic, police can be on scene and radio ahead. It’s probably more useful information than looking at a blob of people from the sky.”

I shared footage with former City Councilor Alisa Klein who co-authored the anti-surveillance ordinance. “We fought hard in 2018 to ban the use of municipally-owned surveillance cameras in our downtown areas,” she said. “Knowing that the prohibition we passed back then can be easily circumvented by Northampton police officers is maddening. When the NPD can justify tracking my and fellow community members’ participation in constitutionally-protected protests and rallies, for instance, it makes a mockery of the intent of the ordinance we passed. Those most at risk for police abuses: BIPOC, unhoused people, people who use substances, and others, are at heightened risk for the abuses that stem from all types of surveillance – including drone surveillance. It is unacceptable for them and for all of us that the NPD can spy on us in this way.”

Bill Dwight, the only co-sponsor of the legislation to restrict police surveillance cameras who is still on city council, did not respond to multiple requests for comment.

The Shoestring has filed a public request for footage and flight information for a drone flight that took place during a May 25th protest commemorating the police murder of George Floyd in Minneapolis and calling for cuts to the police budget. We will update the story accordingly.