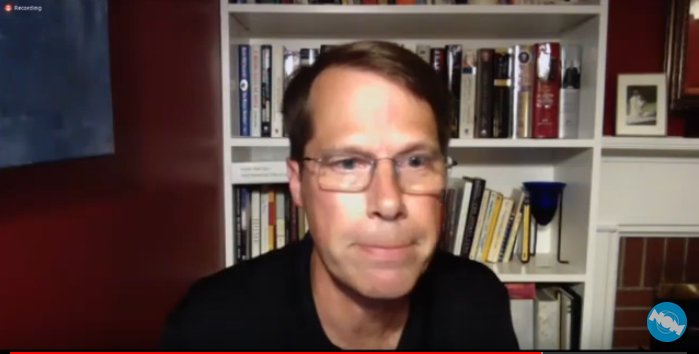 During the 2017 surveillance camera debate, Northampton Mayor David Narkewicz pulled a maneuver that would make it seem like he was banning police surveillance cameras from Northampton. Upon closer inspection, however, it was revealed that the Mayor’s slick counter proposal would create a carve-out that would hypothetically allow police surveillance cameras on municipal buildings. If the Mayor had gotten his way (he didn’t), the activists demanding the city not install police cameras all over town could have claimed victory and the city could still install plenty of cameras. His proposal followed his veto of the City Council’s majority vote to ban surveillance cameras downtown, a vote made after over 3 months of an outpouring of public comments and engagement with councilors supporting a ban. The council ultimately voted against the Mayor’s veto and proposal.

On Monday, he announced a counter proposal to the police budget. Instead of increasing the budget by $193,579, which sparked condemnation and outrage at last Wednesday’s budget hearing and Thursday’s Council meeting, he announced that he would be reducing the total police budget by $19,066 (0.28%) “out of respect and deference to both public and City Council concerns.”

In order to reduce the budget, the city will buy two hybrid police cruisers instead of five and will cut the $8,072 training budget item. The step raises that the budget increase had initially paid for will still be issued.

Because the Council’s vote during last Thursday’s City Council meeting was rescheduled due to the fact that it was nearing 2 a.m., the Mayor’s new budget has been proposed before the City Council likely had the chance to fully communicate their thoughts and positions on the police budget increase to the Mayor or their fellow councilors.

“After initially proposing to increase the police budget, the Mayor’s latest proposal to reduce it by just 0.28% over last year does not come close to addressing his constituents’ demands,” Jess Johnson, a Northampton activist told The Shoestring.

“From the beginning, we have refused to support any proposal that allocates more city funds to legitimizing the police through liberal markers of ‘improvement’ like green technology,” Andrea Schmid, an organizer at the Pioneer Valley Workers’ Center and a speaker at Saturday’s protest, told The Shoestring. Adding that, “Narkewicz’s new proposal to reduce the number from 5 vehicles to 2 is insulting. It clearly shows he does not have the courage or imagination to move beyond the narrow neoliberal framework that allows people like him and Chief Kasper to stay in power.”

Johnson says that the hundreds of residents who showed up to last week’s Zoom meetings are asking the city to defund from policing and invest in the communities that have been most impacted by policing. “We want alternatives to policing, housing for all, education, harm reduction, senior services, public health, climate change solutions, and more.”

“The Mayor’s 0.28% budget cut of the police department is an affront to those struggling with Covid-19 related issues during the pandemic,” Gabe K., a local nurse, told The Shoestring.  “As a registered nurse and soon to be nurse practitioner, the voice from my patients is that they are suffering and they are financially unstable,” he said, calling on the city to defund and disarm the Northampton Police Department.

In his email to Council President Gina Louise Sciara (At-Large), Narkewicz wrote: “Finally, and most importantly, I realize that our world has changed dramatically since I submitted this budget on May 18, 2020. I am committed to working with the City Council to address the larger systemic issues of institutional racism and bias laid bare once again by the tragic killing of George Floyd by Minneapolis police officers on May 25, 2020.”

The Shoestring reached out to Mayor Narkewicz to ask how he would address these larger systemic issues of systemic racism if he would only commit to cutting the budget by 0.28%. He didn’t respond before we went to press.

This revised budget will be discussed tomorrow, June 10th during a special City Council meeting at 5 p.m.