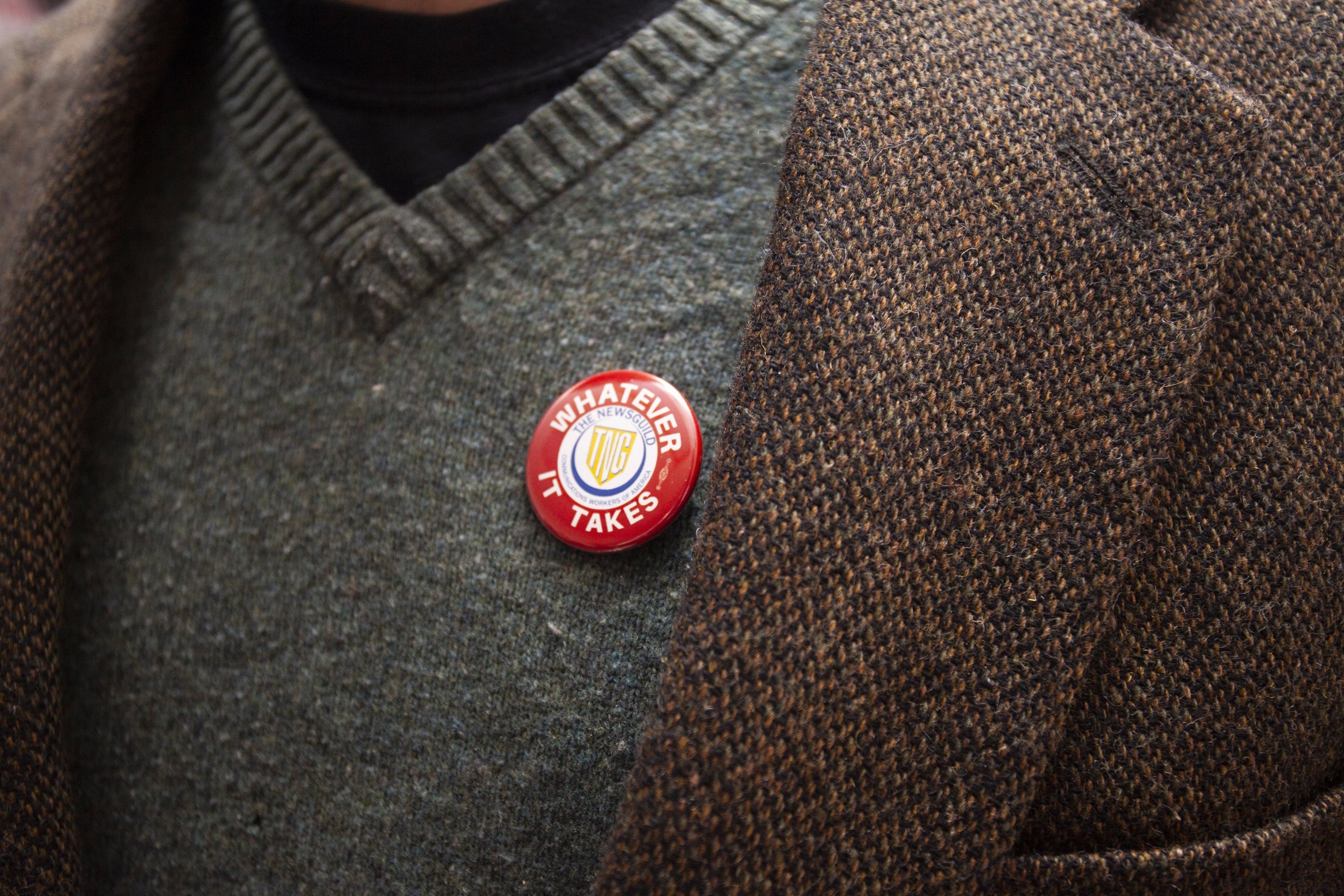 Gazette employees say they’re forming a union “one way or another.”

Management says a union will “erode” the paper lol.

By Will Meyer [Full disclosure: I am a freelancer with the Valley Advocate.]

On Monday, employees of the Daily Hampshire Gazette and the Valley Advocate presented a petition to management asking them to voluntarily recognize their union. Composed of 70% of all eligible employees across the building, workers of the two newspapers formed the Pioneer Valley News Guild.

“We hope that [management will] voluntarily recognize our union and see the clear supermajority of support that we have — the widespread support across the building, through every position in the building — and want to start this collective process with us,” Gazette staff reporter Dusty Christensen told The Shoestring. The other option, he said, is to file for an election with the National Labor Relations Board. “We’ll win that election.”

“People are getting used to this new normal of being open and out about their support of a union,” Dane Kuttler, a Classified Advertising Representative, said. “It’s going well. Morale is high. People are getting used to the fact that we’re allowed to talk about it at work, which for a long time was very undercover.” Adding that: “[This] doesn’t mean that we’ve won, it doesn’t mean that we’ve achieved victory. It means we get to speak the truth aloud in public with people who have our backs and that’s everything.”

Kuttler and Christensen were clear: “one way or another,” they both said in separate interviews, the union is going to go through.

“As far as I can tell, management is adhering to federal law. I have not received any reports of people being harassed or approached by management,” Kuttler said. “Right now it is a little bit difficult, because we’ve been working so hard for this momentous thing going public, and now we’re here, the ball is in management’s court.”

In an email to The Shoestring on Monday, Gazette and Valley Advocate Publisher Michael Rifanburg, who, as this publication has noted before, is on the board of the Chamber of Commerce (a business advocacy group), wrote, “We think the world of employees at the Gazette who all work hard every day to make the Gazette a great paper. It’s premature, however, for us to comment at this time.”

Aaron Julien, the CEO of the Gazette’s parent company, Newspapers of New England, strongly opposed the union, saying it would “erode the paper.” In a letter to staff that leaked to NEPR, Julien deployed a series of vacuous and intellectually depraved arguments he easily could have plucked from the Gazette’s anti-union editorial page. He tactfully suggested that: “As a family owned newspaper, we’ve always tried to do what’s best for you and the communities our publications serve.” He even had the gall to suggest that, in the face of several recent layoffs, “we are trying to do things humanely and fairly.”

The best (knee-jerk) reason he could come up with to support his claim that a union would “erode” the paper was that: “A union brings the risk of strikes (which is the last thing we need here) and the almost certainty of your paying them monthly dues.” Another was that, “Among other factors, it would mean we no longer have the ability to deal directly with you about your employment terms.” He emphasized that the current arrangement allows for a “critical flexibility to treat each of you in a way that’s sensitive [to your individual needs and circumstances].”

But that last claim would fall flat on its face given the context in which the union was started. Both Kuttler and Christensen noted the union’s origin story: Last year, a scandal involving gender pay disparity reached a fever pitch and national headlines, and executive editor Jeff Good was ousted. The incident produced a big win for workers in the form of a transparent pay scale that is now presented to every new Gazette employee, undercutting the idea that allowing management to “deal directly” with workers is a good arrangement for them.

“In the wake of the discussions around fair pay last year, a group of employees got together and said we need to take this a step further, and the idea of a union emerged from that,” Kuttler said.

The conflict both prompted workers to begin talking more openly about their workplace conditions — and how they could improve — and also pointed to a concrete example of how a union could be useful in the the workplace. “It was so incredibly helpful to have that example, to say: ‘Well, remember last year when…those reporters came together and confronted management about pay disparity in the workplace. It was incredible, and they actually got something done,’” Kuttler said, noting that, “It was an easy way to bring up the idea of solidarity.”

And that’s what they did. “We began to talk to our co-workers across the building, including in departments that didn’t typically interact with one another,” Christensen said, “about our working conditions, our concerns, and our struggles — but also about our dreams and hopes for the future in this collective endeavor of ours.”

The Gazette and Valley Advocate employees organized with support and assistance from Newsguild-CWA organizer Malcolm Emerich, based out of New York City. Over the course of the year, Emerich would help facilitate meetings and give the employees pointers on how to organize their co-workers. “This sort of thing doesn’t happen overnight, it really does take a village to accomplish this sort of thing,” Christensen said. The Newsguild has some 25,000 members across North America, including in Canada and Puerto Rico.

The Gazette union is part of a wave of unionization hitting the media industry. “People are increasingly recognizing the vital need for more unions in this country, and that is playing out in media organizations across the United States, whether it be digital outfits or newspapers like the L.A. Times or the Chicago Tribune,” Christensen said. Emerich told NEPR that he is getting calls from other papers after the news of the Gazette’s organizing drive went public.

What distinguishes the Gazette’s union from others in the media industry is that it is a “wall-to-wall” union, meaning that it includes employees from throughout the company, such as printing press workers, custodians, photographers, editors, writers, and advertising staff. “We made ourselves very clear from early on: We wanted to form a wall-to-wall union with everyone who works at the Gazette and Valley Advocate and everyone who’s affected by the deterioration of working conditions,” Christensen said.

The Gazette, which is the oldest paper in Massachusetts, has never had a successful union until now, Kuttler noted. “In our discussions with co-workers, we had been told that there had been efforts to unionize,” she said. “Nobody could be totally specific about when that was or what exactly happened or even who was involved. There was a lot of built up mythology around ‘Oh yeah, we tried that, it didn’t work’; or ‘someone tried that and then they got fired.’”

Beyond fighting for better working conditions, more transparency, and more equity at work, the employees are also fighting for more democracy. “I don’t know that many people associate the words union and democracy with one another. It’s not necessarily a part of the standard narrative, but it’s one that we have driven from the get-go,” Kuttler said. “All of our major decisions have been made by vote,” she added. “By and large, we have moved democratically. We even decided with our co-workers when it was OK to use the word union.”

She concluded: “Not everybody in this union is best friends. One of the things I found so inspiring about the work is that people who might otherwise get into disagreements or not even know each other at work have kind of come together incredibly around this. I have made friends through this process. I have connected with my coworkers. I feel the solidarity building. And that changes a place.”

“No matter what happens this place has already changed. We say hello to each other differently.”