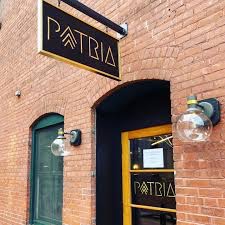 Patria, a new fine-dining establishment in Northampton, opened its doors last year in the midst of the pandemic by western Massachusetts natives Aaron Thayer and Abby Fuhrman. Thayer, a chef classically trained in French cuisine and a former chef at the now defunct Easthampton restaurant Coco & the Cellar Bar, came back to his hometown after stints cooking under award-winning chefs in San Francisco and Boston. When the restaurant opened, the press fawned over the couple’s towering ambition and difficult dishes, such as “tempura maitake mushrooms with aerated Humboldt fog.”

Nearly a month later, Patria remains closed. As of Sunday, November 21st, a message on the restaurant’s website read, “We are currently closed, please stay tuned for updates.” Reservations through the site Open Table appear to be completely unavailable at the time of writing.

The Instagram post dated October 27th offered the following explanation: “Every home, including ours, has ups and downs, unforeseeable challenges, and moments where the path forward is not as clear as we would like.”

“This past week saw the unplanned departure of some very valuable members of our kitchen staff. Moving forward without them requires that we reassess and reset. In spite of the challenge it poses, it is an opportunity to take in the praise as well as the criticism and move forward with renewed vision and energy. We thank you for your understanding and support.”

The Shoestring received a tip about an altercation that happened between Thayer and his sous chef Patrick Lipscomb early in the morning of Thursday, October 21st.

Through a public records request, The Shoestring obtained the police report documenting the situation. The report states that, according to Thayer, the incident started because of “an argument regarding Lipscomb’s work performance.” While the police report implies discrepancies between Thayer and Lipscomb’s side of the story, police note that Thayer is the “owner of the restaurant” and Lipscomb “an employee.”

The situation escalated. According to Lipscomb’s account to police, “Thayer began charging after him, and threw a punch using his momentum, striking him in the left side of his face. Bruising was visible on scene.”

Thayer, on the other hand, maintains that both men “exchanged punches” and told police that “Lipscomb then grabbed a wooden rolling pin and tried to strike him 3 times with it, but missed each time. After the struggle stopped, Thayer stated that Lipscomb threw the rolling pin at the shelving and mirror behind the bar, striking and breaking several glass alcohol bottles which were scattered on the floor.” Lipscomb admitted to breaking the glass bottles but contradicted Thayer’s claim and denied trying to strike Thayer with the rolling pin.

When reached by phone, Lipscomb declined to comment, telling The Shoestring that he didn’t want to “further agitate the situation.” Multiple attempts to reach Thayer by phone proved unsuccessful.

According to police, “Thayer stated that he did not wish to seek any charges regarding the incident or the broken property.”

Andrea Schmid, an organizer with the Pioneer Valley Workers’ Center told The Shoestring in a statement, “It’s harrowing to learn that this happened in our community, and at a time when so many restaurant workers are refusing to return to food service work because of the fact that they receive such terrible mistreatment, and for such little pay.”

Food service workers today are leaving their jobs at twice the national average, and line cooks had one of the highest mortality rates of any profession during the pandemic.

Schmid continued, “All profit that an employer makes is because of the labor of their employees. This incident should be seen as a testament to the deep systemic change that is needed in the industry, if bosses wish to keep their businesses open. It should not be the worker here who is left without a job, but rather a boss who should not have the privilege of owning a business after violently assaulting another human being.”

Will Meyer is co-editor of The Shoestring. Photo: Facebook.