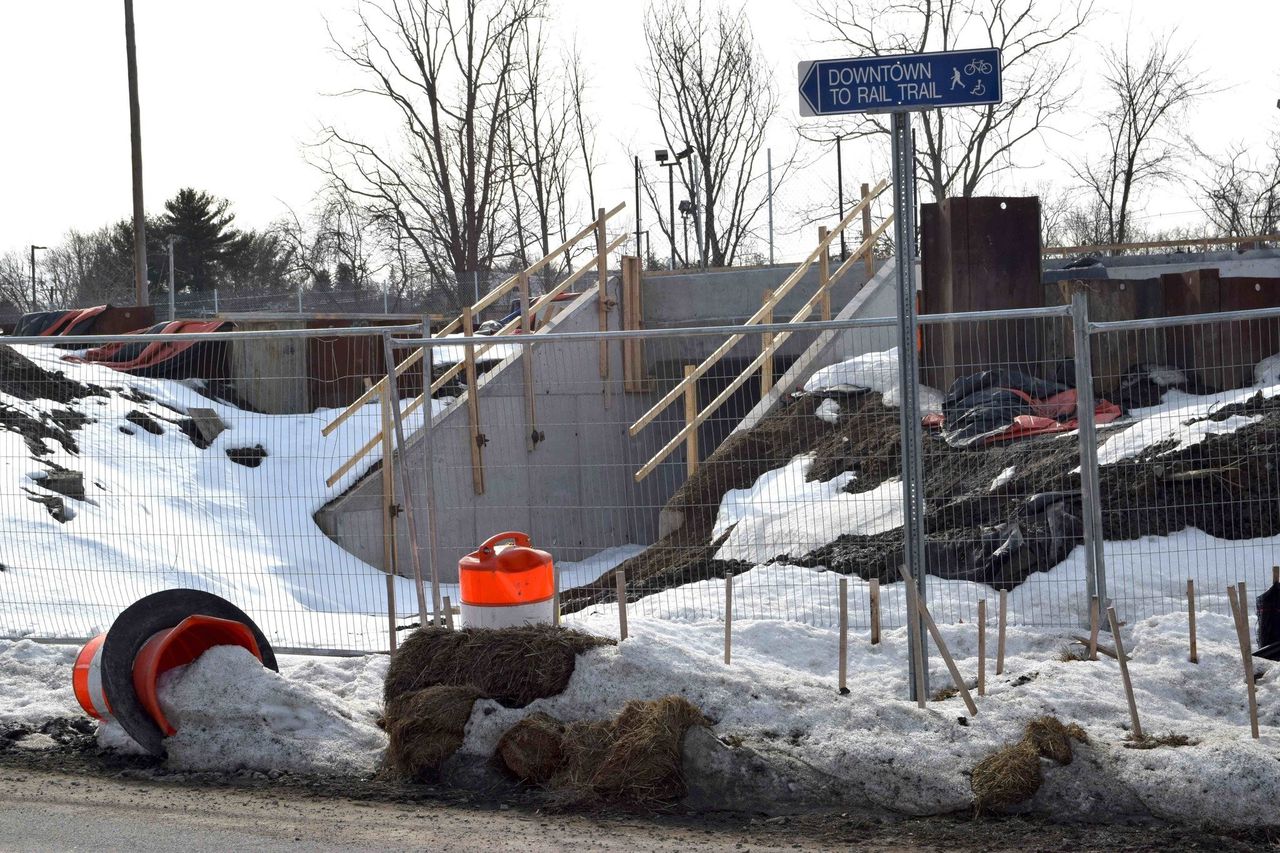 A fire destroyed parts of a houseless encampment along the bike path in Northampton last month, casting a harsh light on the systemic failures facing Northampton’s unhoused residents: such as punitive and infantilizing services, abundant yet unavailable housing, and structural policies that maintain long standing inequalities.

When the pandemic shutdowns began, a local mutual aid network started raising money to provide needed supplies to the unhoused community on their own terms. “We act as a conduit to share hoarded resources including money, housing, and job security with our unhoused neighbors,” read a mission statement from Touch the Sky. “Through building relationships we aim to meet the individual needs of unhoused people.”

The blaze, apparently started by a propane-powered heater, was more than an unfortunate accident: it was the last link in a chain of policy failures that left people sleeping outside in the dead of winter at all. The fire sent one individual to the hospital and destroyed the belongings of several others who already struggle to find basic human necessities on a daily basis. Touch the Sky raised money to provide them with shelter, meals, supplies and financial support. The group was also able to rent motel rooms for the displaced people during the winter storm, and plans to help cover medical costs for the person sent to the hospital.

Meanwhile, area shelters are also providing unhoused people with food and shelter, but on strict and infantilizing terms, according to those with firsthand experience. In many cases residents must be sober and follow an enforced curfew or be asked to leave. The mayor’s office explained in an email to The Shoestring that following the Jan 31st fire, everyone who needed and accepted help had their needs met.

“Mayor Narkewicz has been aggressively using every resource available to help our local service agencies provide food and shelter to our at-risk residents,” said Alan Wolf, the mayor’s chief of staff. “At this point, we are told by our social services partners that everyone who wants the kinds of shelter we are able to provide – either the congregate shelters at First Churches or Grove Street or in hotel rooms for those unable for any reason to be in congregate settings – has it.”

Some unhoused individuals have not taken the City’s help, Wolf said, but Touch the Sky members say others in their community have sought shelter and were unable to find it. They reject the “paternalistic” nature of established organizations that force unhoused people to give up their autonomy, a sentiment that Touch the Sky members work to address through their organizing. What began as a housing-oriented mutual aid effort amid the pandemic called PV Housing Now, Touch the Sky changed their name after a series of cookouts and community conversations with the unhoused community. Those conversations helped shape the mission of the group, a self-described “network of unhoused & housed people, organizers, workers, students, and artists dedicated to mobilizing resources in the Pioneer Valley.”

“Our initiatives grew out of direct requests and knowledge from unhoused people,” the mission statement says. “We know that unhoused and housing insecure people can and must lead the fight to end houseless-ness and poverty.”

The group believes that houselessness is a political problem that could easily go away if the city and state would better leverage resources to eradicate it. With the money spent on organizations like Servicenet, which was audited for misuse of around $91,000 in unauthorized expenses in 2019, people in need could instead receive direct financial support to stay out of poverty and out of shelters. Meanwhile, Wolf said that Northampton, Holyoke, Springfield and Greenfield have addressed the worsening housing crisis by opening more shelters.

“If there is an upside to the pandemic, it’s that a coordinated regional effort in the four counties of western Massachusetts has resulted in enough capacity for sheltering and food systems have received significant support,” Wolf said. “This effort means there is still open shelter capacity in our area for those who want it.”

At the same time some of these organizations seemingly dedicated to human welfare are pursuing eviction cases against their low-income, disabled and at-risk tenants during a global pandemic. The Friends of the Homeless Inc., the Northampton Housing Authority, Servicenet, and the CEO of Servicenet herself—a multi-property landlord named Susan Stubbs—have all filed cases against their tenants in housing court since the state moratorium ended in October. Stubbs had since settled the case in court mediation with the tenant who was ultimately not evicted.

Mutual aid organizers believe policies that promote affordable housing and prevent large property owners from leaving units vacant for long periods of time would better address houselessness. Touch the Sky shares these sentiments with another activist group called Northampton Abolition Now, which formed over the summer in the midst of the racial justice protests to organize around prison and police abolition. They are currently circulating a petition calling on the city to reallocate 50% of the funds from the police department towards community welfare programs.

As Shoestring reporter Brian Zayatz explains in recent feature on the city’s policing commission, “Napkin math would suggest that housing 50 people for one year at the local average 1-bedroom rate of $1300 per month would cost $780,000, which is less than was cut from the police budget in the spring and much less than the amount of free cash the city has on hand.”

On top of what could be cut from bloated police budgets, cities and towns are now eligible for a 100% reimbursement from the Federal Emergency Management Agency (FEMA) for emergency services required during the pandemic. Costs eligible for reimbursement include “non-congregate” and domestic violence shelters, meaning the city could have been fully reimbursed for the cost of emergency motel rooms for unhoused people since January 21.

As of Feb. 19 Touch the Sky had raised $25,625 from over 500 donors. According to the organizers, 50% of the funds they raise will go to individuals in need of financial assistance and 10% will go towards general food and supplies. The rest goes towards the vision of a future drop-in center where unhoused people can access food, clothing, hygiene products, medicine, and access the internet as needed.

“After speaking to many unhoused and housing insecure people in and around Northampton, there was an overwhelming request for a drop-in center in downtown Northampton,” read the fundraiser description. “It will also be a safe place for unhoused people to organize, find relief from harsh weather, temporarily rest and take breaks, use the restroom, and store their possessions.”

The city of Northampton also has tentative plans to open a “Community Resilience Hub” this year, according to Wolf. He made no mention of the mayor’s “Panhandling Work Group,” a collection of business owners, local officials, and social service providers that The Shoestring first reported on in April 2018. No unhoused people or panhandlers were part of the work group.

In addition to monetary donations, Touch the Sky can use donated supplies like tents and heaters for their members. Other forms of support include helping members find and secure employment, co-signing on an apartment, and help navigating the various forms of government and nonprofit assistance.

“With or without a pandemic, being unhoused is a full time job,” the fundraiser reads. “One which requires carrying belongings with you all day, finding and maintaining places to sleep free of police harassment, making sure you have enough money for food & water, protecting clothing and tents which continuously get damaged, and on and on. Utilizing the sparse state resources requires time, internet, charged technological devices, and transportation which are all obstacles to unhoused people as they work all day to survive.”

You can donate to Touch the Sky here.

CLARIFICATION: The story has been updated to reflect that Sue Stubbs had since settled the case in court mediation with the tenant who was ultimately not evicted.

Sarah Robertson is a regular contributor to The Shoestring.