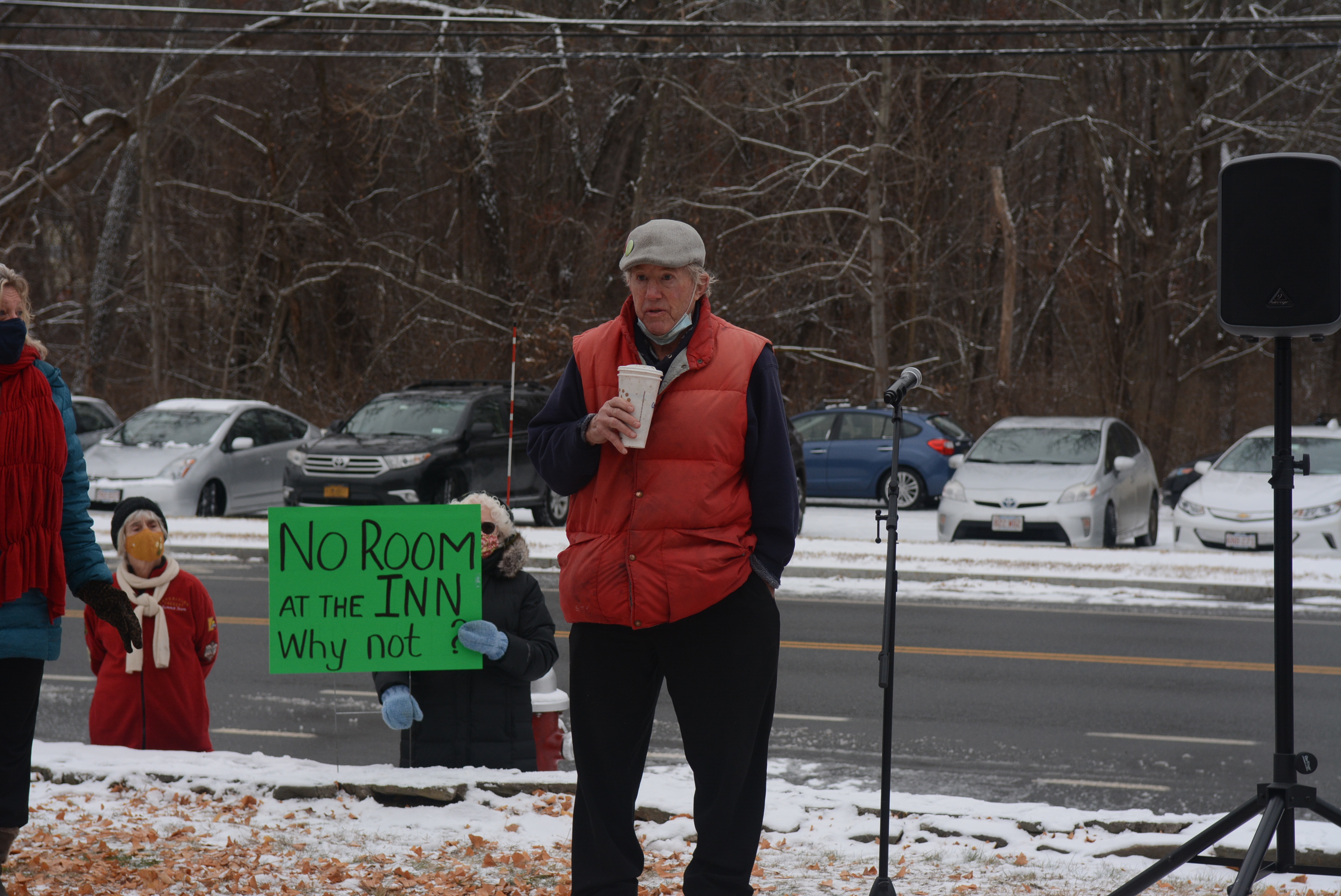 As temperatures drop, resources for the unhoused are stretched thin

[Editor’s note: an earlier version of this piece appeared in the Montague Reporter]

GREENFIELD – Sub-freezing temperatures and snow are forecast through next week for Franklin County, and the area’s only overnight shelter available to people experiencing homelessness is at capacity. While various measures exist to provide emergency relief for individuals sleeping outdoors, local activists are calling for more to be done to address what some are calling a crisis of housing and human welfare.

“Many people that are on our waitlist are living with friends, family – the phrase is ‘couch surfing’ – doubled up, but there are a small portion on the waitlist that are living rough,” ServiceNet program director Erin Forbrush said at a public meeting last Thursday convened by the Franklin County Sheriff’s Opioid Task Force. “So that’s where we put our priority…. As a shelter provider, this is an issue we deal with every single winter.”

ServiceNet operates the shelter on Wells Street in Greenfield, currently at capacity with 30 people staying there each night. Conway activist Mary McClintock asked Forbush why the agency has not increased the number of shelter beds they offer, if there have not been enough in Franklin County for many years.

“I certainly echo the need to have more beds,” Forbrush said. “It’s just a matter of being able to get the funding, and the location, and going through all the other processes when you find the location.” Forbrush noted that it took ServiceNet more than three years to secure the Wells Street location, and 10 additional beds were added at the beginning of the pandemic.

“I know there has been money to put people in hotel rooms that hasn’t been used,” McClintock said. “What I hear is that if you go to the shelter and there isn’t room, you’ll get put someplace – that’s what I hear from the shelter providers, and I trust they’re not lying…. But what I hear on the streets is, that doesn’t really happen.”

When there is no room at the shelter, ServiceNet’s policy is to connect people seeking shelter with motel rooms, paid for either by federal vouchers or other social service organizations. The Interfaith Council of Franklin County recently agreed to help cover the cost, according to council member Amy Clarke, a responsibility that has historically fallen to the Salvation Army.

Clarke said she urged the Salvation Army to continue the program into 2022, but that as of last Thursday they hadn’t paid for any hotel stays.

“I feel terrible about it,” Clarke said. “People are giving us money, because they’re so concerned about people being out in the cold.”

The Emergency Housing Voucher program, a federal program established under the American Rescue Plan Act (ARPA), can also cover temporary hotel stays. According to the Department of Housing and Urban Development website, the Franklin County Regional Housing Authority (FCRHRA) has received 15 such vouchers, and has issued six.

Forbrush said that staffing issues are affecting ServiceNet’s ability to meet the community’s needs. The agency is currently advertising for dozens of positions in Hampshire and Franklin counties, including a full-time Shelter Housing Specialist with an annual salary up to $35,000 and a part-time Direct Care Residential Counselor at $15.75 per hour.

Pamela Schwartz, director of the Western Massachusetts Network to End Homelessness, cited a “crisis” regarding salary levels at housing organizations statewide. “Until the state pays more, and raises its rates for staff,” Schwartz said, “people are looking down a very dark tunnel of not having the support and assistance that’s necessary.”

Some attendees asked in the remote meeting’s chat room about immediate assistance for people sleeping outside, including someone who was pregnant. Schwartz said that pregnant women are eligible for emergency assistance shelter administered by the Department of Housing and Community Development. For unhoused people infected with COVID-19, an isolation and recovery site was recently reopened at Quality Inn in Northampton; the rooms can be accessed via area shelter providers.

“We’re at an amazing time right now, in terms of dollars going into housing,” said Jay Levy, regional manager of Eliot Community Human Services, Inc. “I’d be hopeful that this is the right time, with the pandemic and everything else going on, to turn this crisis into a great opportunity to reach these other regions.”

Levy said that Eliot Services is stretched thin helping people in Greenfield and Turners Falls, with just one employee in Franklin County, and that there are currently no shelters serving the North Quabbin area.

“There have been times when we’ve relocated a person from that area to places that are more resource-rich,” Levy said. “But sometimes it’s very, very difficult. Just to travel there and travel back takes time, and when we get there, we don’t always find the person we’re looking for.”

Cate Woolner, one of several community members who organized a vigil outside the shuttered Farren Care Center in Montague City last month, called on leaders of the social-service agencies at the meeting to act immediately. “The fact that 100 community members showed up on such short notice on Christmas Eve to demand answers – both about the Farren, and to demand an emergency warming space right now – speaks to the community’s urgent concern,” Woolner said.

“If anyone freezes this winter for lack of available warming space, it will be on each of us,” she added. “It’s time to end the hand-wringing.”

Several attendees at Thursday’s meeting cited a projection by experts that funding for housing assistance programs is projected to run out between April and May, raising fears that a long-postponed eviction crisis could push renters and homeowners onto the streets.

Of the roughly $800 million originally allocated to Massachusetts rental aid during the pandemic, $460.8 million has been spent so far, according to the state Eviction Diversion Initiative Dashboard. Advocates are pushing the legislature to use some of the $2.3 billion in unassigned ARPA funds to keep the programs in operation beyond that.

To address issues of inequity exacerbated by the pandemic, housing advocates are urging the legislature to pass the COVID-19 Housing Equity Bill, which would require landlords to engage with assistance programs prior to filing for evictions, and provides protections for homeowners.

Black and Latino populations are overrepresented in the state’s homeless population and eviction cases, including in western Massachusetts, said Keleigh Pereira, program director for the Three County Continuum of Care.

“The systemic issues of wealth disparity, and criminally unjust resource distribution, has really brought into the light an enormous racial and ethnic disproportionality,” Pereira said. “The physical and mental health needs of this vulnerable population were high before the pandemic, and certainly we’re seeing the ways that the systems that are meant to support them were not prepared to respond to this crisis.”

“There is no way for us to track the informal evictions that go on behind the scenes,” said Rose-Webster Smith, program director of Springfield No One Leaves, an advocacy organization staffed by people who have experienced eviction or foreclosure, helping others in western Massachusetts navigate housing insecurity.

“There are no protections at all right now for people facing foreclosure,” Webster-Smith added. “You can apply for funds… but the federal government has not approved the Massachusetts plan yet, so the money is technically not here yet. You can apply for when the money does get here, whenever that happens.”

Webster-Smith told the Reporter there are an estimated 28,000 homeowners in severe default right now, not counting those who entered forbearance agreements at the start of the pandemic.

“Those people cannot get assistance from the Homeowners Assistance Fund, because they only will help… owners whose defaults occurred after January 2020,” she said.

The Homeowners Assistance Fund (HAF) is a federally-funded program administered by a consortium of state housing and finance departments. Webster-Smith said that Way Finders, the counseling agency helping homeowners process applications in the region, is receiving over 100 applications a day with a six- to eight-week processing period.

Recent changes to the way the state processes applications for the Residential Assistance for Families in Transition (RAFT) program have also made it harder for some tenants to receive benefits. Applicants must be behind on rent, instead of just at risk of falling behind, to apply; the maximum benefit has been reduced from $10,000 to $7,000; and households can no longer automatically reapply.

“It was not meant to handle this volume at all, whatsoever,” said Webster-Smith. “If you don’t know how to fill out that application, if you’re not technically savvy, the chances of you completing that application are slim to none, because in the new central application you cannot save. Every time you start and you don’t finish, you have to go back and restart.”

In Franklin County, many housing assistance applications are handled by the FCRHRA.

“Demand has increased over the last few weeks, we are approving over 25 applications a week, and currently processing applications that were submitted in the last week of November,” executive director Gina Govoni said. “We are still recruiting staff to assist with this temporarily, and we have staff available in Orange as well to assist clients who cannot apply online or make it to Turners.”

According to Govoni, Massachusetts started diverting all RAFT applications to the HAF program last month, which “has caused some confusion among homeowners facing foreclosure.”

“We remain concerned about homeowners who are falling through the cracks, either because they have non-mortgage delinquencies (most often, utilities) or are not far enough behind to qualify,” Govoni wrote. “There is no longer a way for these folks to access the RAFT program online.”

“We are extremely nervous there is another crash coming in the market,” Webster-Smith said. “Western Mass never recovered from the first one, so it’s going to be very, very hard for us to recover from the second one…. Until we go back and change the systemic issues that housing is built on, we are never going to truly have housing as a human right.”