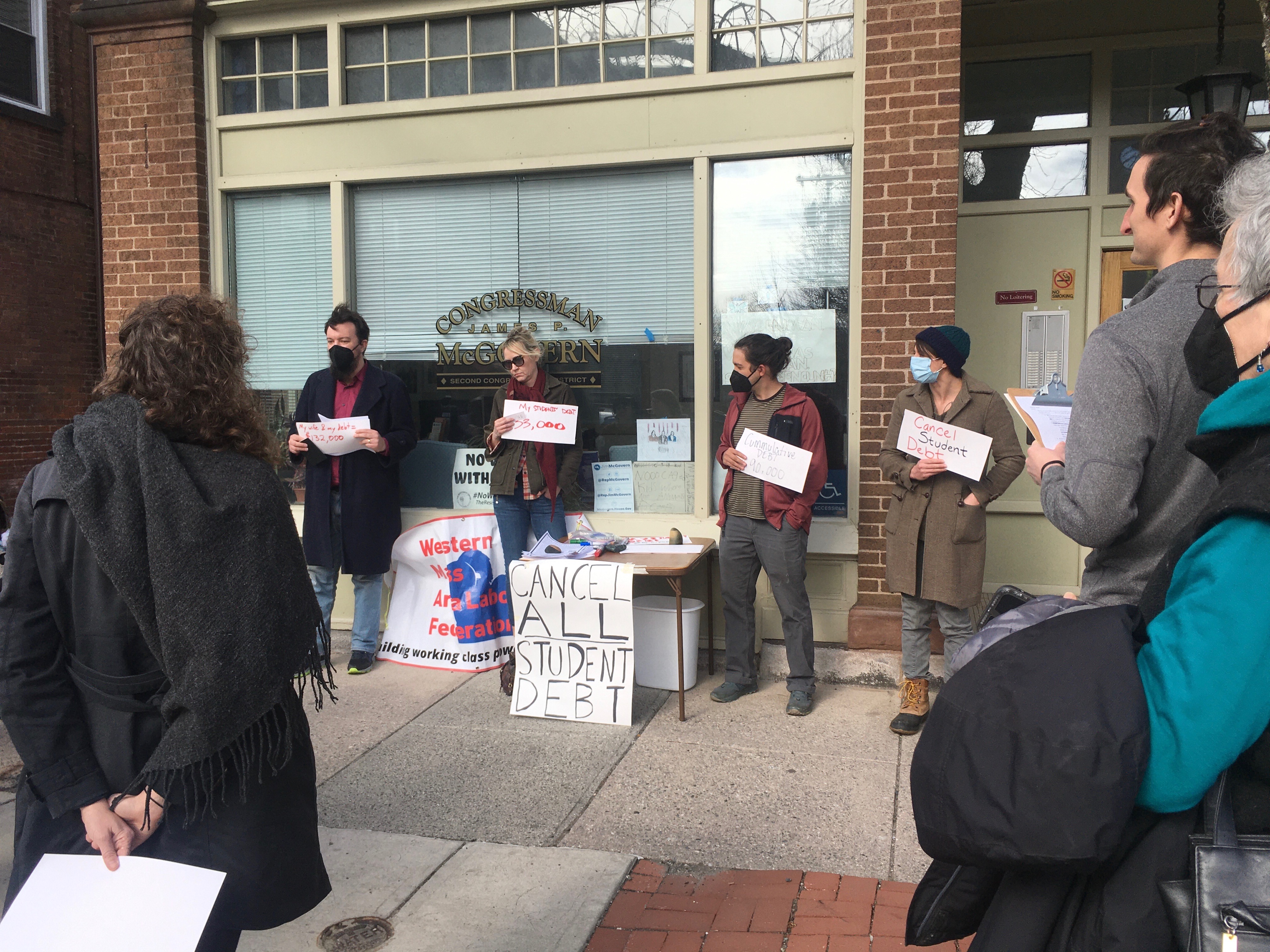 Days after activists rallied in Northampton, Washington D.C. and across the country calling for the cancellation of all student loan debt by executive order, the Biden administration announced a payment freeze for federal student loans would be extended for another five months.

“The White House did not extend the payment pause out of the goodness of the president’s heart,” Astra Taylor, co-director of the Debt Collective, told The Shoestring. “For years, debtors and their allies have had to fight for every penny of relief they have received, and this latest news is no exception.”

Student loan payments were expected to resume on May 1st, but on Wednesday the pause was extended through August 31st. The New York Times reported that 35 million people have not been making student loan payments since the pandemic relief measure went into effect two years ago, and that this announcement marks the sixth time the payment freeze has been pushed back.

“The moratorium was extended not only because of Covid, and the economy being in shambles, but because a growing cohort of regular people like us got together and amplified the demands for extending the moratorium,” said Liam Gude, a member of the Massachusetts chapter of the Debt Collective.

Monday’s rally was part of a nationwide day of action coordinated by the Debt Collective, a self-described “debtor’s union” with membership open to anyone affected by financial debts. Activists from more than 70 organizations rallied outside the Department of Education in Washington D.C.on Monday while the smaller contingent gathered outside of McGovern’s office in Northampton and other rallies took place in Boston, New York City, and elsewhere across the country.

“Student debt is a punitive tool of social control, and a policy choice that targets and effectively punishes the working class, working poor and poor students, particularly students of color,” said Ian Rhodewalt, a member of the Western Mass Area Labor Federation, which co-organized the rally and recently passed a resolution calling on Biden to cancel student debt.

Around 25 people attended Monday’s rally and spoke about their experiences with student loan debt. They wrote how much they owe on scraps of paper and ceremoniously burned those before leaving signs and messages about debt forgiveness hanging on Representative Jim McGovnern’s office door.

Among the attendees was Janell Tryon, a doctoral student in the English department at UMass Amherst.

“Mostly my debt has prevented me from creating a safety net,” Tryon said. “As I get older and think about what it means to be in partnership or potentially start a family, my debt looms large. It is an immense and unpredictable burden.”

Tryon has $250,000 in federal and private loans and pays between $700 to $1,000 per month on her private loans. Even after negotiating a lower interest rate through Navient, the private lender, Tryon says she has been pushed into forbearance a number of times.

“I’ve rarely been able to pay down principal balance, and my overall debt amount has soared,” she said. “I have never had a savings account for more than a year at a time, and I have no retirement to speak of. It has also meant not being able to help my family with expenses.”

She was the first person in her immediate family to attend college, taking out her first loans when she was 17 years old to attend New York University.

“My family situation shifted and within two years, I had no co-signer and began to fund my education with private loans—all the while being encouraged by NYU to do so, rather than being given any encouragement to seek additional scholarships and grants,” she said. “I always worked through school—often multiple jobs—but it never covered my cost of living.”

Another attendee, a woman in her 70s, said her friend’s Social Security checks are being garnished over unpaid student debts.

The Higher Education Act of 1965 gives the president the authority to unilaterally cancel all federal student loans by executive order, without Congressional approval. While Biden campaigned on forgiving a limited amount of student debt, the president has not shown that he intends to use this power.

During his campaign, Biden promised to help ease the “inequitable burden of student loan debt” which  “contributes to the stark racial wealth gap that exists in society.” He said he wanted to immediately cancel a minimum of $10,000 of debt for every federal student loan borrower, forgive debts of students defrauded by for-profit colleges, make public colleges tuition-free, and pursue other debt forgiveness measures, but has yet to follow through on these promises.

“The action in Washington on Monday and the local solidarity actions were part of a flurry of momentum-building organizing that has happened since the previous payment pause was announced in December,” Taylor said. “The latest extension is a victory for our movement but it is nowhere near enough. A pause is not a solution to a crisis.”

The U.S. Department of Education did recently forgive $415 million in student loans to around 16,000 students who attended DeVry University, claiming the for-profit college had defrauded students by advertising much higher job placement rates than were actually observed.

“We need full student debt cancellation and we needed it yesterday,” Taylor said. “Turning payments back on August 31 is morally bankrupt and it would be political malpractice with the midterms approximately two months away.”

The Debt Collective advocates for the renegotiation and abolition of debts, access to publicly-funded goods like healthcare and housing, and for governments to adopt anti-racist economic policies. Their goal is to ease the disproportionate burden that economic debts place on society’s poorest and most disadvantaged people.

“It has been incredibly inspiring to belong to a group of activists who refuse to seek student loan forgiveness, who know that we deserve cancellation and an apology from those predatory loan companies that continue to wield immense power over our financial stability and mental health,” Tryon said.