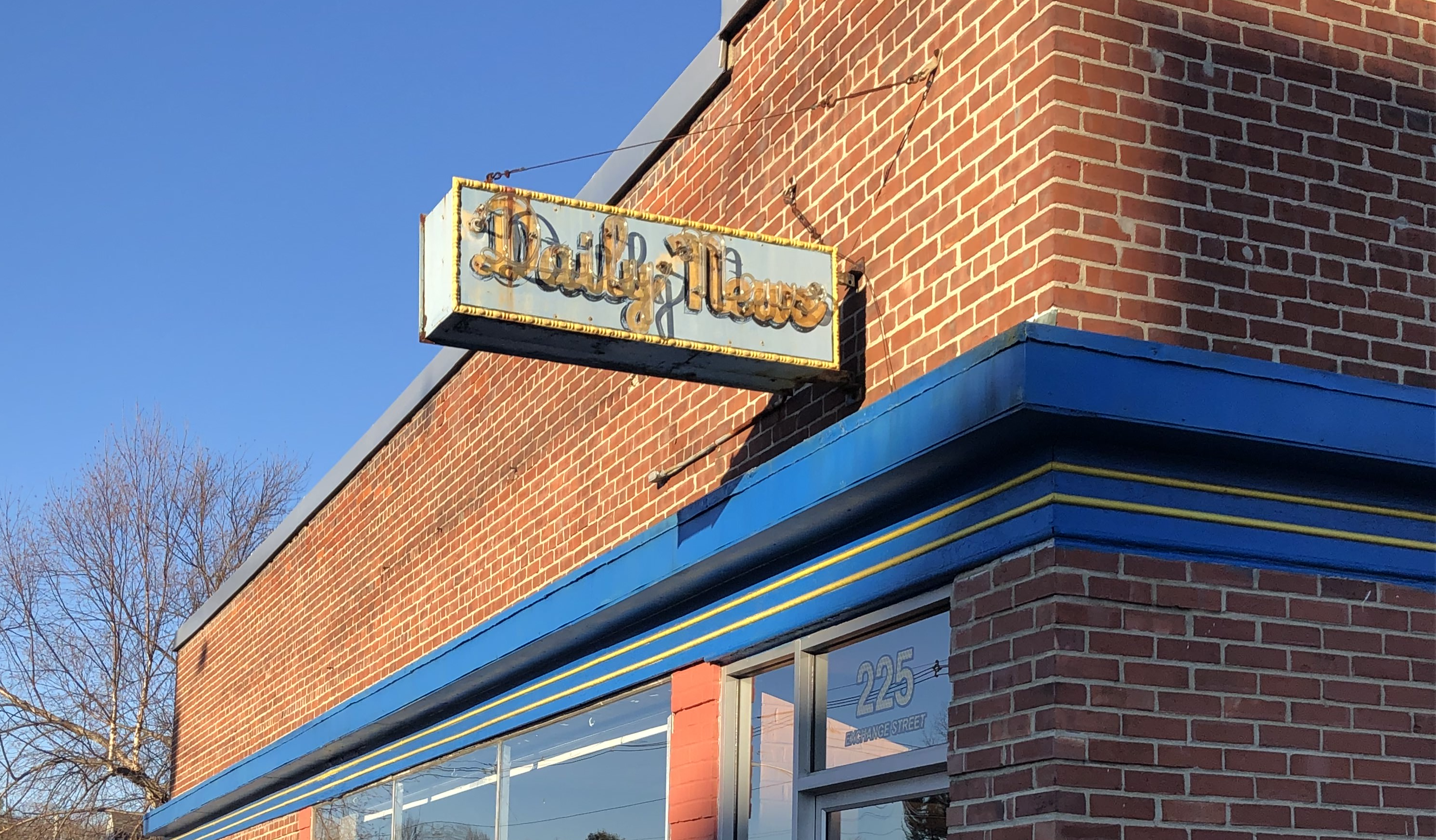 Another strike against local journalism in Western Mass.

This article initially ran in the Montague Reporter.

ATHOL – Two years after acquiring the Athol Daily News, the regional newspaper chain Newspapers of New England announced on Tuesday that it is closing the paper’s downtown office and laying off more staff members at two other daily newspapers in the region.

“We spend every day working hard to be innovative to create a sustainable business model,” publisher Michael Moses told the Reporter. “We’re living in some strange times, and I don’t think hyperlocal news and community dailies have ever been more important. So that’s our mission: to sustain those products.”

Management announced the layoffs just weeks before Christmas, around the same time of year that the Daily News’ former publisher, Richard Chase, announced the sale of the paper in 2017.

“I think it’s a shame, to tell you the truth,” said David Small, president of the Athol Bird and Nature Club and chairman of the town’s planning board. “It does seem that ever since they were bought out they’ve slowly – well, not even so slowly – they’ve really cut back on the number of employees covering news, and I think it shows.”

In an email to employees on Tuesday, Moses wrote, “As you may know, earlier today we eliminated positions in various departments at the Athol Daily News, Greenfield Recorder, and Daily Hampshire Gazette. Although we’ve made tremendous progress over the past year, we have not been immune to the advertising revenue challenges that all newspapers have experienced.”

Based in Concord, NH, Newspapers of New England (NNE) publishes the Recorder, the Gazette, and the Daily News, as well as the Valley Advocate, Amherst Bulletin, and four New Hampshire newspapers.

Of the three staff members working in the Athol office, two were laid off and offered freelance work, while one was offered a position at the Recorder, NEPR reported. Two staff members from the Recorder’s office – a West County reporter and an advertising manager – and two non-union staff members at the Gazette were also laid off in the restructuring.

The company announced that it will continue publishing the Athol Daily News, still printing the paper on the press in Northampton, but producing its content from Greenfield. Recorder editor-in-chief Joan Livingston will oversee the Athol publication, which covers nine towns in the North Quabbin area.

Despite the company’s vows to continue the publication, some Athol residents say they are already mourning the loss of their local newspaper.

“ADN was vital to all the North Quabbin towns. It will be missed,” said Athol resident David Runyan. “I’m hoping that a group of people decides to take advantage of the opportunity to assemble a new local paper, perhaps starting as an online version. Sad to see ADN closed, but I think we all knew it was coming.”

“I just really think they need people on the ground,” Small said. “We’ve been fortunate to have a local presence for a long time, and I’m just really saddened that it’s come to this.”

On December 19, 2017, publisher Richard Chase announced the sale of the Daily News, which his family had owned for 83 years, to NNE, and began leasing the office at 225 Exchange Street to the new owners. NNE invited some employees to reapply for their jobs, but let about half go, including the entire printing staff.

The pages for NNE’s Massachusetts newspapers are sent to a shared production desk at the Gazette office in Northampton. In June 2018 another round of layoffs hit the Northampton office, when the company outsourced four positions from its advertising and graphics departments to the Virginia-based media behemoth Gannett, according to a report in the Gazette, to design and place print and digital advertisements for all of its newspapers.

“It’s no secret that these are challenging times for newspapers,” then-publisher Michael Rifanburg wrote in an August 2018 note to readers, as he announced additional layoffs in the features and photography departments. “We just completed a year-long plan to save costs, shifting some resources from print to digital and reducing the cost of producing the print newspaper.”

That November saw a number of additional changes. NNE president and CEO Aaron Julien abruptly replaced Rifanburg as the publisher of the group’s Massachusetts papers a week after a new union, the Pioneer Valley NewsGuild, went public with an organizing drive at the Gazette and Valley Advocate. A week later, the Athol Daily News announced it would reduce publication from six to four editions a week.

Moses, who joined the company as vice president of sales and marketing that November and succeeded Julien as the newspapers’ publisher last May, explained why the experiment ended after a few short months. “When I got here, I thought that was a mistake,” he said of the decision. “We wanted to stabilize the paper, and the market, and serve the community, so we went back to six days.”

Athol Public Library director Jean Shaughnessy said the Daily News publishers responded to some readers’ criticisms in reversing the decision. “It was a very rough transition, and mistakes were made,” Shaughnessy said. “I think if it had been a smooth transition… they wouldn’t have lost so many subscribers.”

The Athol newspaper now reprints much of its content in the Greenfield Recorder. Despite the recent downsizing, Shaughnessy said she appreciates the newspaper’s continued coverage of the library’s events, and hopes the coverage continues from Greenfield. “Any publicity that the library needed or wanted, they always did nice stories,” she said.

No further changes to the publication will result from closing the Athol office, Moses said, except for the reduction in full-time staff members. “At this particular junction, I feel comfortable with the staff we’ve got to produce at six days a week,” he said.

Reporters from the Athol newsroom have been invited to keep contributing on a freelance basis. This reporter was told last year that the Daily News did not pay more than $50 per freelance article, while the Daily Hampshire Gazette pays entry-level freelancers around $75 per article.

“My focus is, with our budgeting, to create a model where we can invest in news gathering, because that’s our product,” Moses said, “regardless of how folks are digesting it, whether it’s print or digital.”

According to the publisher, NNE’s commercial printing operations in Northampton and Concord are doing well. “It is a healthy revenue stream for us, and it certainly helps us support other areas of the company as well,” he said. (The Montague Reporter [where this story initially ran] has been printed at the Gazette press since 2012.)

Moses said that tariffs placed last year on Canadian newsprint turned out to be a non-issue for the company, despite a public warning by Rifanburg that they would strain the bottom line. The tariffs were lifted after a few months, and since then the cost of newsprint has come down.

Instead, Moses blames the cuts on the universal challenges faced by small newspapers: declining readership and declining advertising revenues. Newspaper staffing levels decreased by 47 percent nationwide between 2008 and 2018, according to a Pew Research Center study.

NNE continues to contract work out to the Gannett network, which finalized a $1.1 billion merger last month with GateHouse Media, becoming the nation’s largest daily newspaper holder. The conglomerate owns the USA Today network and publishes around 260 daily newspapers in the US, including the Gardner News to the east of Athol and the Worcester Telegram & Gazette to the south.  [Eds. note: for more on the Massachusetts media landscape and what this merger means on the state level, see Chris Faraone’s “No News is Bad News” from Boston Magazine.]

While NNE is consolidating its Athol news operation to Greenfield, the bulk of its operations in the state – including the publication of the Amherst Bulletin and Valley Advocate – take place at the Conz Street office in Northampton.

“We have a shared desk because our press operation is here, obviously,” Moses said. “In Northampton, since [2018], we have built out our creative team, so some of the work is done here in house as well.”

Management at the Northampton location is in ongoing contract negotiations with the Pioneer Valley NewsGuild, an affiliate of the Communications Workers of America. The “wall-to-wall” collective bargaining unit, comprised of reporters, press operators, janitors, and other non-managerial Gazette and Advocate staff, was voted in by a 40-29 vote last year.

When the union went public, organizers cited concern over a lack of transparency in NNE’s managerial decisions, shifting job descriptions, and gender-based pay disparity as motivations to organize. The NewsGuild does not represent staff at the Recorder or Daily News.

The Athol Daily News was founded in 1934 when two weekly newspapers, the Athol Chronicle and Athol Transcript, merged to form one daily publication. At the time NNE purchased the newspaper, it had been in the same family since 1941, the year Edward Fairchild bought it from Lincoln O’Brien. Fairchild sold the enterprise to his son-in-law, Richard Chase Sr., in 1982, and he passed the business on to his son in 1989.

“I’m sorry to see it go – I’ve been a supporter of the paper forever,” David Small said of the Daily News’ office closing. “It just feels like the air is coming out of it…. If you don’t have the local staff reporters, I’m not sure how you’re going to be able to cover the Worcester County side of things.”

Years of consolidation and cost-cutting have resulted in “news deserts” throughout the state and country, raising concerns about civic education and local political transparency.

A bill that would commission a study of “communities underserved by local journalism in Massachusetts,” H.181, is sitting in the state legislature right now, written by representative Lori Ehrlich of Marblehead. The study would look into “the adequacy of press coverage of cities and towns, ratio of residents to media outlets, the history of local news in Massachusetts, print and digital business models for media outlets, the impact of social media on local news,” and other factors.

“It’s a spiral,” Small said. “People are not going to renew subscriptions if they don’t feel like they’re being adequately covered.”

“We don’t know how they’ll do it from a distance, but we have nothing else local,” said Shaughnessy. “If you don’t support it, it won’t continue.”

Sarah Robertson is a contributing reporter at the Montague Reporter and The Shoestring, where she most recently wrote about a sulfuric acid leak that killed thousands of fish. She worked as a staff writer at the Daily Hampshire Gazette in 2017 and 2018, and the Athol Daily News in 2018 and early 2019. Mike Jackson contributed additional reporting to this article. Photo by Amy Borezo.