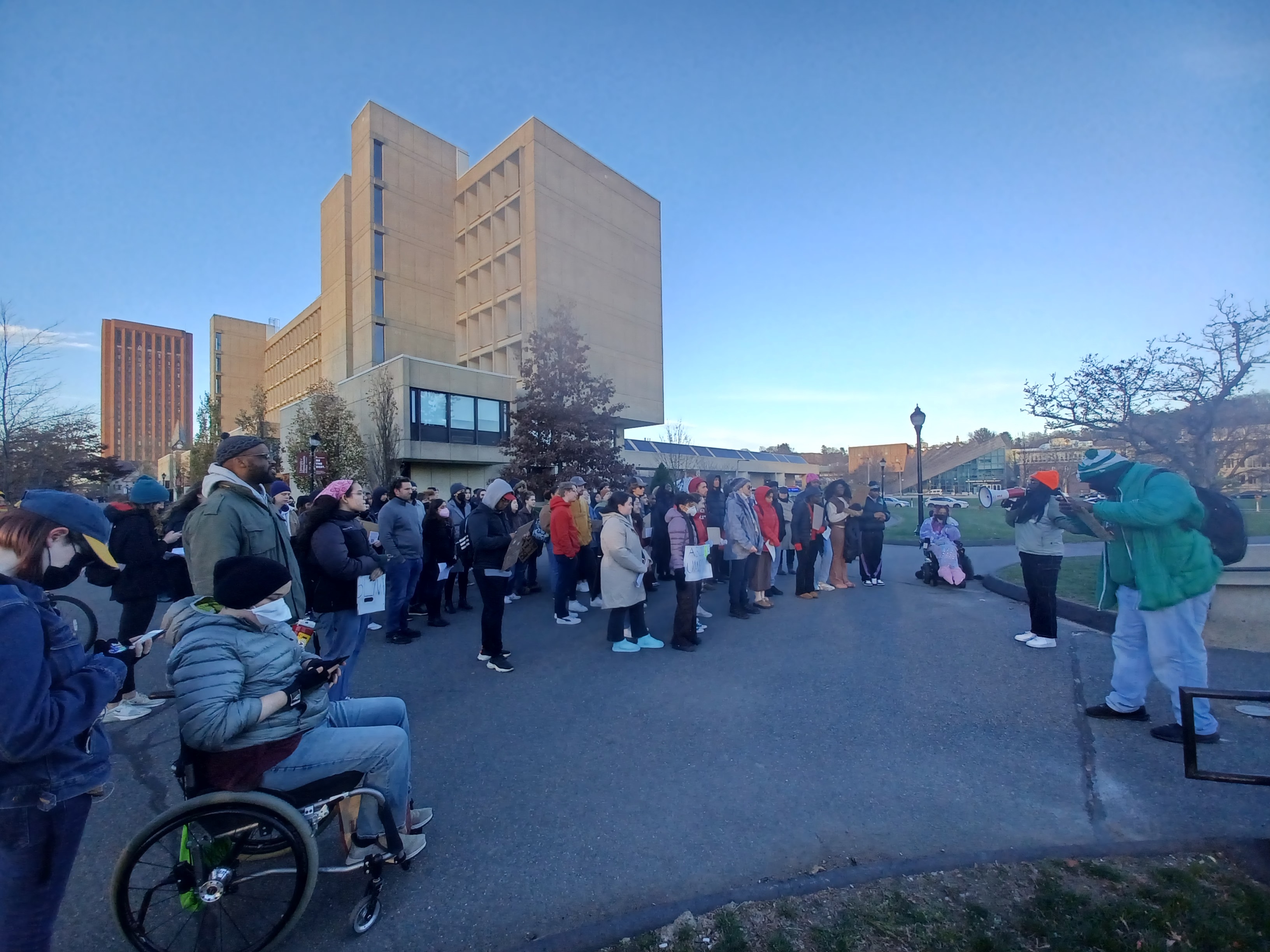 AMHERST – University of Massachusetts Amherst students and faculty are demanding the school drop all charges against a student of color who was arrested and charged with assault and battery on a police officer earlier this month. About 50 people marched into the Whitmore Administration Building on Monday afternoon demanding school officials do more to address the incident, the latest in a string of racist incidents on campus.

“We’re already a small minority on this campus and we’re being targeted for everything we do,” said Bedphiny Deng before leading students into the building. “We’re not safe. We’re not safe anywhere. We’re not safe in our classrooms, we’re not safe on the buses getting to and from places we need to go. How does that make sense?”

On Tuesday, November 1st, a 21-year-old engineering student tried to cross Commonwealth Avenue around a sidewalk construction zone. It was a common occurrence, apparently, because UMass Police Officer Spencer Hotz was stationed there to monitor vehicle and foot traffic.

According to a police report, when the student did not respond to Hotz telling him to avoid the construction area, Hotz grabbed the student’s arm. When he pulled his arm away and continued to walk, the officer grabbed him again and ordered him to stop. As the Daily Hampshire Gazette reported, the student shoved the officer, tried to walk away, and was finally arrested by two officers.

“That’s when another officer comes in and they push him against the cop car. They treated him like a complete slave,” said Dele Osinubi, a friend of the student who was arrested. “There were multiple people walking in that direction and he was the only person of color… When you’re publicly embarrassing someone after class, dog walking them to a paddywagon in front of Mullins Center — this is theatrics, guys.”

The student was arraigned a few days later and charged with assault and battery on a police officer and disorderly conduct. He is scheduled to appear in court again on January 3rd for a pretrial hearing.

“That’s a heavy charge. That’s a felony,” Deng said. “That student’s life has been thrown away just by that simple interaction. That happens all the time for the smallest things.”

Days after the arrest, Chancellor Kumble Subbaswamy issued a statement saying the matter was being “thoroughly reviewed” by an outside agency. Students and faculty at the school had already received a string of racist emails directed at Black and Latino students earlier this year, as the Daily Collegian reported, and days after the arrest, another incident occurred where a PVTA bus driver called the cops on a Black student who had tried to ride the bus with a cup of lemonade, something Subbaswamy also addressed in his statement.

“When I hear an email from Subbaswamy saying this is what happened and we heard some people have concerns, it seems like the same theatrics that happened last year with those emails,” Osinubi said. “You said last year you did an investigation and nothing was solved. What investigation is going to be done this time that’s going to solve anything?”

On Monday, about 50 students and faculty members frustrated by these events marched into the Whitmore building and into the office of Student Affairs and Campus Life in search of the office’s Vice Chancellor, Brandi Hephner Labanc. Instead they found Sarah Littlecrow-Russell, an assistant to the Vice Chancellor for Student Affairs and Campus Life, and Cheryl Ponder, the interim Vice Chancellor for Advocacy, Inclusion and Support Programs, and delivered a list of demands. They want to see all charges against the student dropped, body cameras on all UMass police officers, better race and equity sensitivity training, and a safer and more welcoming environment for students of color.

“Systems change slowly,” Littlecrow-Russell said, to boos from the crowd. “I would love to be able to see charges dropped. I don’t have control over that…. That is something I would be extremely, extremely relieved to see.”

The protesters asked where Labanc was and took turns sharing their comments and personal experiences with racism to Littlecrow-Russell and Ponder, who are indigenous and Black, respectively.

An online petition circulated by the organizers of Monday’s protest calling for all charges be dropped has gathered over 2,300 signatures so far.

“That pipeline from school to prison is so serious and it’s happening in front of us right now,” Deng said. “This man is trying to change his life to become a student to engineer. You don’t know how he was going to give back to his community but now that’s taken.”

UMass Police officers are trained to the same standards as regular police officers, carry firearms, and have the authority to conduct traffic stops and make arrests. UMass spent $6,629,917 on its campus police department in the last fiscal year, which is actually less than the last three years which all exceeded $7 million in expenses. Next year, the department is projected to spend another $7 million or more.