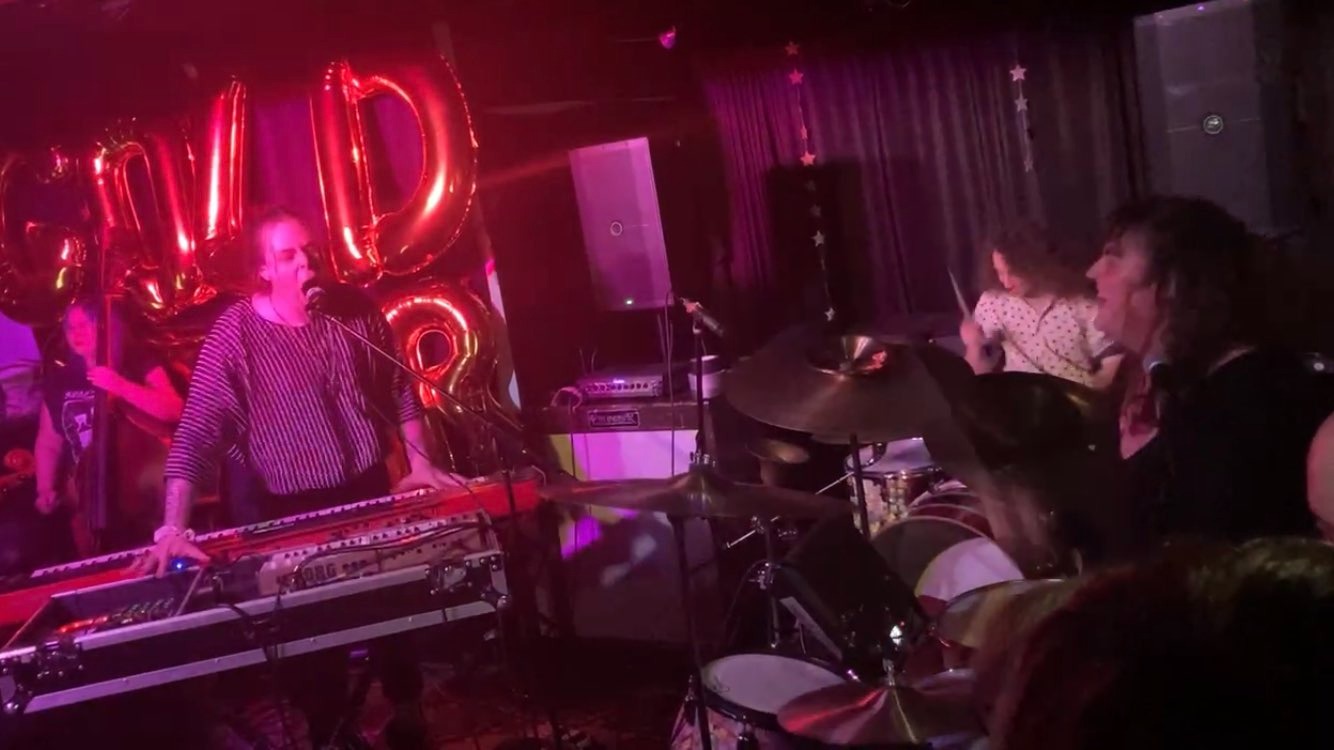 GREENFIELD – There are some shows that make you feel grateful to live in western Mass. Hadley’s Fourth of July shows are often up there, or the February 2020 Bucket show at the Asbestos Farm, the last show many of us went to before the pandemic hit, when drummer Ryan Severin made his return to the band, and everyone agreed, before we even knew what was coming, that that show felt different.

There’s often an element of surprise when a show like this happens, but maybe I’m just speaking from a place of ignorance: I was probably one of the only people at Space Camp’s album release show last Friday at 10 Forward who had never seen them before. I’d never seen any of the bands on the bill that night, which also included Rong and Bricklayer, both from Boston.

But Space Camp have been something of a local legend for some time now, so I had a good feeling. Their t-shirts, featuring bold calligraphy and a black-and-white image with the contrast maxed out, are perhaps more frequently spotted on locals than any other band from the area, and it seemed like they used to play just about every show at The Flip when it used to be on North Maple Street in Hadley. (I always figured I’d catch them next time.) Plus, my friend Ben said he was going to buy me a beer for quitting my day job, which was more of a night job.

I didn’t end up getting the beer, but I did get a cool new nickname courtesy of Rong vocalist Olivia W-B, who strained to remember my name. You can call me Brahms now. Not long after that, as a crowd accumulated that I would’ve been happy with if I had booked the show, Rong took the stage with fast-n-loud lefty punk and zany antics.

Olivia did a headstand at the front of the pit while their bandmates played on, and bassist Max Goldstein periodically jumped off his sizable amp for emphasis, at one point passing his bass into the crowd. Drummer Adric Giles donned a Halloween mask, and guitarist George Hooper’s hands zipped up and down the neck of his guitar like he was starting a lawnmower.

The resulting sound was as energetic and noisy as a lawnmower, but who cares about lawns? With their shrieked lyrics about how Milton Friedman sucks and having to pay to use public bathrooms, I’m guessing not Rong.

Some friends and I went hard in the pit. Olivia took a moment to shout out a victory that Rong and other tenants had just won after the owners of the Sound Museum, one of the last affordable practice spaces in Boston, announced that they would all be evicted with little notice. We all cheered for tenant organizing, and I noticed the crowd had grown substantially. After their set, I heard the venue was at capacity.

I went outside for a breather and came back in for Bricklayer, which some of my brother’s friends were pretty excited about. The band is fronted by Emily Carter from OroborO, a bygone western Mass band that had also played the old Flip frequently. With two drummers, a bassist, synthesizers, a guitar, and vocals, they played a party pop once again evolved from punk, the progeny of a marriage between Muse and Rubblebucket.

I had to hang out on the sidelines for this set while I recovered from being tossed around during the last one, which gave me a great vantage point on the group of skilled musicians. Drummers Cole Hancock and Corey Camara made playing an uptempo 6/8 in sync on two separate sets look easy, and the crowd danced along in time.

Then, Space Camp. Bandleaders Daisy Josefa (vocals, drums) and June Violet Aino (vocals, synths, trombone) took the stage along with the “Space Camp Orchestra,” consisting of upright bass, cello, and baritone euphonium, as well as Max from Rong, this time on a second drumset behind Daisy’s. The crowd whooped as they soundchecked.

How does one categorize something with thunderous, gloomy synths, screamed vocals, and low brass? On Bandcamp, Space Camp have tagged Gold Star, the album released on Friday, with “punk,” “hardcore,” “queercore,” “hell,” and “connecticut.” I can’t think of anything more fitting.

What is so special about a band like Space Camp and their unclassifiable genre is that you either get it or you don’t, and the music becomes a vessel for community. Rejected by label after label, Space Camp can still sell out a show to fans who appreciate them as they might a culturally specific fermented food which, by design, isn’t for everyone.

For those who acquire the taste, rewards await. Space Camp’s sludgy maximalism feels like it’s coming from inside one’s own body, like a childhood Fourth of July parade drumline with much better politics. The significant presence of face masks and earplugs communicated that this was a crowd that cared about ourselves, and each other. The pit is about pushing people around, but it’s also about picking people up when they lose their balance.

I can’t promise you that seeing Space Camp will make you a better person, but I know that Friday’s crowd of mostly queer punks is who I want to see around me at a show – and who I’d want to wade into carrying a fuzzed-out electric mandolin and microphone, if I were in Space Camp, to scream a finale. Even if tastemakers and gatekeepers won’t make space for Space Camp in their worlds, there will always be room for them in the ones we make together.

A version of this article was published in the January 19th, 2023 edition of the Montague Reporter under the title “Space Camp and Friends Fill 10 Forward.” Photo courtesy of Mike Jackson.