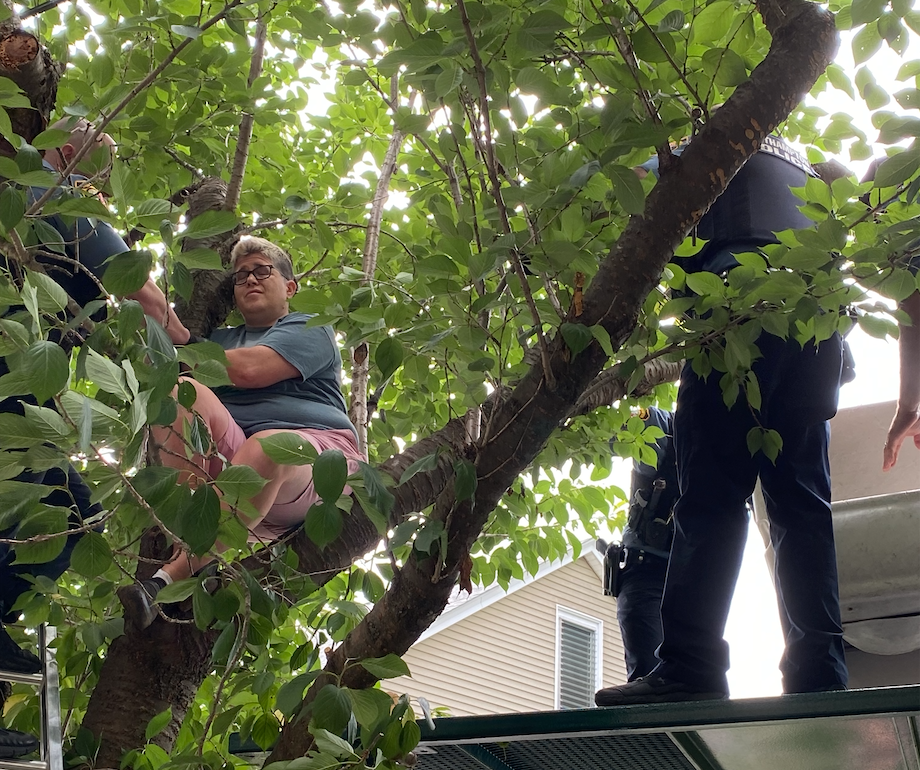 Residents of Warfield Place, a quiet side street in Northampton that has become the center of a fight to save a row of cherry trees, were roused Thursday morning by the sound of heavy equipment moving onto their street and legally parked cars being towed around the corner.

The city notified the neighborhood nearly three weeks ago that construction on the street, which had been selected for repaving, could start imminently. Residents, who have sought more input on the work scheduled in their neighborhood since they were notified of the city’s intentions in April, requested that the city give at least twenty-four hours’ notice. Thursday morning’s surprise represented the culmination of the neighborhood’s anxiety over the ensuing months. By 1pm, nine trees had been removed.

Witnesses described a rushed scene using “shock and awe” tactics, comparing the turnout to a SWAT team. “Obviously the orders from Donna [LaScaleia, DPW Director] or whoever was like get this done, cut these trees down, don’t stop for anything,” said Oliver Kelhammer, a resident of Warfield Place. “And even the way they were working was rushed and sloppy compared to any other tree operation I’ve ever seen,” he continued, calling it “dangerous to the public, and to the workers. Nobody was wearing chainsaw chaps. The only guy wearing chaps was the guy operating the rake.”

Indeed, the work occurred so fast that The Shoestring could not make it to the scene in time. Witnesses reported that twenty to twenty-five police officers were present in at least five cars, as well as at least one state trooper, a fire engine, and an ambulance, in addition to Northern Tree Services’ personnel and equipment and a tow truck.

The residents fighting to save the trees had hoped to have enough notice to come up with a plan for the day the city took action. Absent such a plan, many neighbors took out their phones and started recording, calling others, and posting on social media asking for support. Two residents, Liz Gaudet and Kathryn Young, climbed two of the trees and were subsequently removed by Northampton Police and Fire and arrested. Photos and videos from the incident show workers cutting limbs from the tree only feet away from Young, still perched.

“It’s a show of power,” concluded Kelhammer. “It’s basically saying, ‘fuck you people, we don’t care about democracy, this is what you get when you go against city hall, we’ll cut all your trees down and get you arrested.’”

Concurrent with the city’s show of force on Warfield Place, Judge Mark Mason at Hampshire Superior Court was reviewing a request for a temporary restraining order filed by Kelhammer and fellow Warfield Place resident Lois Ahrens. The order contests the city’s claim that shade tree hearings were not required prior to the trees’ removal because of an exception included in state law. The plaintiffs argue that the exception does not apply because the city was not planning to expand the width of the “highway” that is Warfield Place.

“We were waving [the unsigned restraining order] at the police saying stop this now, because there’s a restraining order on the docket, now’s the time to take a break until this gets cleared,” said Kelhammer. “They wouldn’t stop.”

Ward 7 City Councilor Rachel Maiore, who had of late become an advocate for the neighborhood in the absence of significant action from Ward 1 Councilor Michael Quinlan or either at-large councilor, was also at the scene. Earlier in the week, Councilor Maiore floated the idea of a mediation session between the city and the neighborhood to Mayor Narkewicz’s chief of staff, Alan Wolf, and had been hopeful that the tenor of communications between the two parties could mellow.

On Tuesday, she also met with neighborhood residents to discuss a revised plan that addressed some of the residents’ concerns. “The residents actually liked some things in the plan,” Councilor Maiore told The Shoestring. “It seemed like we might’ve been close to finding something that felt better.” (Kelhammer, Young, and Ruth Ozeki, another resident, also spoke of this plan with mixed feelings. Ozeki noted that the revised plan did not significantly address accessibility concerns in the first plan. Young relayed discussions with Tree Warden Rich Parasiliti about taking grafts of the existing trees and other possible compromises.)

“If we brought in a mediator and cooled the temperature, we could maybe get somewhere and model problem solving,” said Maiore, adding that she was also concerned about the optics for the city. “I thought it’d be a way to redeem the whole thing.”

Kelhammer and Ahrens are still determining if the timing was such that the city violated the temporary restraining order, which was approved that day. “In all probability we will be pursuing legal action,” said Ahrens via email.

Video from the scene shows Gaudet arrested by five NPD officers, and Young arrested by six officers, with at least two firefighters assisting in her removal from the tree. Young told The Shoestring that this was not a planned civil disobedience. On Friday morning, a judge dismissed all criminal charges.

“I thought the city would care about the law enough to wait a few minutes,” said Young, “but it was clear they wanted to cut the trees down as fast as they could. They acted like it was a race.”

Reached for comment, Alan Wolf did not answer questions regarding the significant mobilization of city resources for the tree removal, and refused to add anything beyond what the Mayor’s office already released in a statement. Mayor Narkewicz, Director LaScaleia, and Don Lockwood, the Northern Tree Service employee who oversaw Thursday’s operation, were all “out of the office” on Friday and unreachable for comment on who issued directives to begin removing tree limbs before Young was safely out of the tree.

Due to the surprise with which the city acted, residents did not have time to hold a ceremony for the trees which had been ordained Zen Buddhist priests by resident and priest Ruth Ozeki. Tree ordination is a way of recognizing the sacredness of trees, as well as protecting threatened trees.

“There hasn’t been a lot of precedent [for tree ordination] in the United States,” said Ozeki on a walk back from the police station. Ozeki believed this was only the third instance: the first having occurred in California, also as a means to protect trees which were ultimately cut down, but with enough notice to hold a final ceremony for them. The second was in Texas, where the tree is still standing.

Due to the lack of precedent, Ozeki was reluctant to interpret the city’s actions theologically, but she did not hesitate to call the incident “a sacrilege.”

“Seeing Donna rip the robes off of the ordained trees was gutting to all of us, and so disrespectful,” said Young, who confirmed plans were in the works for a disrobing ceremony.

Ozeki added later that “a primary doctrine or precept of Buddhism is, ‘do no harm.’ And so much harm was done today, to the trees, to the citizens, to the neighborhood.”

Brian Zayatz is a co-editor at The Shoestring. Photo courtesy of Lois Ahrens.