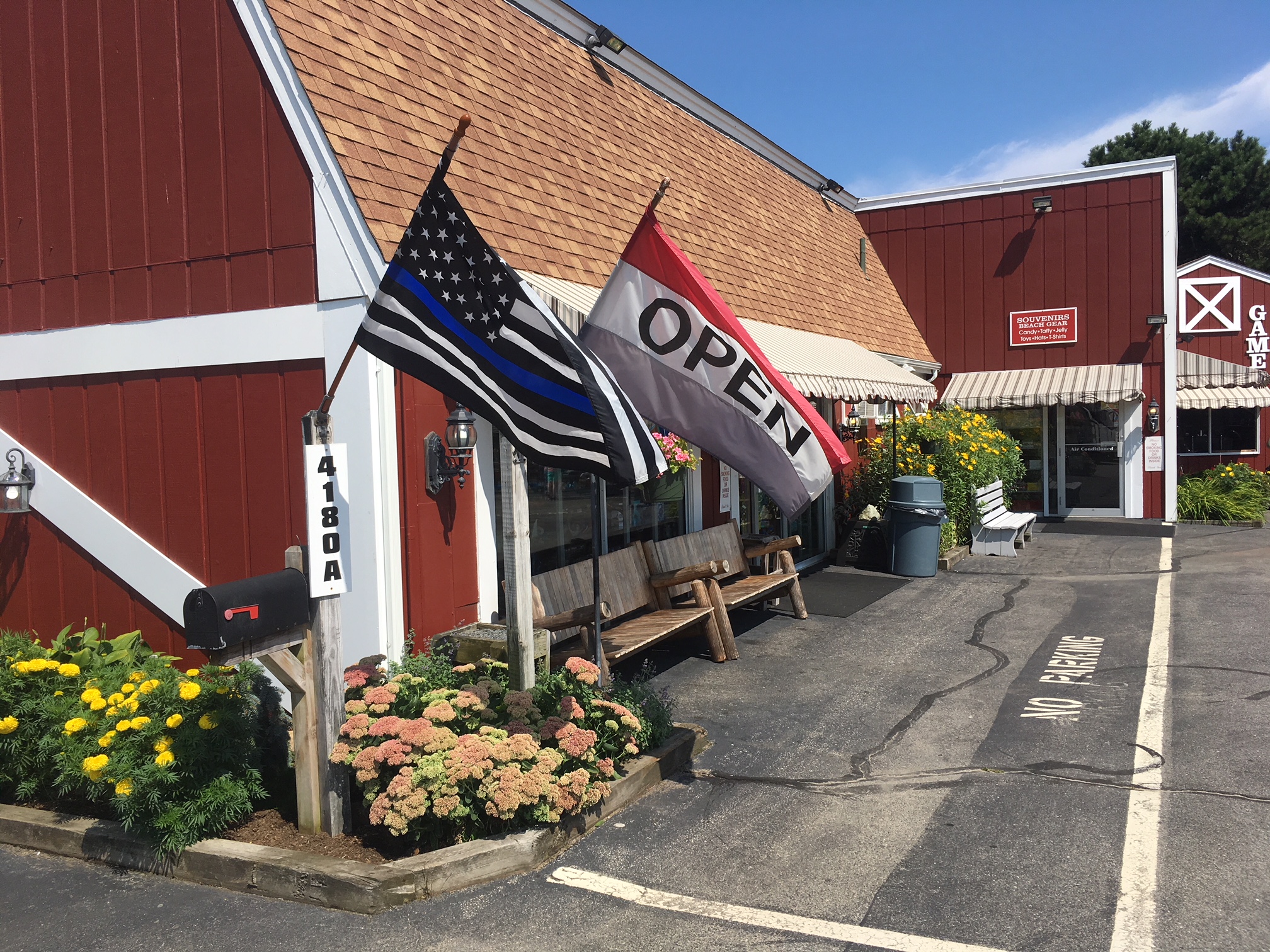 A look at the pro-police flag proliferating in Southeastern Massachusetts

If you’ve visited Cape Cod during this year’s tourist season, it was probably one of the first things you saw. Coming down Route 6, the Cape’s main artery, you start to see them on highway overpasses: Exit 5, halfway between Exits 8 and 9 westbound, Exit 10 eastbound. Into the capillaries of 6A and other streets and byways, you’ll see them on bike trail overpasses, businesses, cars, and homes. The blue stripe flags are taking over.

If you’re from Cape Cod, you might have some idea what this is all about. In the wake of multiple police shootings in Southeastern Massachusetts in recent months, more and more of these symbols, known as the “thin blue line,” have been popping up all over the area as virtuous citizens seek to signal their support for seemingly under-attack law enforcement officers. A Mashpee man, who allegedly attempted to steal flags from the Exit 5 overpass, would be charged with larceny and injury to a memorial (in contrast to whomever has been stealing Black Lives Matter yard signs in Falmouth). At its most prominent, the symbol could be seen displayed in front of ice cream shops, car dealerships, and other businesses from Weymouth to Hanover marking the path of the funeral procession of Michael Chesna, an officer fatally shot in July. Once only an occasional sighting, these flags, bumper stickers, and other apparel have become increasingly commonplace in Southeastern Massachusetts in particular, and Massachusetts as a whole.

Where did this symbol come from, though? Local coverage of the use (or theft) of the symbol gives little if any context of its history or implied meanings, leaving the uninitiated reader to pick up via context clues what is apparently understood by most of these news outlets’ readers. Indeed, despite naming the alleged flag thief’s charges as “injury to a memorial,” the Cape Cod Times describes the flags vacuously as “police-related,” putting the impetus on the reader to figure out, or decide, what the flag means.

For those without time to do the extra research, The Shoestring is pleased to provide a brief history of the usage of the phrase and symbol over the last 70 years.

Though the phrase “thin blue line” had been used in the early 20th century in a rather literal sense to describe formations of Union troops during the Civil War, the phrase was first applied to non-military police until the 1950s, by LAPD chief William H. Parker. A 1992 Los Angeles Times article tracing the history of the city’s police department following the Rodney King beating describes Parker’s department as reformed and media savvy following a period of flagrant corruption, “a crisp, militaristic ‘thin blue line’ (a phrase Parker coined) admired and emulated from coast to coast as it struggled valiantly to protect civilized society from godless communists, murderous thugs and the widespread dangers and decay of modern urban life.”

Yet Parker’s proactive approach to policing essentially meant going out and looking for ‘trouble,’ which meant harassing the city’s black and brown populations. Later in his tenure as chief, the racial implications of the ‘us vs. them’ mentality invoked by the thin blue line metaphor, already clearly understood by the people directly impacted by it, became more explicit. During the 1965 Watts Rebellion, Parker described Watts residents as behaving “like monkeys in a zoo,” and went on television to warn LA’s white residents that “by 1970, 45% of the metropolitan area of Los Angeles will be Negro. . . . If you want any protection for your home and family . . . you’re going to have to get in and support a strong Police Department. If you don’t, come 1970, God help you.”

Despite that (or because) Parker had made clear that the ‘society of law and order’ that the thin blue line protects was a society of middle class whites, the metaphor spread to police departments and their supporters across the country. A survey of usage of the phrase in American newspapers finds that it is used almost exclusively in this way through the 1980s—only occasionally was it deployed to describe single file lines of police for police funerals. Notably, President Reagan used the phrase perhaps with even less color-blind pretense than Chief Parker in 1981 when he addressed a gathering of police chiefs as “the thin blue line that holds back a jungle that threatens to reclaim the clearing we call civilization.”

The symbol itself appears not to have been created until 1993. Blue Line Identifier, Inc. claims to have created and trademarked the symbol, and includes some passive-aggressive remarks on the homepage of their seemingly outdated website about other police officers who are marketing the symbol. The company sells only to verified law enforcement officers, theoretically making it a way for off-duty or retired cops to recognize each other and perhaps share some kind of sacred bond. The website describes the meaning of the symbol thusly: “The blue line represents each of us who daily protect this nation. The black background was designed as a constant reminder of our fallen brothers and sisters. Together they symbolize the camaraderie we all share.” Though the website makes no reference to the symbol the way Chief Parker used it, the identifier was created not long after the release of the Errol Morris’s documentary, The Thin Blue Line, which, despite its critical look at police, further familiarized the public with Parker’s symbology. In the film, judge Donald J. Metcalfe, who presided over the trial of wrongly convicted Randall Adams for killing a police officer, claimed to be strongly moved by the prosecutor’s use of Parker’s metaphor in his closing statement, though the observant viewer might conclude that “law” and “order” had little to do with Adams’ rampantly misconducted arrest and trial.

In contrast to Blue Line Identifier, most other retailers of the symbol do invoke Parker’s symbology. Flags Unlimited, which sells both the classic blue stripe flag and its more patriotic iteration, an American flag rendered black and white with a single blue stripe across the middle, seems to catch every possible interpretation of the flag in its description: “The Blue represents the officer and the courage they find deep inside when faced with insurmountable odds. The Black background was designed as a constant reminder of our fallen brother and sister officers. The Line is what police officers protect, the barrier between anarchy and a civilized society, between order and chaos, between respect for decency and lawlessness. Together they symbolize the camaraderie law enforcement officers all share, a brotherhood like none other.”

Thinbluelineshop.com offers no explanation of the symbol, but its allegiances can be ascertained via its selection of “Blue Lives Matter” merchandise. They complement this selection with a slew of other tasteful products, such as a ring in the shape of handcuffs, a teddy bear that dances and sings “Bad Boys,” and a blanket that loudly proclaims “feel safe at night, sleep with a police officer,” (the blanket neglects to mention that police officers abuse their intimate partners at a rate about three times the national average).

Despite this history, it seems that most of the good citizens of Massachusetts currently displaying the symbol are probably unaware of the symbol’s original meaning, and merely want to show appreciation for police in general and honor to those who have been recently killed or injured in the line of duty. UMass Amherst (whose police chief forwarded my inquiry to the Office of News and Media Relations) claims that the flag is only flown “from the day of an officer’s death to the day of burial.” Chief Patrick Archbald (again, through the Office of NMR) “says the flag has different meanings for individual officers but generally signifies the camaraderie and teamwork of law enforcement personnel and the role they play in ensuring the safety, security and prosperity of the communities they serve.”

The Shoestring also spoke to business owners in Eastham, MA who display the flag, who variously expressed the sentiment that it is a small town, and many of these long-standing businesses have personal connections with friends or family in their local departments. One business owner said that she only became familiar with the symbol as a commonly displayed memorial for Officer Sean Gannon in Yarmouth, killed earlier this year. She ordered a flag and encouraged others in the area to do the same, and apparently many of her customers were not familiar with it, either. An adult daughter of the owners of another nearby establishment, who said she ordered the flag for her family’s business, expressed that “we love police here” and that she thinks the community “all feel[s] the same way about it.”

Given the contested meanings of the symbol over its history in the US, assumed consensus may not be the most solid footing on which to rally a community. Massachusetts police have been documented with a version of the symbol in the shape of the insignia of Marvel comics’ brutal vigilante “Punisher,” cogently illustrating the ways extreme right wing sympathies creep into the political mainstream under the guise of apolitical symbols. As the Cape deals with the aftermath of losing a community member, let us not allow our politics to be colored by the fear or anger through which right-wing ideologies spread, and be mindful of the messages we send, intentionally or not, when we proliferate symbols around our towns.

Brian Z. Zayatz was born and raised on Cape Cod. He now lives in Amherst.