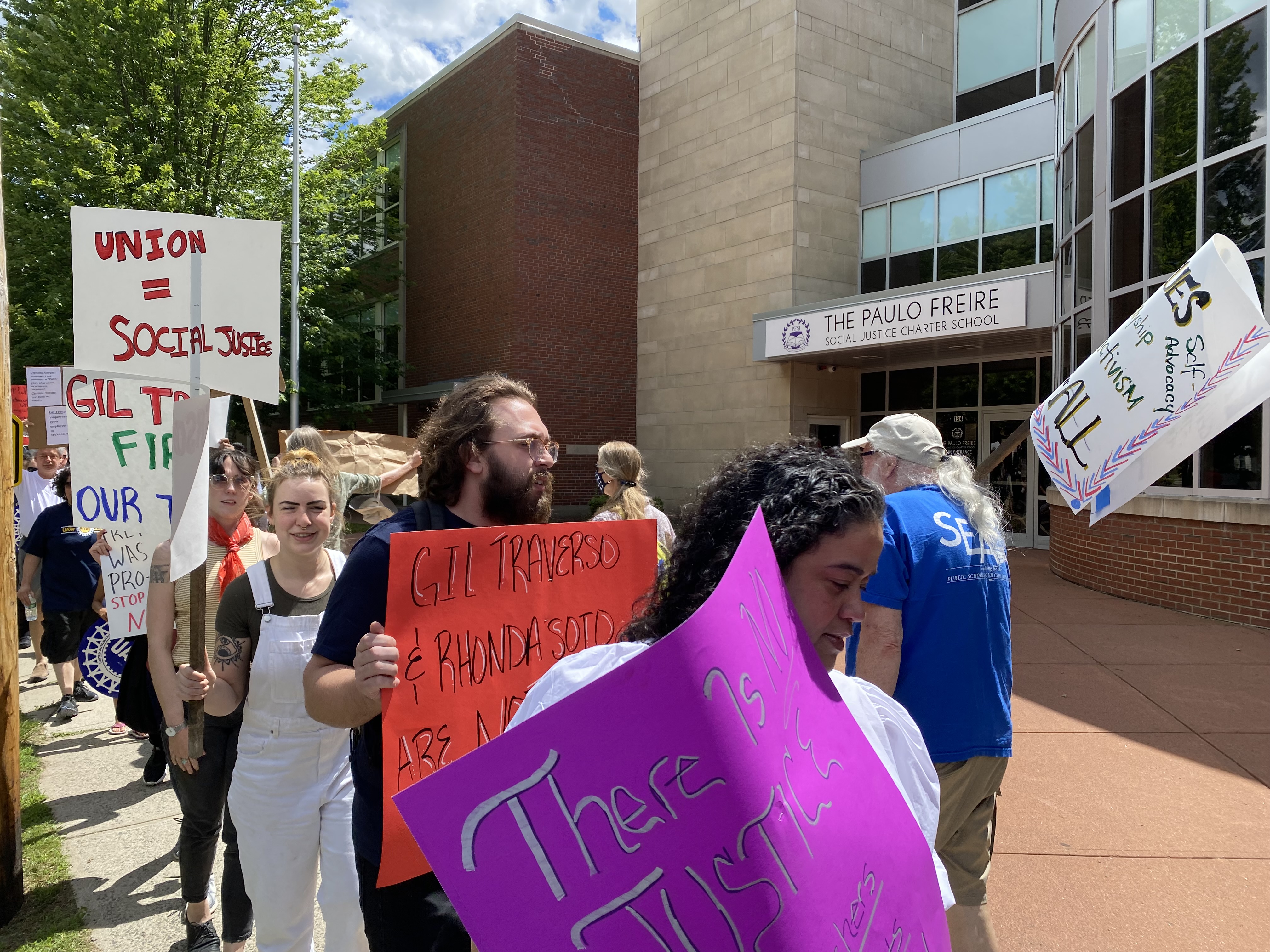 Trustees voted Thursday not to surrender the Paulo Freire Social Justice Charter School’s charter to the state over academic and financial concerns.

CHICOPEE — In a tense meeting Thursday evening, the board of trustees of the Paulo Freire Social Justice Charter School voted not to surrender the school’s charter to the state, which has reportedly told administrators that the school is not viable.

It’s not clear what happens next after the board voted 3-2 to refuse to hand over the charter to the state Department of Secondary and Elementary Education. Reached via email on Thursday, a DESE spokesperson declined to comment and did not respond to a follow-up email early Friday.

“We now found ourselves at this crossroads,” Phylis Gedeon, the board’s chair, said ahead of the vote. She described “looming benchmarks” the school faced amid lagging enrollment and resulting financial struggles — problems she said were long-standing. “It became very cyclical that regardless of whatever we as an administration tried to do, because we had been on a downward spiral — in DESE’s eyes — there did not seem like there was a way that we could come out of that.”

The decision is the latest moment of crisis for the school, which in October saw half of its trustees quit the board in a mass exodus over what the then-president described as “a toxic and hostile relationship between the board and the executive staff.”

In the summer of 2021, recently unionized staffers accused school administrators of union busting after they said the school declined to renew the contracts of all 13 teachers whose contracts had expired that year. The union, organized with UAW Local 2322 in 2020, picketed in front of the building and filed labor complaints with the state. The school, which is named after the leftist Brazilian educator Paulo Freire, is one of only a handful of unionized charter schools in the state.

Gil Traverso, the school’s executive director, did not respond to an email requesting comment on Thursday. Following the board’s meeting, The Shoestring was unable to interview Traverso after security guards escorted the public out of the building and off school property before board members left.

The school has been on state probation since 2018 due to “ongoing concerns related to academic performance and organizational viability,” according to a 2020 state memorandum. As part of that probation, the state’s education board required the school “to demonstrate significant and sustained academic improvement by December 31, 2022.” Other requirements included providing the state with enrollment updates and regular information from the board, demonstrating improvements in chronic absenteeism and academic achievement, and keeping an escrow account “to pay for any potential closing, legal, and audit expenses associated with closure, should that occur.”

“The majority of exiting union members cite fear of retaliation by administration — whether for speaking with their coworkers, asking for basic employment information such as a wage schedule or advocating for students’ legal rights as people with disabilities — as a key reason for exit,” Huben said. “I was put on paid leave 17 months ago and am still on paid leave. To this day, I have not been told what the subject of the supposed investigation is.”

Paul Eggleston, a former teacher, said he too was suspended at the same time as Huben and has been on paid leave since. He criticized the idea that a financially struggling school would pay that much money just to keep union organizers out of the building.

“Paulo Freire would be rolling in his grave if he heard anything like this,” he said.

Zachary Novak, a former teacher who the school let go in 2021, said before the meeting that Traverso’s response to teachers mounting concerns over the school’s “noncompliance with state and federal education law” was to “bully, harass and remove vocal and concerned staff.”

“PFSJ’s failure to correct course is a direct result of the administration’s hostility towards its own teachers and decision to ultimately remove 70% of its unionized staff on the last day of school in 2020 rather than attempt to reach some kind of reasonable accord with its workers,” he said.

‘I’m impressed with the leadership here,” said Hilda Santa, an administrative assistant at the school. “I’ve witnessed a tremendous amount of outside and mostly negative influence affecting the ability of the administration to actually work on addressing the school issues being brought forth by staff and teachers. When the administrative team is busy fighting things from the outside, they can’t find the time or energy to concentrate on the things going on inside the school.”

Several members of the board also expressed support for Traverso, who himself criticized the state’s reliance on standardized testing to evaluate student performance and said the state gave other districts in similar predicaments more time to fix those issues.

“The state said, ‘You are like a charter school that’s in its second year of its operation,’” Traverso said. “And I said, ‘Exactly right. We had to tear down the institution and rebuild it under duress through COVID, under all these multiple barriers we had to hurdle in order to make sure we were moving in the right direction.’”

Traverso said that decision makers now need to think hard about where Paulo Freire Charter School students are going to “land,” saying that if he were a parent he “couldn’t sleep” if his child had to go to Holyoke High School.

At the time that the school moved into that new building, Isabelina Rodriguez was the executive director. A longtime former superintendent of schools in Northampton, Rodriguez told The Shoestring that when she arrived at the Paulo Freire Charter School, the board was dysfunctional and the state was talking about closing the school.

During her time at the school from May 2017 until her retirement in 2020, Rodriguez said leaders were able to boost enrollment — partly by getting out of a warehouse building in Holyoke — and that she welcomed staff unionizing. She described the turnover after her departure as “unbelievable,” but declined to speculate on why the school now finds itself on the precipice of closure.

The school is not closed yet, though. Gedeon explained at Thursday’s meeting that if the board had voted to surrender its charter, it would have had to create a plan to close the school by the end of this term. However, because the board voted not to give up the charter, members will now meet again to discuss their next steps.

“We don’t know what that looks like,” she said. “We’re not aware of what happens after.”

Board members shared their love of the school, and several members said that they wanted to make sure that the school could “land softly.”

“This is democracy in action,” explained board member John Jarvis ahead of the vote.

Unlike traditional public schools, which are governed by elected school committees, community members do not elect charter school boards in Massachusetts.

Ultimately, the board voted 3-2 against surrendering the charter. That decision was criticized by former board president Kevin Dumpson, who after the meeting told The Shoestring that the school should stay open but not under current leadership.

“You can’t save the ship with the folks who sunk the ship,” he said.

This article has been updated to clarify the job titles of Paul Eggleston and Zachary Novak. They are former teachers at the school.