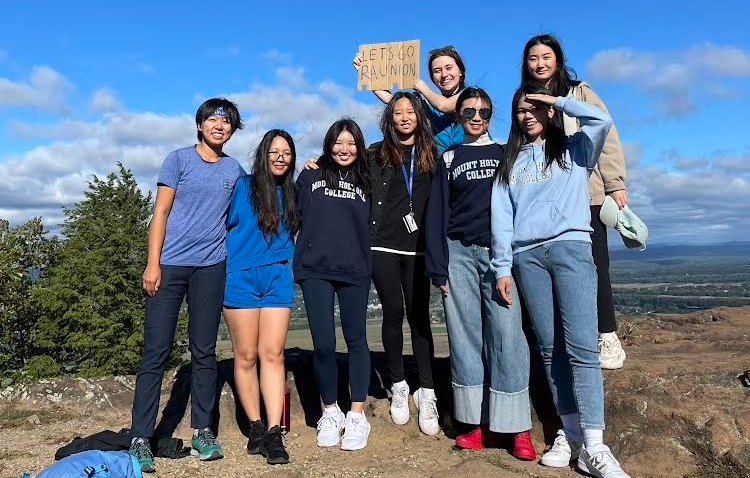 An NLRB election is likely to take place this semester

SOUTH HADLEY — For many college students, dorm life is one of their central undergraduate experiences. On its website, Mount Holyoke College describes living on campus as a way for students to “forge bonds, overcome challenges, be respected for who you are — and grow into yourself.”

But behind the scenes, it takes a lot of work to make that experience a reality. And some of the frontline workers doing that labor are residential advisors, or RAs. During a typical semester at Mount Holyoke, RAs meet with their residents for regular conversations, plan events for them and take shifts being on call on weekend nights, when they’re expected to respond to a wide range of problems.

“This could be anything from neighbor disputes to alcohol poisoning to injuries,” said Delaney Burkhard, 20, who works as an RA at the college. “You are the frontline response to that.”

Now, in order to secure better working conditions and pay for that work, RAs and residential fellows at Mount Holyoke have announced their intent to unionize with the western Massachusetts local of the United Food and Commercial Workers Union, or UFCW.

On Sept. 29, the college’s undergraduate RAs and residential fellows requested that Mount Holyoke recognize their union, MHC Collective, which would be made up of 78 members. The college’s administration declined to voluntarily recognize the union, Burkhard said, meaning that the workers, who also filed union cards with the National Labor Relations Board, will vote in an NLRB-supervised election in the near future to determine if their union is certified.

The work inside residence halls can get “really heavy and really overwhelming,” leading RAs and residential fellows to work more hours than they are compensated for, Burkhard said. Then, during the pandemic, those workers had extra responsibilities added to their plates, she said.

“This is such a notoriously difficult, overworked, underpaid job,” Burkhard said. “Students are finally saying, ‘We can do something about this. We don’t have to just take all of that. We can have a voice in what we want to do. We’re the ones who live in the communities and know what our residents actually need.’”

In a statement, a Mount Holyoke spokesperson said that the college “greatly appreciates the hard work and dedication that our student employees bring to the jobs they perform while pursuing their academic careers.”

“We also support the right of workers to choose what they believe is best for them,” the statement said. “Out of respect for the formal process associated with this request, we do not have further comment at this time.”

Just days after MHC Collective announced their union efforts, RAs at Barnard College in New York City petitioned their school to recognize their newly formed union. Those two union drives were preceded by residential life workers at Wesleyan University in Connecticut, which voluntarily recognized their union in March, and at Grinnell College in Iowa, where the administration also voluntarily recognized a union of “community advisors” — the school’s version of RAs.

“I think we’ll expect to see more of it,” said Clare Hammonds, a professor of practice at the University of Massachusetts Amherst’s Labor Center. She noted that undergraduate-worker unions are rare, but may gain steam as workers in many non-union workplaces like Amazon and Starbucks organize rapidly. “Piggybacking on the kind of unionization efforts we’re seeing around the country.”

Drew Weisse, an organizer with UFCW Local 1459, which is working with the Mount Holyoke Workers, agreed with that sentiment.

“It’s hugely noteworthy to the labor movement that formerly unorganized groups, or specific jobs, are stepping up and staying, ‘We want union benefits as well,’” Weisse said.

The union drive at Mount Holyoke is also happening in a region, western Massachusetts, that for years was home to the country’s only undergraduate RA union at UMass Amherst.

There, RAs unionized in 2002 with United Auto Workers Local 2322, staging sit-ins and protests after the university’s administration initially refused to recognize them as workers and began bargaining. In 2014, peer mentors joined that union and again faced off against the university, which resisted recognizing them, UAW Local 2322 President Patrick Burke said.

“For workers, it has meant really strong improvements in their benefits and their pay,” Burke said. He added that having a union has meant that the university now treats undergraduate residential workers at UMass Amherst like the “jack of all trades” workers they are. “They’ve been able to bargain for language that supports their training, that supports having a voice over safety and health issues.”

Residential workers at Mount Holyoke actually began their efforts early this year, when they formed MHC Collective amid the outbreak of the omicron variant of COVID-19 in order to fight for hazard pay, protective equipment and better working conditions.

After a semester of negotiations with the university, the collective secured a significant pay raise this summer, Burkhard said, boosting pay from around $4,000 a semester to closer to $8,000. Mount Holyoke RAs, unlike residential workers at some other colleges, don’t receive housing subsidies for their work.

Unionizing was the next step in order to ensure that workers keep those gains and continue to improve working conditions, Burkhard said.

Unlike Wesleyan and Grinnell, Mount Holyoke has declined to voluntarily recognize the MHC Collective, pushing them instead to an NLRB election. That’s despite the fact that around three-fourths of all eligible workers have signed cards, according to Burkhard.

“If they don’t agree to recognize on the basis of organizers signing cards, it’s basically forcing workers to have two elections,” Hammonds said. “Workers need to say twice that they want it.”

It can take weeks or even months for the NLRB to schedule a union election, depending on whether an employer challenges the proposed bargaining unit.

“And of course it is in that space between when you see a lot of the sort of anti-union work happening by the employer,” Hammonds said.

Burkhard said that the union expects to vote in its NLRB election “sometime this semester,” though no firm date has yet been set.

“It’s super exciting to be a part of this moment right now where student workers are finally being recognized,” Burkhard said. “For me, this experience has been so powerful.”

Court finds unionizer’s activities to be harassment towards former supervisor By Jonathan Gerhardson WEST SPRINGFIELD — Dan Arlin had been a driver for UPS...